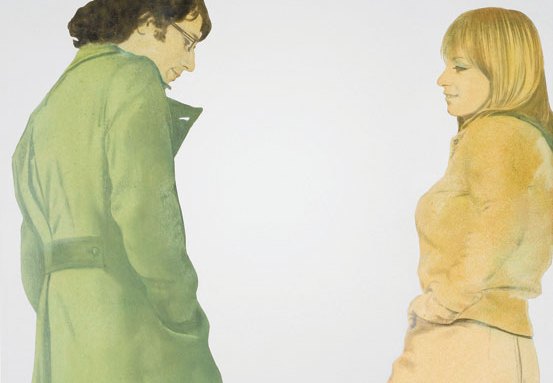 “MICHELANGELO EYE TO EYE” is the English title given to the final work of Michelangelo Antonioni, a brief documentary of 2004 in which the frail, 92-year-old director communes with his namesake’s great carved figure of Moses. This month brings a more mediated but nonetheless suggestive encounter between two Michelangelos: the publication by Steidl of Antonioni’s Blow-Up, a monograph on the landmark film with trim, penetrating essays by Philippe Garner and David Alan Mellor, and the opening at the Philadelphia Museum of Art of the deeply researched retrospective “Michelangelo Pistoletto: From One to Many, 1956-1974,” curated by Carlos Basualdo. Beyond the calendar coincidence, the connection grows personal. For me, like many others of my generation, Blow-Up triggered a lifelong fascination with the processes, seductions and puzzles of photography. I’ve long kept my art historian’s eye on the complex role played by photography in Pistoletto’s work as well as on the photographs taken of his art by Ugo Mulas. Indeed, seeing Mulas’s photographs in the late 1970s was for me the first revelation of a connection between the two modern-day Michelangelos.

Antonioni filmed Blow-Up in London during the spring and summer of 1966; before the end of the year it had been released in the U.S., and a special jury prize at Cannes would follow in May 1967. In the spring of 1966, the Walker Art Center in Minneapolis presented “Michelangelo Pistoletto: A Reflected World,” a touchstone exhibition of Pistoletto’s “mirror paintings,” which feature racings of photographed figures and objects applied to polished stainless steel, a surface that incorporates ambient reflections into a changeable, forever unfinished composition. Blow-Up tells the story of Thomas, a jaded fashion photographer in hyper-hip London who comes to believe that the photographs he shot in a park have inadvertently recorded the scene of a crime. Yet with each enlargement of the key evidentiary picture, the area that seems to represent a half-hidden corpse loses resolution, eventually dissolving in a granular field. For Pistoletto, the photographed figure remains reliable and static, a condition countered by the moving viewer, who “enters” the mirror painting like an anthropologist whose mere presence alters the situation he has come to observe. Photographic at birth but animated by reflections, a mirror painting is neutralized in reproduction as irrevocably as enlargement erodes the documentary photograph’s purported truth.

GARNER AND MELLOR are not so much concerned with the cinematic status of Blow-Up as with the visual culture of mid- ‘60s London, where it was filmed. Ranging from the fashion world and crime tabloids to the studios of photographers and painters, they lead a grand tour that recapitulates the visual education of Antonioni himself. Introduced to the painter Ian Stephenson (whose divisionism-derived technique surely reminded the director, a knowledgeable collector, of canvases by Italian Symbolist and Futurist painters), Antonioni was moved to add a painter to his cast of characters. He is an abstract artist, whose compositions of accumulated strokes arrive at meaning over time-the opposite of the loss of significance that accompanies the decomposition into grain of the photographic blow-up.

It was precisely the clarity of the photographic image that recommended it for the stainless steel mirrors. In Suzanne Penn’s essay on Pistoletto’s materials and processes for the Philadelphia catalogue, the artist explains, “I had to go find something that was objective, like the reflection, to be used for the figure. It is why I couldn’t escape photography.” How extraordinary are those words “couldn’t escape photography,” in their combination of resistance and resignation. The catalyst in Pistoletto’s transition from conventional painting was the sight of his own reflection in a varnished black surface. He painted around that shadow with silver. The figure emerging from glossy black and silver (its consistency is described by Penn as “granular”) evokes nothing so much as a darkroom event, just as the later, mercurial compositions on metal plates, which change with the angle of view, seem like distant cousins to the daguerreotype. Seeking a flatter and more uniform surface, far from the gestural “matter” of postwar painting, Pistoletto turned to stainless steel (which avoids the depth of a glass mirror), affixed tissue-thin tracings of photos and sealed the whole with varnish. The image is not “on” a support but seemingly continuous with the ground-as is true of a photograph.

Penn establishes that Pistoletto counted many photographers among his friends, and that he was responsible for every photographic element of the mirror paintings, posing the models, positioning the lights, framing the shot, choosing certain figures to duplicate with additional tracings of the printed original and conceiving groupings that had never occurred in reality. Although Pistoletto controlled everything but the shutter release, he is a photographer no more than Thomas Demand is a sculptor. Discussing the addition of color to a black and white tracing, Pistoletto invokes Titian and the Venetian School of painting, not the making of a hand-painted photograph. Since photography never rose above the level of a means to an end in the reinvention of painting, it seems to have possessed for him no added value, symbolic or sentimental. Yet certain photographic exceptions in Pistoletto’s oeuvre suggest otherwise.

BETWEEN DECEMBER 1965 and January 1966, Pistoletto created his initial series of so-called Minus Objects, eccentric sculptures, extremely heterogeneous in form and material, often implying a social or domestic purpose. Among the Minus Objects is an enlarged and aggressively cropped photograph of a smiling Jasper Johns. Its singularity can’t be overstated: presiding over the human-scale, unique objects is a photo-based readymade showing a rising contemporary art star. Pistoletto’s reproduction of a photograph not of his own making (it was copied from an exhibition invitation) and the encoded references to the new international art order mark a radical departure from the presentness and everyday materiality that prevail in the Minus Objects.

Among those who came to see the Minus Objects in Pistoletto’s studio that January was Alighiero Boetti. The following year Pistoletto portrayed his new friend in Alighiero Boetti Looking at a Negative (1967), a mirror painting that involved an exceptional measure of manipulation: a  photograph was reshot to generate a negative, which was then applied to the mirror with a gelatin-transfer process. The negative remains materially distinct from the tracing of Boetti. (The contact between the Torinese artists must have been decisive. In 1967, Pistoletto wrote about the divided self-not the reflected Other-in the essay “Famous Last Words.” The next year, Boetti photomontaged two pictures of himself to create Gemelli, Twins, initiating a career-long investigation of his own double identity.)

A third and profound exception in Pistoletto’s otherwise instrumental regard for the photograph was prompted by his friendship with Ugo Mulas. Mulas was one of the most adroit photographers of art (an underappreciated skill), and of Pistoletto’s in particular. Arguably his most brilliant effort in this genre is a photograph of Pistoletto’s works taken in a room of the 1970 exhibition “Vitalità del Negativo” in Rome. By positioning himself before a mirror painting that incorporates the tracing of a female nude photographed from the rear, and with another mirror painting of a frontal nude visible on the wall behind him as if it were reflecting the non-existent “front” of the rear-viewed figure, Mulas diagrams Pistoletto’s ricocheting visuality. He underscores Pistoletto’s pictorial dialogue with painters from Velázquez to  Ingres and Manet even as he validates Pistoletto’s aversion to reproduction by claiming the photograph for himself: situated in the center of the composition, hunched over a tripod, Mulas dramatizes a “shoot,” not of a Pistoletto mirror painting but  of a reclining model-and the viewer, for that matter-who is looking at Mulas’s camera.

During his final working years, 1970-72, Mulas engaged in a series of photographic investigations, paired them with commentaries and called them “Le Verifiche,” the verifications or proofs. He proceeds through the means of photography, considering lens, caption, exposure, enlargement. Enlargement alone gets two treatments, a rather standard one based on a shot of a commercial sign, and a far less conventional one, a view of the sky, progressively enlarged (using a detail, as does the character Thomas) to a blow-up of 3½ meters. Mulas writes, “At that point the sky disappears and what remains is only a granular surface. The dominant elements are the clumps of silver salts, the grain, and you realize that it is possible to obtain the  same image by photographing a wall, that the image is then reversible, inter- changeable.” Or as Thomas might add, unbelievable.But the deeper connection here is not with Thomas but with the amateur photographer Michel, the protagonist of Julio Cortázar’s “Blow-Up,” the short story that inspired Antonioni, and which Mulas surely knew well. At the story’s end, Michel, utterly unhinged by photography’s rupture of time and the human narrative, enters his own blow-up and stares-for eternity? at the sky. Antonioni would bring this through-the-looking-glass photo- graphic rapture down to earth in his painterly conclusion of Blow-Up: Thomas vanishes from a grainy monochrome field that in a previous tighter shot had rep- resented bright green grass.

“Le Verifiche” opens with a contact sheet of a blank filmstrip-a 36-unit readymade-and closes with that same image rephotographed through broken glass. An allusion to the Large  Glass, the last verifica is dedicated to Duchamp, whom Mulas had photographed in New York in the mid ’60s and here credits as an inspiration. In 1974, the year after Mulas’s death, Pistoletto completed another photo-based rarity in his oeuvre, a mirror painting for which he traced someone else’s picture: Mulas’s portrait- a gift from the late photographer-of Duchamp seated on a Brancusi. That work is reproduced here in a canonical photograph by Paolo Mussat Sartor. The photograph captures no additional reflected figures, but many more artists than the one depicted are present in the picture.

Special thanks to Gabriele Guercio and Romy Golan.