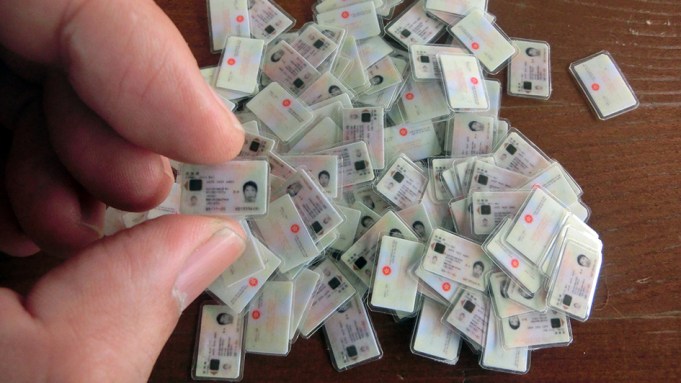 Jane DeBevoise is the chair and Michelle Wong is a researcher at Asia Art Archive in Hong Kong. Here, they recall their favorite 2014 exhibitions from the “Pearl of the Orient.”

“Great Crescent: Art and Agitation in the 1960s—Japan, South Korea, and Taiwan,” at Para Site

This well-researched exhibition was the first of many exhibitions this year related to the Hong Kong protests. The agitation practices of the three geographies took various forms and left different traces—ranging from photographic and video documentation to self-published magazines—all unfolded almost lyrically in Para Site’s compact space.

Until its physical location opens its doors in 2018, online exhibitions remain one of the major vehicles for M+, Hong Kong’s 21st-century visual culture museum, to reach its audience. Throughout its run time, more than 4,000 images of neon signs were submitted to NEONSIGNS.HK. The locations of these signs were marked and displayed on the online exhibition’s map function, making the exhibition a useful navigation tool for neon enthusiasts.

This exhibition contained pockets of art historical classes that may be difficult to come by even in Hong Kong’s universities—from travel routes of Chinese painters to the photograph with Picasso that all visitors to Paris snap. It was a treat to see works from the Hong Kong Museum of Art collection by artists Zao Wuki, Zhu Dequn, Zhang Daqian and other, in addition to those from institutions like the Musée Guimet, Musée d’art Moderne de la ville de Paris, and the Centre Georges Pompidou—offering reminders of what gems they are. Liu Haisu’s Clouds on Mount Huang (Hong Kong Museum) and Lin Fengmian’s Blue Sky (Musée Cernuschi, Asian Arts Museum of Paris) were particularly unforgettable.

“Can We Live (Together),” at Arts Promotion Office

A “Dai Pai Dong” of a show (“daipai dong” is a kind of outdoor food stall in Hong Kong where dishes are ordered based on what is available, and diners share tables and socialize with strangers). Can We Live (Together) saw the gathering of a cluster of Hong Kong-based self-organized, artist-run initiatives led by a young generation of energetic, politically savvy cultural practitioners (who are well-acquainted with one another). These groups included Wooferten, the curator of the show; Tuna Prize, the art prize organized by students of the Baptist University’s Academy of Visual Arts, a tongue-in-cheek reference to the Turner Prize; and Hong Kong House of Stories, amongst others. The shared concerns that drive these initiatives—and the exhibition—have shaped individual practices, community relationships, and modes of meaning-making.

YIP Kin Bon, “Almost black, the white terror Almost white, the black humor,” and WU Siu Man “Please keep it in your mind, the memory before I die” at 1a Space

A double solo exhibition of two emerging Hong Kong artists whose practices show deep engagement with concepts, materiality and craftsmanship. Character by character, Yip’s delicate paper cut-outs formed the speech made by Qiao Xiaoyang, chairman of the Law Committee of the National People’s Congress, who asserted that Hong Kong’s chief executive must be someone who “loves the country and loves Hong Kong”; Wu’s video work of two individuals performing a balancing act on wooden chairs in front of City Hall, a building erected during British colonial times, made you wonder if something might tip over, soon.

The first solo exhibition in seven years by Luke Ching, a Hong Kong-based conceptual artist. “Screensaver”  featured an array of Ching’s projects from recent years, many of which were small gestures of resistance to the government’s bureaucratic system—for instance, he became a security guard at the Hong Kong Museum of Art and successfully lobbied on the guards’ behalf for chairs to sit on while on duty. Ching is now a security guard at Polytechnic University, trying to start a campaign to give guards first priority to eat in the staff canteen.

Anyone who has met Frog King will remember his high level of energy, and the near impossibility to contain it. In “Totem,” this energy was channeled considerately, guiding visitors away from the consuming performance with which we may be more familiar, and towards the contemplative side of the artist. In this exhibition, Frog King’s early works of ink on burnt xuan paper, now rarely seen, were placed elegantly into conversation with more recent works, including large scale ink wash and wooden totem frog sculptures. A renewal of creative, youthful energy.

The visuality and creativity that emerged from the protest sites in Hong Kong have touched many within and outside the city. From banners of rallying cries to makeshift stairs that facilitated access to the sites, and post-it notes conveying immediate emotional responses, all were made with a desire to leave some trace of existence. Art here functioned not to educate or pass judgment on aesthetics—it was a way of being together, of reaching out to one another, and learning to recognize ourselves in each other.