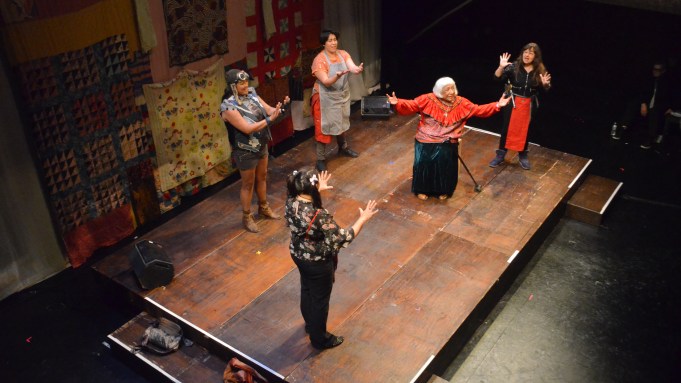 Spiderwoman Theater, an Indigenous feminist performance group, celebrated their fortieth anniversary on September 19 at La MaMa in New York with a benefit featuring an intergenerational roster of musicians, storytellers, actors, activists, and others, all united by a sense of joy in sharing the work and play of performing. Founding members Muriel Miguel and Gloria Miguel were in attendance; their sister Lisa Mayo, the third founding member, passed away in 2013. Members of the Kuna and Rappahannock nations, the sisters have reworked classic plays, like Aristophanes’s Lysistrata and Chekhov’s Three Sisters, to incorporate the concerns of Native women and a contemporary sense of humor—hallmarks of their original plays as well as their adaptations. Their legacy, and that of their community writ large, was palpable in the performers’ many heartfelt expressions of gratitude—for Spiderwoman’s theatrical work, for their efforts in education and collaboration, and for the people they’ve brought together over the past four decades.

The benefit took the form of a variety show, with a range of performances, presentations, and testimonials by friends, family members, and collaborators. Live performances were interspersed with prerecorded video tributes, as well as projected slideshows of documentation from the past forty years: archival images depicted the then-young members of Spiderwoman Theater in costume in early plays like Lysistrata Numbah! (1977), which satirized gendered stereotypes, and The Fittin’ Room (1980), which scrutinized societal expectations of both heterosexual and lesbian women. Engaging a more historical approach, Gloria’s daughter Monique Mojica presented a scene from the work-in-progress Side Show Freaks & Circus Injuns, co-written with LeAnne Howe, in which a Native woman in the early 1900s has been taken from her community and institutionalized; playing the protagonist, Mojica repeats the phrase “asylum for insane Indians” to haunting effect. The play draws on the experiences of the Miguel sisters as performers in the sideshow of the Golden City Amusement Park, known as the “Coney Island of Canarsie,” in the 1930s. Mojica and Howe’s play addresses the violence perpetuated against Indigenous people, especially women—a concern that permeated the evening—while alluding to the ways both trauma and knowledge are passed down through generations.

Many other contributions, however, were more lighthearted. Sid Bobb, one of the evening’s emcees, opened with a sketch in which he and two others, all in life jackets, “paddled” onstage with oars in hand. After cracking a few jokes, Bobb announced that he was about to present a “sacred, spiritual performance”—what turned out to be a slapstick striptease down to a pair of skintight pleather leggings marked on the backside with white tape spelling HO (a pun, perhaps, both on the slang term that might be used to insult someone stripping and on “How,” a greeting used in stereotyped representations of Native Americans). In an excerpt from the play Don’t Feed the Indians, which premieres at La MaMa on November 2, Muriel Miguel’s daughter and granddaughter, along with other actors, wore matching T-shirts with “No More Tom Tom” printed on the back. It was a humorous sketch that skewered both the pretensions of theater folk and stereotypical misunderstandings of Native life and culture. While some of their jokes felt a bit predictable, the performance elicited knowing laughter from the audience. Donna Couteau Cross and Joe Cross, a husband-and-wife team who founded the Leaf Arrow Storytellers, offered another comedy sketch, portraying a marital dispute; they exchanged mean-spirited jokes about each other and about “Indians,” treating humor as a means of coping with experiences of both the everyday tensions of partnership and systemic racism—and the ways in which the latter can intensify the former.

Native and folk traditions suffused the program, transformed but also intensified by the context of experimental theater. Ceremonial performances by the SilverCloud Singers, introduced respectively as an “honoring song” and “singing out the drum,” bookended the evening; other musical contributions ranged from the Thunder Bird Sisters’ folk songs, inspired by personal narratives of love and loss and Indigenous struggles for justice, to White Mountain Apache artist Laura Ortman’s densely layered experimental composition on electric violin. The set engaged traditional practices, featuring textiles—floral sheeting, quilts, brightly colored and patterned swaths of fabric—collaged in panels of a hodgepodge tapestry. Muriel Miguel has described cloths like these as healing pieces;  in a video for a Kickstarter fundraiser, she says reflects on the questions of self and community— “Who do you love? Is there a secret? What is a dark place?”—that are folded into each piece.

Yet even as traditions are preserved, they are reshaped by their contemporary context—and, here in particular, by the histories and conventions of the downtown performance scene that arose in the East Village and SoHo in the 1970s, when artists and performers embraced collaboration, informality, and experimentation to produce work that bridged visual art, theater, dance, and music. Soni Moreno, a member of the original cast of Hair, performed a song from the traditions of her Mayan and Apache/Yaqui heritage. Hortencia and Elvira Colorado, Nuhu/Guachichil storytellers and activists involved with experimental and popular theater in the 1960s and ’70s, reflected lovingly on highlights from their decades of work and friendship with Spiderwoman Theater, from a New York Times review panning their take on Chekhov’s Three Sisters, to incidents when they were mistaken for Spiderwoman Theater on the street, first in the 1970s before they had met the Miguel sisters—and then again earlier that evening, before the benefit performance.

The group’s deep ties to the downtown performance scene were reflected in several numbers. Performance artist Carmelita Tropicana, who developed her over-the-top, cross-genre style in the 1980s at New York’s WOW Café Theater, served as an emcee, and Bette Bourne and Paul Shaw of the drag troupe Bloolips offered a campy scene from The Importance of Being Earnest, made even funnier by moments in which Bourne, playing Lady Bracknell, attempted to feed Shaw his missed lines. These theater-scene contributions evoked what feels like a bygone era—a time of informal community and collaboration, at once lighthearted and urgently serious, when artists were less burdened by the pressures of career and capital than they are today.

For the final performance, Gloria Miguel took the stage with four other women of various ages; they danced to a recording of Frankie Valli’s “Can’t Take My Eyes Off Of You,” while Gloria took a seat and danced in her chair. It was a fitting conclusion to a long evening of tributes to Spiderwoman: generous and amateur in the best way (at one point, the women tossed candy trinkets into the audience). The dance emphasized intergenerational exchange, and exuded joy and gratitude for the interlocking histories of performance on display. To mark the end of the evening, the SilverCloud Singers “sang out the drum,” chanting and playing drums as they led the way out of the theater with performers behind them and the audience following. Performers and spectators, Native and not—everyone walked out together.