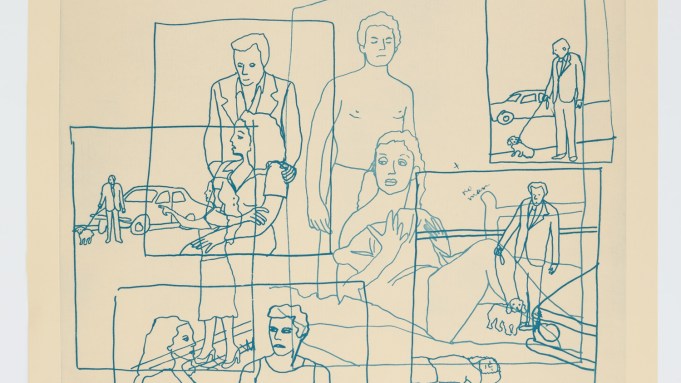 Ida Applebroog has turned to posters, broadsides and social networking to disseminate her elliptical messages.

“I held it / I caressed it / It shit in its pants,” reads a post by Ida Applebroog on her Facebook page. At once scatologically blunt and emotionally suggestive, it is of a piece with innumerable outbursts, complaints and observations—sentences and phrases overheard, read or snatched from TV—that Applebroog has been recording for decades in journals and notebooks. Over the past year, she has digitized these and other texts in various fonts, recycling them in a range of mediums, formats and scales. Many are about to appear in her installation at Documenta 13 in Kassel, opening June 9, for which she has produced some 750,000 offset posters and broadsides to be taken away for free, torn from large pads on the walls or picked up from wire newsstands. They will also be walked around on sandwich boards and, combined with digital photos, drawings and paintings, mounted on the walls. 1 And, of course, she will continue to share them with her 5,000 friends on Facebook.

Among the texts, which can be as elliptical as the drawn and painted images for which Applebroog is best known, are diaristic allusions to her autobiography—a level of self-exposure that is relatively new for this artist. When I visited her studio this spring, she told me that she was for years excruciatingly bashful. Her mother nicknamed her, in Yiddish, “Chaitke’s koo,” referring to a story of a cow too timid to give milk. “As a child,” she writes, “I was too shy to go to a neighbor to borrow sugar, eggs, or whatever for [my mother].” 2 (Applebroog later used the image of a tiny girl riding a huge cow in a number of works.) At her studio, she showed me a photograph of the members of the feminist Heresies collective on a retreat in 1978; though she was present at the event, she was absent from the snapshot, because, as she told me, she was too shy to have her picture taken. Now, however, at age 83, she’s in the mood to make her privacy public. As she recently informed me in an e-mail, “Nothing is sacred.” 3

Applebroog first went public with her confessional turn in 2010, in her installation Monalisa at Hauser & Wirth in New York. The tony gallery was newly representing her in an arrangement (undisclosed in its specifics) that allows her a degree of economic security; having believed that she would be forced to leave the SoHo studio she had occupied for decades, she now has the means to stay, hiring assistants who, among other tasks, help her go through boxes and boxes of old artworks. Among her many finds was a body of work that she had half forgotten. In 1969, living in San Diego and raising four children, she retreated every night to the bathtub for a hot soak in peace. She brought her sketchbooks with her and proceeded to create a series of 150 delicate pen-and-ink renderings of her vagina. (She prefers the term, though technically the subject is her vulva.) A year earlier, she had been hospitalized for depression, and she now considers her “Vagina Drawings” to be the map of her recovery, the reconnection to her self and to her artistic life. She brought the drawings with her when she moved to New York in 1974; rediscovering them 35 years later, she gathered them up for her Hauser & Wirth show.

The drawings were fragile and water-stained. This was no deterrent to Applebroog, who turned to digital modalities to process them. Scanning and manipulating the originals, she printed the imagery out on Gampi and Mylar vellum, with hand additions. The result is a remarkable self-portrait, at once intimate and archetypal. Like a face, her vulva becomes recognizable as a particular vulva in endless permutations, as if undergoing changes of mood. For the Hauser & Wirth installation, she hung the drawings on a one-room house of braced wooden scaffolding. Like newspapers posted on a kiosk or wall, they were now available for public consumption. 4

One text Applebroog likes and has often used of late: “People who are normal (i.e., sane, sensible) don’t try to open lines of communication with total strangers by writing them a series of disjointed, weird, cryptic messages.” 5 Is she, then, abnormal? Has she always been? She has long been fascinated with the broken language associated with mental breakdown-including asyndetic speech, in which conjunctions are left out. She herself, when admitted to the hospital in San Diego, found it nearly impossible to form coherent sentences, and when asked her name, replied, “Applebrrr, brrr, brrrgh,” as she tells it. Her maiden name was Appelbaum, but in 1975 she took the name Applebroog, honoring the most vulnerable moment of her life, when speech failed her.

Living in New York in the late 1970s, Applebroog began self-publishing a series of books in which she reproduced her “Stagings,” simple little paintings of people-sometimes headless, sometimes naked-on too-small stages, performing mysterious actions.[pq]Her maiden name was Appelbaum, but in 1975 she took the name Applebroog, honoring the most vulnerable moment of her life, when speech failed her.[/pq]Producing these books in editions, she called them “performances.” Each book in the series had a different phrase on the cover, printed in block letters: “STOP CRYING”; “YOU WHAT?”; “IT ISN’T TRUE,” etc. She then mailed the books to recipients all over the world. While some-the guru of mail art, Ray Johnson, and Robert Kenedy, then curator at London’s Victoria and Albert Museum (he died in 1980)-appreciated the packages, many either didn’t respond or, if they did, expressed annoyance. “TAKE ME OFF THE MAILING LIST,” wrote Jane Yockel of Performing Arts Services in New York, “I ALREADY HAVE A LIFETIME SUPPLY OF COLORING BOOKS.” While the “coloring books” contained some text, their “disjointed, weird, cryptic messages” were essentially pictorial. Applebroog was communicating, but remained guarded. She was disseminating, but laboriously-unlike today, when she is exploiting the easy spread of the Internet.

Following her Monalisa project, she has increasingly embraced digital technology, which allows her to process the images and language she mines from her notebooks in endless permutations. Her movement is limited these days due to rheumatoid arthritis. The digitizing of materials allows her to realize large as well as small scale, and plenitude of content, and to resuscitate imagery from earlier in her career. For an exhibition at Hauser & Wirth in London in 2011, she created an artist’s book reproducing a 1974 sketchbook of storyboard-like drawings in blue and brown ink on vellum. Couples speak earnestly, fight, kiss. One woman is kicked, another shot, a third drowned. Pages and pages of vignettes overlap through translucent surfaces. Liking the effect, Applebroog adapted some of the scenes in a recent group of etchings, digitally superimposing them before having them transferred to a plate. 6 The computer allows her to grant free rein to her still restless imagination, devising expanding contexts for images that she produces in various mediums, from mechanically reproductive to painstakingly hand-wrought.

At her studio this spring, Applebroog was seated at a table shuffling small printouts with texts on them, figuring out what would go where at Documenta, and how they would look. White sandwich-board maquettes leaned against the walls, printed in black, menacingly off-kilter capital letters: “I’LL KICK DOWN THEIR WALLS”; “STOP THE MUSIC I’M AN ARTIST GODAMMIT”; “OCCUPY KASSEL,” etc. On the wall was a huge portrait of a monstrous woman. (“Who is it, Ida?” I asked. “WHO? Me, of course. I’m a narcissist-me, and every single artist who’s alive today.”) Nearby, a blown-up, handwritten command had an unsettling intimacy: “Teddy sit up I want a divorce.” Stacks of dark red bound notebooks bristling with colored Post-its rested on every surface. Applebroog’s texts are everywhere, in overwhelming profusion, telling the world what it means to be an artist.

1. It is Applebroog’s second time at Documenta; she participated in Documenta 8 in 1987. Leading up to Documenta 13, she has contributed the notational artist’s book Scripts as number 42 in the series “100 Notes—100 Thoughts/100 Notizen—100 Gedanken,” Kassel, Documenta 13, and Ostfildern, Hatje Cantz, 2011.

2. From the maquette of an autobiographical artist’s book that Applebroog is in the process of making. She continues, “Later on, I learned to make use of the term ‘private person’ as opposed to shy, bashful, timid. It sounded more sophisticated.”

3. All unattributed quotes are from conversations and e-mails with the author dating to winter and spring 2012.

5. In her as-yet unpublished autobiographical artist’s book, Applebroog attributes the quote to Donald Hofstadter, as quoted in Jon Ronson, The Psychopath Test: A Journey through the Madness Industry, Riverhead Hardcover (no city listed), 2011 (she includes no page number).