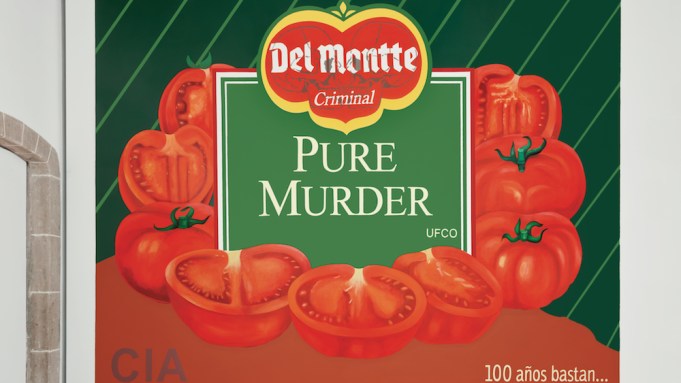 The Mexico City–based conceptual artist Minerva Cuevas explores the ways in which seemingly banal items like fruit, chocolate, and water reflect the practices and ideology of global capitalism. She employs a wide range of forms, such as rebranding campaigns that subvert a corporation’s logo to reveal power dynamics and histories of colonialism, and artist-run organizations that emulate various real-world entities.

Cuevas has regularly exhibited in Europe and Mexico for some twenty years, but, aside from appearances in a handful of group shows over the last decade, her work has not been seen extensively in the United States. However, this fall, US audiences have an opportunity to look more closely at her practice. The artist is participating in the two-year, research-based initiative “Public Knowledge,” launched by the San Francisco Museum of Modern Art and the San Francisco Public Library this past April. Cuevas was also invited to create a mural at the Dallas Museum of Art, where it will be on view from September 2, 2017, to February 11, 2018, and she is included in Prospect.4 in New Orleans. In addition, she has a two-week residency this September at the Kadist Art Foundation in San Francisco, which will lead to a show there in 2018.

Cuevas’s multipart “Del Montte Campaign” (2003–) responds to the corporate exploitation of natural resources in Central and South America. In exhibitions, the project has consisted of sculptural elements (grocery-store-style stacks of canned tomatoes with labels that read pure murder) and billboardlike murals. She alters the name of Del Monte Foods to “Del Montte,” a reference to José Efraín Ríos Montt, the president of Guatemala from 1982 to ’83, who used military strikes against the Ixil people, an indigenous Maya ethnic group. Montt was staunchly anti-Communist and, as a result, received support from the US, which shipped millions of dollars of military equipment to fuel a conflict that the UN has called genocide. One distinct strategy that he used to control the Guatemalan rural population was the social program Frijoles y Fusiles (Beans and Rifles). Those villages that the military deemed to be allied with the government received food while resisters were massacred. When we consider Guatemala’s history as a banana republic and US interventions into Guatemalan politics on behalf of the United Fruit Company in the 1950s, Cuevas’s “Del Montte Campaign” highlights the geopolitical intersections of food, state actors, and corporations, as well as the racist violence perpetrated against indigenous communities for both profit and political power.

Cuevas established the Mejor Vida Corp. (Better Life Corporation) in 1998 in Mexico City as a kind of umbrella organization for projects like the “Del Montte campaign.” Initially renting an office on the fourteenth floor of the Latin American Tower, a modernist architectural icon that is one of the tallest buildings in the city, Cuevas offered free services, such as sweeping up debris in public spaces, and products, like subway tickets and barcode stickers to reduce the prices on goods from grocery stores.1 She drew her first clients from the people who came in and out of the building to conduct business. Art world iterations of the Mejor Vida Corp. have appeared at the Museo Tamayo in Mexico City, Z33 in Belgium, and the Schirn Kunsthalle Frankfurt. In those contexts, the participants were museum visitors. In the case of the Museo Tamayo, Cuevas requested that the museum allow free admission. Institutional officials refused, but one of the Mejor Vida Corp.’s services is to print student ID cards, enabling visitors to get free entry to the museum.2 Another campaign listed on the organization’s website critiques Mexico’s national lottery for serving private interests. In posters and murals, Cuevas disrupts the red heart of the lottery logo with bloodlike drips and the text en méxico 46,000,000 de personas viven en pobreza (In Mexico 46,000,000 people live in poverty).

Does the Mejor Vida Corp. intervene in everyday life or is it a conceptual gesture that has no practical application?3 Cuevas has insisted that it is not ideologically motivated activism. For one reason, she intends the website to emulate for-profit businesses. It also has a very limited capacity, and it does not advocate for an explicit set of ideals. Artist Tania Bruguera, however, includes the project in her online archive Arte Útil (Useful Art) because of its practical effects for the user.4 At the same time the Mejor Vida Corp. functions like Walid Raad’s Atlas Group, in that it exists through the labor of one person but implies a collective effort, turning the organization into a representation of collectivity.

Particular qualities of collectivism and collaboration differ from one artist-run organization to another, but these entities are in many ways predicated on resisting the traditional dynamic of the artist as an active creator and the viewer as a passive consumer.5 For the collectivist work to exist, there must be some sort of social interaction between at least two people. In Cuevas’s case the collaboration starts with the participant asking for a student ID card and continues through its every use.

Unlike the Mejor Vida Corp., Cuevas’s International Understanding Foundation (IUF), structured like an institution mandated to serve the public good, features a mission statement and a board of trustees. It began in 2016 as her contribution to a group exhibition at the Museum Ludwig in Cologne, where it consisted of an architectural space resembling a three-dimensional Mondrian grid painting arrayed with various items. There were archival photographs of a 1980s punk-band performance in which the backdrop was a 1920s social-protest graphic depicting workers in blocky black-and-white shapes with the text tag der freiheit (day of freedom).6 She paired Warhol’s disaster painting 129 Die in Jet! (1962) with its source, the front page of the June 4, 1962, New York Mirror, thus underscoring how an artwork can traverse the border between the real and the symbolic. Cuevas also included a rock she was given by Jimmie Durham as a gift and a Mickey Mouse figurine holding a piece of white paper bearing a quote from Bertolt Brecht: what happens to the hole when the cheese is gone? She collaborated with a composer in Cologne to write an iuf hymn, which was performed by a choir made up of administrators at the Museum Ludwig. Together, the installation wove a tapestry of social and political narratives that moved in and out of popular and more rarefied forms of culture.

The IUF can fit into different contexts, and Cuevas plans a presentation of it for her exhibition with the Kadist Foundation in 2018. This show will also draw on her research for “Public Knowledge.” Organized by SFMOMA’s Deena Chalabi, Dominic Willsdon, and Stella Lochman, “Public Knowledge” addresses recent shifts in the Bay Area resulting from the technology industry boom and how those changes affect cultural memory.7  The boom has led to rising socioeconomic inequality, pushing families from their traditional communities and pricing out cultural spaces.

For “Public Knowledge,” Cuevas has undertaken a residency at the San Francisco Public Library. Her work there is both an investigation into an archive and an engagement with the civic structure that maintains the archive. The primary theme of her research is fire, which is a paradoxical element, given its threats and benefits.8 She considers it a metaphor for revolution, flames being one visible manifestation of social protest. But fire poses a threat to libraries, notoriously destroying the ancient Library of Alexandria in Egypt in several blazes between the first century bce and the seventh century ce. On the other hand, the technology to start and control fire contributed to the natural and cultural evolution of the earliest human communities. Cuevas is also interested in the idea that fire, like information, spreads, and the spread of information is what underlies San Francisco’s technology boom. In this sense, there is an inverse relationship between the destructive characteristics of fires in the Bay Area—the 1851 fire that destroyed almost a quarter of the city or, more recently, the 2016 Ghost Ship fire in Oakland—and the ways that technology has metaphorically ignited economic development.

Cuevas examines how various social forces use images, leveraging and activating them to achieve their goals. For instance, the “Del Montte” project riffs on the way that advertising communicates visually with a consumer. But activism, the dissemination of countercultural resistance, also depends on images, which are put forth in rallies, marches, mass mailings, and the media. Cuevas knows this well since she has been documenting these forms of activism with her long-term project Disidencia (2008–), a video archive of protests in Mexico City. Protests often rely on performativity and visuality and thus are forms of representation. In this sense, Cuevas both reveals and implements the political power of images.

1. To my mind, these documents are acts of civil disobedience, pushing up against the limits of legality. I have never heard of Cuevas or any of her clients being arrested for using her items.

3. The notion of political efficacy is hotly contested regarding socially engaged art practices. One example of this debate was sparked by Ben Davis’s essay “A Critique of Social Practice Art: What Does It Mean to Be a Political Artist” in the International Socialist Review, July 2013. The response, which started on social media and then was facilitated by the nonprofit Blade of Grass through a series of blog posts (to which I was a contributor), was published in Public Servants: Art and the Crisis of the Common Good, ed. Johanna Burton, New York and Cambridge, New Museum and MIT Press, 2016.

4. For more on Arte Útil, see www.arte-util.org. According to the website: “The notion of what constitutes Arte Útil has been arrived at via a set of criteria that was formulated by Tania Bruguera and curators at the Queens Museum, New York, Van Abbemuseum, Eindhoven, and Grizedale Arts, Coniston, UK. Arte Útil projects should: propose new uses for art within society, use artistic thinking to challenge the field within which it operates, respond to current urgencies, operate on a 1:1 scale, replace authors with initiators and spectators with users, have practical, beneficial outcomes for its users, pursue sustainability, and re-establish aesthetics as a system of transformation.”.

5. Among noteworthy artist-run institutions that engage the politics of everyday life are e-flux’s Time/Bank (2009–), which proposes an alternative economic model based on the exchange of time and skills; Women on Waves (1999–), an organization founded by activist physician Rebecca Gomperts that provides abortions in international waters, outside the jurisdiction of countries in which the practice is outlawed; Tania Bruguera’s Immigrant Movement International (2010–), an advocacy organization for immigrant rights; Rick Lowe’s Project Row Houses (1993–), which offers art, education, and social services to Houston’s Third Ward; and Theaster Gates’s Rebuild Foundation (2010–), a platform for neighborhood transformation on Chicago’s South Side.

From the Gold Rush to the New York Sour: 7 Refreshing Whiskey Cocktails Perfect for Summer

As a Child, Hal Baddie’s ‘Doll Activities’ Were Hidden. Now, She’s Using Them to Take Over TikTok