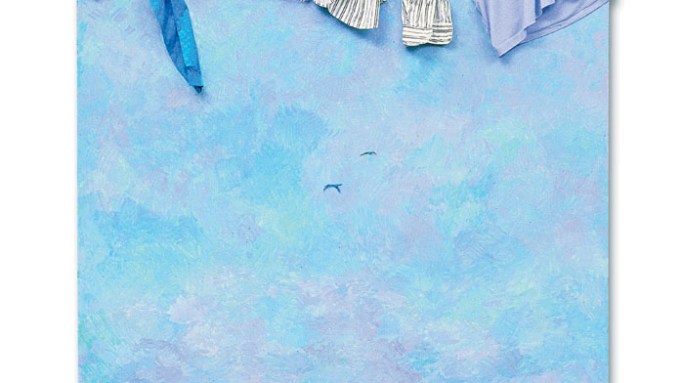 During Marc Chagall’s visit to Moscow in 1973, a young artist asked him whether it was better to join the nonconformist art circles in the USSR or to emigrate. Chagall replied that if being a nonconformist artist meant having no exhibitions at home, one should leave. Ilya Kabakov, who also confronted this dilemma, admits that he nevertheless “would have stayed [in Russia] forever if Perestroika hadn’t come.” 1  When he finally did leave, in 1987, he was determined to compensate for 30 years of missed exhibition opportunities.

Today Kabakov is best known as a magician of  “total installations,” a genre he first adopted in his Moscow studio in 1985, when he built The Man Who Flew into Space from His Apartment. Re-created in Kabakov’s 1988 debut show at Ronald Feldman Gallery in New York, this work consisted of a shack with a boarded-up entrance through which the viewer gazed at optimistic pictures of Soviet life collaged on the interior walls, where they clashed with the dismal furnishings of a communal apartment. Perhaps agonized by just these kinds of dichotomies, an unseen character had apparently escaped through the ceiling, leaving a spectacular gash.

This environment clearly communicated Kabakov’s frustration over the sociocultural limitations of Soviet life and his expectation—during the first year of Mikhail Gorbachev’s rule—of the soon-to-come freedom of travel. Despite the deeply personal meaning of The Man Who Flew into Space, Kabakov chose, as he has done in most of his work, to speak in the third person, using invented characters as a way to obscure his authorial “I.”

Kabakov’s irrepressible zeal to exhibit, along with the scale and cost of his projects (lately within the means only of the Russian oligarchs and their ilk), led him to break a vow he made in 1998. “I know for sure that I will never return [to Russia],” 2  he said after years of shifting European residency followed by the establishment of a home in New York with his wife, Emilia, his official collaborator for the last two decades. Yet in 2004, with nouveau-riche-style fanfare, he exhibited in the State Hermitage Museum, St. Petersburg, and in 2008 he returned to Moscow for a multi-venue retrospective. As if settling scores with institutions that had long ignored him, Kabakov managed to exhibit his installation Gate (2008) in a room at the Pushkin State Museum of Fine Arts that is permanently devoted to French Impressionism. The Kabakov piece consists of pseudo-Impressionist paintings surrounding a double-door portal set in the middle of the gallery—a semi-ironic tribute to the importance of this French collection to postwar Russian modernists.

At the same time, Kabakov occupied the entire 91,500 square feet of the newly opened Garage Center for Contemporary Culture (a former bus depot built by the constructivist Konstantin Melnikov) with the mega-narrative “An Alternative History of Art: Rosenthal, Kabakov, Spivak.”  To realize this elaborate project, which reflected Kabakov’s fading hope that Russian scholars would produce a coherent textbook on Soviet modernism, he labored tirelessly on behalf of his two artist characters and made copies of his own iconic pieces (at times altered)—all to convey his personal take on the fractured history of Soviet art and on his own displacement. For the fictitious Charles Rosenthal and Igor Spivak, Kabakov created myriad paintings, drawings and kitschy sculptures with a populist bent, suggesting an open war—often staged on one canvas—between figuration and abstraction. He also employed discordant methods of display, ranging from classical modernist rooms to a setting reminiscent of the Louvre’s galleries of 19th-century painting.

In 2013, Kabakov returned to Russia for his 80th birthday, choosing to mark this anniversary with the exhibition “Utopia and Reality? El Lissitzky, Ilya and Emilia Kabakov,” which he and Emilia had organized in late 2012 at the Van Abbemuseum, Eindhoven, The Netherlands, home of the largest Lissitzky holdings outside Russia. Encompassing many additional loans, the traveling show features a variety of Lissitzky “Proun” paintings and drawings, evoking an abstract ideal, along with Kabakov’s own representational paintings and installations. It was presented in St. Petersburg at the State Hermitage Museum and in Moscow at the Multimedia Art Museum and will appear later this year at the Kunsthaus Graz, Austria. 3

Kabakov’s move from speaking through the voices of fictional characters to having a dialogue with a real modernist, and thus real history, is significant, since it allows one to better understand his entire oeuvre. The defeat of the Russian avant-garde was dramatically evoked at the entrance to “Utopia and Reality?” in Moscow. There an enlarged torn copy of Lissitzky’s iconic abstract poster Beat the Whites with the Red Wedge (1919) was suspended from the ceiling of the museum’s top floor. Beneath it, on the first floor, lay a large Kabakov sculpture of an angel partially covered with a cloth, looking as though it had crashed disastrously through Lissitzky’s tattered ideological poster image above—a symbolic reference to Mikhail Vrubel (the father of Russian modernism, known for folk and religious iconography that influenced Kazimir Malevich, Natalia Goncharova and others). The uncanny collision is a revised echo of The Man Who Flew into Space from His Apartment (displayed at the end of the show), replacing its utopian upward flight with dystopian downfall. This dialectical paradigm, emphasized at the Multimedia Art Museum by juxtaposing the two artists’ works throughout multiple floors, pervades “Utopia and Reality?” Viewers are implicitly invited to contrast the artists’ formal styles, mediums, images, politics and modes of conformity as well as resistance.

On a discursive level, the most successful pairing in the exhibition is between a reproduction of Lissitzky’s multi-wall photomontage vaunting the social and economic achievements of the USSR, made for the International Press Exhibition, “Pressa,” in Cologne in 1928, and Kabakov’s 1987 series “Holidays,” executed the year he left Moscow. Kabakov explains that the works, depicting everyday scenes from Soviet life, were made not by himself but by his character:

Some official hack artist was commissioned to make ten paintings on the theme of holidays for an ethnographic museum, or for some pompous exhibition. . . .
For some unknown reason, they ended up not being exhibited. . . . Ten years passed. . . . One day he took them out and was terrified: when he first made them they looked so festive, but they turned out to be dirty, rancid daubing! What to do? To repaint them? Too lazy. . . . And then he came up with a simple trick . . . to glue ‘paper flowers’ on them. 4

While Lissitzky, in his photomontage, defies easel painting and erases individual authorship, Kabakov, in his “Holidays” paintings, ridicules the Soviet practice of commissioned art. The juxtaposition, orchestrated by Kabakov, also exposes the degradation of the Bolsheviks’ numerous ritual celebrations.

The question mark in the title of “Utopia and Reality?” recalls one of Kabakov’s favorite devices—question/answer inscriptions in his paintings and text-and-drawing albums. Indeed, the exhibition raises many unresolved issues: Is Socialist Realist painting simply “a hack job,” unworthy of being included in art history textbooks, as held by the USSR’s first Commissar of Enlightenment, Anatoly Lunacharsky (1875-1933)? Should Soviet leaders’ monuments be protected and even reinstalled (as in the currently discussed case of the toppled sculpture of Felix Dzerzhinsky [1877-1926], the first chief of the Cheka, the state security bureau)? Or should they be removed once and for all with the kind of political audacity that Nikita Khrushchev exhibited with respect to Stalin? On a more personal level, was life in Soviet communal apartments a nightmare or a unique experiment in human coexistence? The Kabakov of the Moscow period would answer these questions with bitter disdain for the Soviet past. However, in “Utopia and Reality?,” the artist—like many Russians these days—has become less sure.

Like the “Holidays” series, the canvases recently on view at Pace Gallery, New York, are a spoof on the official painting techniques that Kabakov describes as “dirty, rancid daubing.” In the series “The Appearance of Collage” (2012) and “Vertical Painting” (2012), he converts the visual Soviet clichés into “a psychedelic dream [where] one fragment connects with the other, flowing into the other,” as he said of his artistic approach three decades ago. 5

Both series continue the discourses introduced in the “Utopia and Reality?” show. “The Appearance of Collage” reflects how the avant-garde’s montage technique was appropriated to construct a glorified picture of everyday Soviet life. “Vertical Painting” takes the device of spatial reversibility, originally developed by Soviet nonobjective artists, and applies it to figurative compositions. In each work, a scene in the bottom portion of the canvas is painted from a conventional vantage point, whereas the upper image is flipped from the horizontal to the vertical, as can be easily done in Photoshop. The colored abstract patches that infest the compositions render them even more schizophrenic, effectively shaking up the Soviet obsession with balance—a balance we know to be fake. Both series suggest the current state of collective vertigo in Russia, triggered by the constant and often self-contradictory revision of Soviet history.

There were several works in the Pace show—the installation I Catch the Little White Man (2003) and the painting The Window into My Past (2012)—replete with deep personal meaning for Kabakov. Both are revisions of seminal works from his Moscow period. The former adapts the 1983 mini-installation Little White Men, in which tiny white figurative cutouts were attached to ropes stretching across Kabakov’s studio toward the window, his usual passage to the roof. The latter is an altered reproduction of the artist’s 1981 painting Tested!, itself the copy of a copy of a Socialist Realist painting that shows a woman getting her Communist Party card back after surviving a typical 1930s purge.

These choices are particularly meaningful because the original works dealt (the former allegorically, and the latter directly) with political repression. In the reworked pieces, which clearly reject both authoritarian governance and collective authorship, Kabakov seems to have decided to speak at last in the first person. (The shift is especially paradoxical, given that the exhibition is billed as a collaboration between Kabakov and his wife, who is not a painter.) Are these indications of decreasing symptoms of what Freud diagnosed as the splitting of the self under repression, a condition that made Kabakov generate an army of characters? If so, Kabakov now seems ready to detox and reclaim his elusive authorship, free at last of the Magritte-style dictum “This is not Kabakov.”

MARGARITA TUPITSYN is the author of Rodchenko and Popova: Defining Constructivism (Tate, 2009) and The Moscow Vanguard, 1922-1992 (Yale, forthcoming).

3. The show title has varied in English translation at each venue to date. The version used in this article was formulated by the Multimedia Art Museum, Moscow.

This Exceptionally Rare Roger W. Smith Series 2 Is Expected to Reach $400,000 at Auction