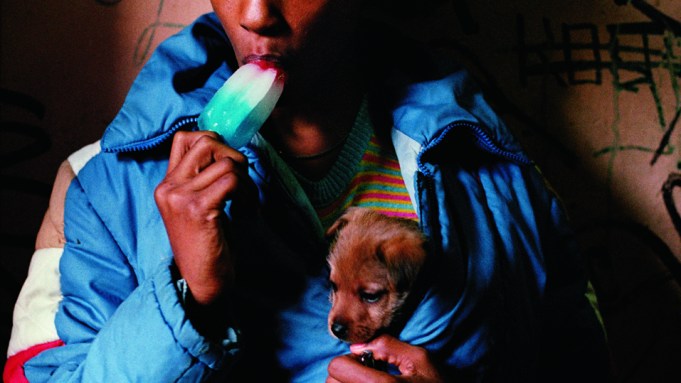 In the late 1980s, Brooklyn-born Puerto Rican photographer Joseph Rodriguez spent five years in northeastern Manhattan making pictures of the working-class Puerto Rican and black residents of Spanish Harlem, an area known affectionately as El Barrio. His photographs are counterpoints to the once pervasive depictions of a place identified widely with a supposed culture of poverty, its people the archetypes for the irredeemable black and brown subjects of late twentieth-century America’s urban crises. The fourteen large-format color prints that were shown at the Bronx Documentary Center’s storefront gallery this past winter, accompanied by images emanating from two slide projectors at the center of the room, confront the dehumanizing effects of structural inequality and municipal disinvestment. Yet the scenes Rodriguez captured also affirm that these conditions did little to extinguish the vibrancy of kinship and other social ties at the heart of a community.

The photographs were presented without captions save for a brief exhibition summary in English and Spanish printed on the wall adjacent to the gallery’s entrance. The display was a departure from the first public iteration of Rodriguez’s El Barrio project, which illustrated a story in the May 1990 issue of National Geographic called “Growing Up in East Harlem.”  This cover article by journalist Jere Van Dyk rehashes many excoticizing tropes common to ethnographic writing. Van Dyk leads with lurid encounters and grim poverty statistics that cast El Barrio as a place apart from the city and the nation: “To live in Spanish Harlem—the neighborhood, el barrio—you must watch yourself and everyone else, because you are in another world.”

The specters of surveillance and implied violence are critical components of his exposé. Accounts of drug deals and police stops precede the few glimmers of hope to be found in profiles of community activists and students. Van Dyk attempts to close the gap between the public perception of Spanish Harlem and the reality of its residents’ lives, but he continues to rely on a discourse that treats the inner-city drug economy, violent crime, and overall hopelessness as the result of personal failings rather than the outcome of residential segregation, inadequate job access, and racism. The piece remains an account by an outsider unable to overcome, or truly understand, the distance between himself and the people he portrays.1

It was refreshing therefore, to see these photographs stand on their own. Accompanied by the projectors, which invited visitors to click through Rodriguez’s slides, the photographs encouraged viewers to slow down, to sit with the person and place photographed, to work on how one sees in addition to considering what was on view. A silhouetted boy only a few feet taller than the saxophone in his hands practices his music while standing on a windowsill; two male lovers recline on a bed, their arms and hands crossed as a framed poster of Marilyn Monroe watches over them; a young black girl consumes a Firecracker ice-pop while leaning against a graffitied wall, her puppy’s face peeking out from the fold of a half-zipped parka (this photo appeared on the National Geographic cover); scores of Christian parishioners gather solemnly on a feast day, following an open casket containing a statue of Jesus Christ laid on a bed of fresh flowers. Everyday life unfolds in El Barrio.

Rodriguez shows himself to be a compassionate and astute chronicler of the quotidian experiences of the people he photographs. The spontaneous quality that suffuses many of his images belies a far more intricate and dedicated photographic process honed over the years he spent in El Barrio. As a working-class Puerto Rican with ties to the neighborhood—his uncle owned a candy store that doubled as a bolitero joint2  —Rodriguez worked intensely to gain the trust of those whom he would depict. Humility and persistence, not just his Leica fitted with 24mm or 35mm lenses, were his most critical tools for capturing the nuances of peoples’ lives. His photographs reflect the intimacies he fostered by attending church services with families, helping abuelas with their grocery shopping, drinking 75-cent Budweisers at neighborhood social clubs, visiting patients at area hospitals as the AIDS epidemic reached its harrowing peak, and even sitting in poorly lit stairwells while acquaintances sold drugs before returning to their families. In the early years of the project, before it was picked up and funded by National Geographic, Rodriguez was a student at the International Center of Photography and could afford only two rolls of Kodachrome 24 film for every two weeks of photographing. Thus, the moments when he lifted his camera were precious. The pictures are more than mere documentary evidence. They are markers markers of deep and abiding knowledge of a people; they create an epistemology of barrio life.

Among the technical and compositional strategies at play in his photographs, Rodriguez’s mastery of light stands out. Shadows and velvety black negative spaces have their place within the frame. Some figures remain underexposed or silhouetted: the abiding darkness of an unlit hallway shrouds a black woman and her three children; a man, his face obscured by shadows, leans into a woman’s neck as she addresses the camera with a nonplussed glance. In his interior scenes, Rodriguez does not bring in additional light or use flash, photographing the spaces and people as they are. Not everything is in perfect focus, and it does not have to be.3  A reluctance to impose a narrative on the people and places of El Barrio emerges as Rodriguez seems to eschew the expository dictates of documentary realism. He photographs against the disciplinary logic inherent in photography’s uses as a medium for objectifying and surveilling “criminal” and nonwhite bodies.4  Rodriguez, who was incarcerated and overcame addiction, respected the right of a community to keep aspects of its intimate life to itself, knowable only to those of and within that world.

The New York captured in these images is a far cry from the city that had been highly regarded for its liberal progressivism in the post-World War II era. The financial crisis of the 1970s put an end to the Great Society programs that brought minorities and the poor a measure of optimism. Politicians, city planners, and the local news media began to blame the city’s budget shortfalls on the costs of supporting a surplus population of ethnic minorities and migrants, the majority of whom were Puerto Rican and African American, while underplaying the imposition of austerity programs—sometimes called “planned shrinkage”—and the combination of a dwindling tax base caused by white flight along with deindustrialization and the loss of working-class jobs. Even as the city’s crisis metastasized as a result of racialized policies of redlining and social service allocation, which would swallow up and hollow out swaths of housing in the South Bronx and Harlem, officials began the process of rebranding the city and courting the corporate and financial institutions that would make New York the neoliberal financial capital it is today.5  As Puerto Rican photographers began picking up cameras in the mid-to-late 1970s to document and make sense of the violence affecting their neighborhoods,6  city officials were offering tax breaks and marketing office real estate in Manhattan’s financial and retail centers to attract a more flexible, mobile, and affluent urban clientele that could profit from the city’s working-class grittiness without living in those neighborhoods, El Barrio among them. With Joseph Rodriguez’s photographs as a critical component of the larger corpus of images produced by New York Puerto Rican photographers at this time, Puerto Ricans are no longer a footnote in that story.

As gentrification continues to run rampant across El Barrio, the South Bronx, and the city at large, as millions of Puerto Ricans remain without power and basic resources on an island devastated by a historic hurricane, as a new migration stirs and swells the ranks of a resilient diaspora, Rodriguez’s photographs confirm that we Puerto Ricans have indeed been here before, and maintain what is critical for our continued survival: hope.

3. Adal Maldonado explored the radical possibilities of being out of focus for the Puerto Rican diaspora in his series “Los Out of Focus Nuyoricans” (1995–96), available at elpuertoricanembassy.org.

5. Miriam Greenberg, Branding New York: How a City in Crisis Was Sold to the World, New York, Routledge, 2008.