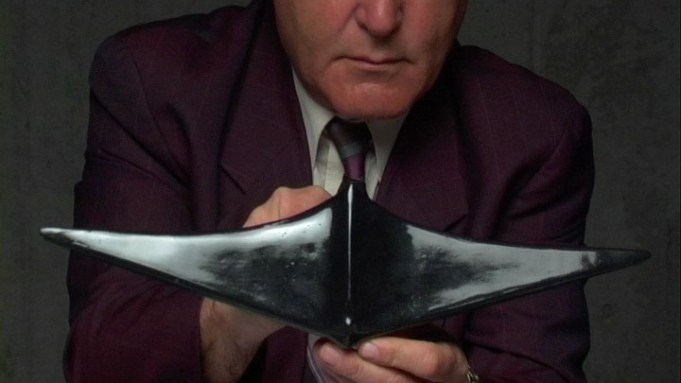 In the last decade, the once-small Istanbul art world has filled out with non-profits and independent artists’ initiatives. Commercial galleries have been slower to appear, but a series of exhibitions timed to coincide with the Biennial opening in mid-September signaled that whatever the economic circumstance, the Istanbul market is open. Most of the art on view is local, but there is a tug of war for Turkish artists and institutions: whether to fill market demands for artworks chock full of “cultural specificity,” or to argue for local work’s more “universal” appeal.

“Juggernaut” is Turkish artist Emre Hüner’s début solo exhibition at the locally prominent Rodeo Gallery. Black Ships Ate the Sky (2009), a series of foreboding gray pencil drawings depicting mysterious air-borne contraptions (dirigibles? spy drones?) against dark skies, feels like a preparatory study for the main attraction, the twenty-minute film Juggernaut (2009). Clips from a WWII-era Disney propaganda film and General Motors’ 1940 “To New Horizons” are interspersed with Hüner’s original footage. Carefully composed scenes inspired by still photographs of Soviet flying clubs from the Cold War era, or vintage NASA images of rocket scientists scrutinizing miniature models of various air- and space-craft, purposefully elude a strict narrative structure. A bulky gray cement sculpture, itself reminiscent of some overblown model, nearly blocks the entrance to the gallery of drawings. Its insistently unidentifiable form is all the more uncanny because it is eerily familiar from the drawings and video: one of the scientists’ models “come to life,” perhaps, to dwarf us as other contraptions dwarf the occupants of Hüner’s drawings. Hüner’s work plots out, and plays within, the half-imaginary side of utopian projects, ultimately asking us to consider the forms, the temporal context, and the menace, of modernization. (LEFT: EMRE HUENER, JUGGERNAUT, VIDEO STILL, 2009. COURTESY THE ARTIST AND RODEO)

Organized by London-based art consultant Suzanne Egeran in preparation for the opening of her Istanbul office, “In the Between” relies on a clean art historical premise—an almost phenomenological inquiry into the space “between” viewer and artwork, or artworks which fall “between” categories— to demonstrate three Turkish artists’ natural integration into an international spread. The exhibition also features eleven artists, including Martin Creed, Cerith Wyn Evans, Peter Coffin, and a trio of well-established locals, Ahmet ÖÄ?üt, Hüseyin Alptekin, and Ali Kazma. ÖÄ?üt’s video Things We Count (2008) is a tracking shot of dawn breaking over hundreds of U.S. Air Force planes stored in the Arizona desert. ÖÄ?üt’s voice counts slowly upwards, changing from English to Turkish, to Kurdish. The most pressing “betweenness” here seems to be the dramatically different political relations “between” a speaker of English, Turkish, or Kurdish to this display of dormant military might. Alptekin’s series of signs from impoverished hotels in Turkey and the Balkans (Hotel Odessa, Otel Kazablanka) similarly map an economic zone “in between” existing structures of local commerce and expanding global franchises like hotel chains. ÖÄ?üt and Alptekin’s works include specific cultural references, highlighted by their appearance in Istanbul, which push the question of “betweenness” beyond the territory initially outlined by the exhibition.

“Unsound Reason / Adequate Cause,” Galeri NON’s inaugural exhibition, showcases seven local artists from a younger, up-and-coming generation than those seen in Rodeo and “In the Between.” AslÄ± ÇavuÅ?oÄ?lu’s video If something bad happens it happens to me (2009) is a stand-out, featuring television shows that showcase painful accidents as comedic achievements—series like “America’s Funniest Home Videos,” which are practically a genre of their own in Turkey. ÇavuÅ?oÄ?lu herself stars in a set of blurry, unfortunate accidents: falling out of a hammock; riding a bicycle into a pond. Heaping misfortune on herself, ÇavuÅ?oÄ?lu highlights the role of repetition within the genre, forcing us to question just what sort of pleasure we take from watching low-level pain and humiliation over and over and over again. ÇavuÅ?oÄ?lu’s work might be seen to fit with some of the exhibition’s stated interests. which include “judgment skills,” “the processes of adulthood,” and “different historical ages.” But it’s anyone’s guess how the other six works, among them Gökçen Cabadan’s portrait of a young boy (a luminous oil study which also eerily lays bare its subject’s esophagus), and GüneÅ? Terkol’s figural “canvas” made of sewn fabric, relate to these themes, or each other. (LEFT: TAYFUN SERTTAS, I LOVE YOU, 2009)