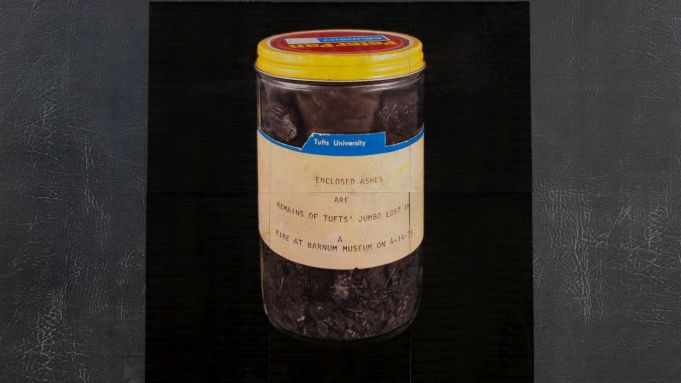 The first-ever televised image was Felix the Cat, an animated, anthropomorphized black feline who walks on two legs and talks. Talking animals have dominated animation ever since, from Mickey Mouse to Nemo and Dory: humans project their narratives and emotions on other species. Critical of this anthropocentric convention, British artist Ollie Dook makes CGI videos of talking animals that tell stories from the perspective of creatures in captivity.

In the four-minute Reflections on a Visit (two versions, both 2017), Dook samples audio from The Zoo in Winter (1969), a BBC TV segment in which actor-director Jonathan Miller offers sharp commentary during a visit to the London Zoo. Miller suggests that humans maintain zoos in order to feel a sense of superiority to other animals. Comparing zoos to prisons, he also contends that, “Of all the species, [humans] are the only ones who systematically persecute and torment each other.” Dook revisited the same zoo half a century later, only to find that little had changed. In one version, an animated monkey is superimposed over the footage Dook shot at the zoo, reciting a version of Miller’s monologue.

Last year, Dook’s solo exhibition at Humber Street Gallery in Hull, UK, centered around Jumbo: a Sudanese elephant who was born in 1860, then sold to various European zoos and, eventually, to Barnum & Bailey’s Circus in the United States. In the gallery, Dook projected a CGI video on a freestanding wall built to Jumbo’s height—just over 13 feet. Panels covered in faux elephant-skin were propped up against the surrounding walls, recreating Jumbo’s surface area: 420 square feet. The gesture reflects the obsession Jumbo’s fans had with his size: his name later became synonymous with the word “huge.”

In the 13-minute video, whose verticality conveys a sense of strict confinement, we see Jumbo grinding his tusks against the wall of his tight sleeping quarters: a symptom of zoochosis, or the psychological effects of being held in captivity. In a voice-over, Jumbo laments his “unsettled life;” on-screen, he slogs a bottle of wine—one of his keepers is said to have given him alcohol to soothe him when he was distressed. After he died in a mysterious train accident, Jumbo was taxidermied and displayed in the circus’s museum—a fate especially cruel for a species that covers their dead—until the museum burned down. Dook heat-transferred an image showing Jumbo’s ashes—which are kept in a jar at Tufts University, where Jumbo is the mascot—onto the faux elephant skin. This and other reproductions of archival Jumbo ephemera remind audiences that though Dook uses CGI, which is often a tool for realizing fantastical narratives, the story he tells is real.

Dook, whose work is currently streaming on the digital art platform Daata Editions, often combines found or recorded footage with computer-generated imagery, sometimes challenging the distinction between the two. In actuality, CGI is rarely purely computer-generated: to create the texture of a road, for instance, one typically merges many photographs of asphalt. Further muddying the distinction between fabricated and recorded imagery, Dook—who holds a master’s from the Royal College of Art in London—has trained his “lens” on the moon. For The Moon Isn’t Real (2018), he sampled audio from present-day YouTube conspiracy theorists who doubt the moon’s existence: a more extreme version of the widespread skepticism about the 1969 moon landing. Many thought the event was staged and recorded in a studio: Stanley Kubrick’s 2001: A Space Odyssey had come out the year prior, and some saw his fictional footage as more convincing than the astronauts’. Off-screen, YouTubers wonder: if the moon is real, why can’t I photograph more than a blurry white dot? One voice insists that it’s melting, and another constructs an elaborate equation involving his zoom lens to conclude that it’s actually only 4.7 miles away—rather than the 238,900 that scientists would have us believe. On-screen, Dook shows archival footage—some of it animated—alongside YouTube clips, telescope images, and CGI, all rendered in a seductive black-and-white that makes it difficult to discern which of the moon images are “real.” The gesture highlights how two people can see one thing but come to totally different conclusions, and how images and belief systems inform one another. At the same time, the absurdity of the theories illustrates the dangers of post-truth extremism.