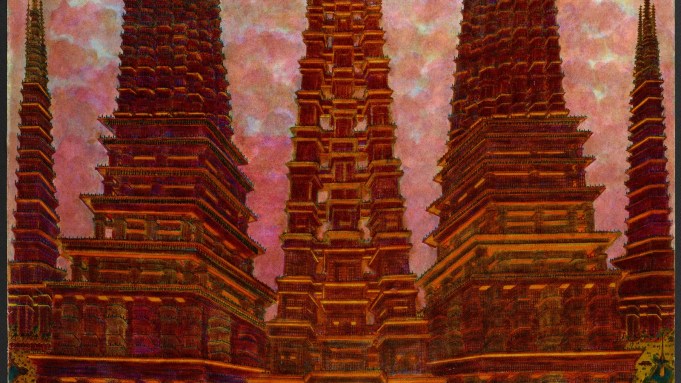 This year’s Outsider Art Fair is perhaps more “insidery” than ever before. There are mainstream galleries, like New York’s Marlborough Chelsea and Hirschl & Adler Modern, which deal in Outsider art as a sideline—and, for the first time, at least one exhibitor dealt with the insider-outsider issue head on.

Taking place on four floors of Center 548, the former Dia building in Manhattan’s Chelsea neighborhood (through May 11), this year’s fair was shifted a few months from winter by fair organizer and New York dealer Andrew Edlin to coincide with the Frieze New York fair. Forty-seven international dealers and galleries are participating this time, showing a wide range of works in all areas of the genre.

The controversial term “Outsider art” has evolved over the years to refer to just about any artwork produced outside the usual conduits of the contemporary art world by artists who have largely ignored the usual careerist strategies associated with mainstream art production. The art of the insane as well as that of self-taught artists are squeezed rather uncomfortably together under this umbrella term. This year’s Outsider Art Fair certainly contains a wildly diverse assortment of pieces that further thwart any attempt to define the term. But the problem shouldn’t impede the many pleasures to be had from exploring the high-octane works on offer.

A more purist variety of Outsider works is found at Galerie du Marché from Lausanne, Switzerland, which showcases 1930s works by European Art Brut artists, such as Madge Gil, Adolf Wölfli and André Robillard, many of whom were institutionalized for most of their adult lives. Hirschl & Adler features a solo show of small, intricate drawings from the 1930s by Edward Deeds. Slowly, details of the life of this enigmatic figure are starting to emerge. Until recently, he was referred to as the “Electric Pencil,” due to the electro-shock therapy he apparently was routinely forced to undergo for many years.

Almost nothing is known about the life of the Parisian artist Marcel Storr, whose dreamy architecture studies found after his death in 1976 are making their U.S. debut. A group of these fragile, light-sensitive works of fantastical structures, made of colored ink and graphite on varnished paper, are displayed in a darkened area of Edlin’s booth, behind black curtains.

Among the other outstanding displays is a selection of drawings by New Zealand artist Susan Te Kahurangi King at Chris Byrne + Marquand Books, Dallas. In a brief but feverish period of creative activity in the late 1950s and early 1960s, when she was a child, this artist filled notebooks and double-sided drawings with elaborate deconstructions of Disney’s Donald Duck cartoons; they constitute an astonishing and uncanny precursor to Pop art.