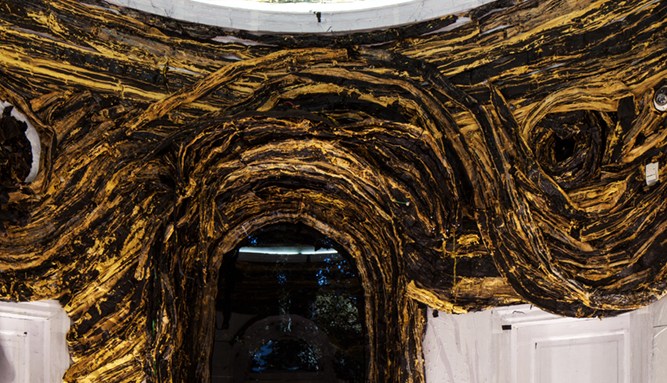 Visitors to Mark Bradford’s exhibition as the official United States representative to the 2017 Venice Biennale must enter the neoclassical US pavilion using a single side entrance, where they immediately encounter a massive, hulking obstacle suspended from the ceiling. Shunted to the periphery of the room, they are forced to navigate around this bulbous form that at first seems to resemble the underside of an enormous, misshapen bathtub whose surface has been coated in thickly textured layers of shredded colored paper. Black, red, and flaming orange predominate. The installation’s title, Spoiled Foot, suggests that we might be looking at the heel of a giant rotting foot that has stepped through the pavilion’s roof, and speaks to Bradford’s longstanding preoccupation with bodily surfaces and depths.

Spoiled Foot‘s oscillations in scale between intimately textured surface and room-encompassing mass exemplifies the formal properties of social abstraction, as Bradford terms his art. Bradford is concerned with the ways the body and the conditions of how we look and what we see are marked, shaped, and deformed by historical schemas. For the most part, he eschews figurative representation. His large-scale mixed-medium works transform prefabricated materials (most of his supplies come from Home Depot) into densely layered compositions whose surfaces are shredded, burnt, and slashed to form minutely textured, abstract constellations of color and texture. Spoiled Foot‘s mottled surface was created using Bradford’s characteristic technique of sandblasting collaged layers of paper. Fragments of printed text are legible in a few places and suggest that some of the paper may have been culled from the signage of an immigrants’ rights protest. Pockmarked with small dark circles that could be burn marks from a blowtorch and studded with orange plastic screw caps, Spoiled Foot is perhaps the most ambitious manifestation to date of Bradford’s interest in blurring the distinction between the industrially produced and the handmade. While the piece might evoke diseased skin––as have previous works in which Bradford used his sandblasting technique (for example, the series of mixed-medium canvases he created in 2015 in response to the AIDS epidemic)––the enormous scale allows the installation to function in multiple interpretive registers and representational frames.

Born in South Central Los Angeles in 1961 and raised in Santa Monica, Bradford worked as a hairstylist in his mother’s salon up through his studies at CalArts, which he entered at the age of thirty, and his work builds upon specific theoretical and aesthetic lineages of post-1960s Southern California art in order to find ways of giving visual form to black and queer modes of embodiment and historical experience. This aim is most palpable in the pavilion’s airier second gallery, which visitors enter after circumventing the claustrophobia-inducing Spoiled Foot. A trio of large paintings titled after mythological Sirens––Raidne (2017), Leucosia (2016), and Thelxiepeia (2016)––hang on the walls. Their surfaces display rows of index card-size rectangles that evoke strips of celluloid film or perhaps fish scales but are in fact the thin white endpapers that beauticians use when perming hair. Bradford has coated the papers in black dye and transparent paste and combined them to produce modulating fields of oceanic gray, navy, and violet. At the center of the same gallery stands the sculpture Medusa (2016): a tall pile of tangled tubes constructed from polyester rope that has been loosely wrapped in crumpled black construction paper. Slathered in translucent paste and streaked with bleach, the black paper has become marbled by rivulets of white and an almost sickly yellow.

In spite of the mythological references, the works in this room are unmistakably autobiographical. The endpapers that cover the surfaces of the Siren paintings mark Bradford’s return, after thirteen years, to a prefabricated commercial material that he first used in the breakthrough series of paintings he made while finishing his MFA, during which time he continued to work in his mother’s salon. As in the earlier series, the endpapers allude to the hair salon as a vital source of economic sustenance, sociality, and aesthetic pleasure for black women and queer men. Yet there are uneasy and even mournful undercurrents to these works: Bradford seems alert to the role of hair as both a crucial medium of black expressivity and self-fashioning and a charged site of racial fetishism, anxiety, and shame. Interweaving the personal with the mythological, Medusa also references the serpentine hair of its mythological namesake and her power to petrify the men who attempt to kill her to obtain the treasure she guards, while the sculpture’s height, a little taller than the average doorway, hints at a correspondence with the artist’s notably lanky frame (he is 6’7″).

Bradford used similar ruches of bleached black paper in the pavilion’s central rotunda, where he sculpted them into long crumpled ribbons that sweep dramatically across the room’s upper walls and encircle its central dome. Ornamenting architecture that was partly modeled on Thomas Jefferson’s Monticello plantation with a set of materials linked to black, queer, and feminized modes of bodily expression, Bradford again immerses viewers in a visual environment of oscillating scales and representational registers that are, by turns, threatening and playful. He was reportedly tinkering with the exhibition up through the opening weekend, and a sense of restless, open-ended urgency is especially palpable in this rotunda installation, where the lower walls are plastered with peeling sheets of white paper that suggest an incomplete or abandoned construction project. (Likewise, the pavilion’s exterior grounds seem to have been deliberately left as an unkempt work site, with piles of gravel and empty beer bottles littering the yard in front of the building’s columned facade.)

Beyond the rotunda, in the pavilion’s fourth room, are three large mixed-medium canvases, each created using the sandblasted-and-slashed layers of paper, glue, and industrial paint seen in Spoiled Foot. Significantly for the US pavilion, the color palette of all three canvases is dominated by red, blue, and a conspicuously fleshy beige-white. Tomorrow Is Another Day (2016), titled after the final line of Gone With the Wind, has a surface particularly redolent of tumorous cells or scar tissue. Go Tell It on the Mountain (2016) is dominated by a beige domelike shape set against a sky-blue background, its lower right quadrant bisected by a rectangular band of mottled black and red. These works display the traces of their making; named for key references from the archive of US racial representation, they might be understood as a haptic response to what philosopher Frantz Fanon called “epidermalization”––the process by which variations of skin pigmentation have been visually coded by historical schemas that in turn come to structure the phenomenological dimensions of racial embodiment.

Partly for reasons of timing, Bradford’s US pavilion may prove to be a contentious juncture to ongoing discussions about the politics and ethics of abstraction (in its many senses) in black aesthetics––a question that has lately attracted renewed critical attention in a historical moment marked by both mass protest and mass surveillance. The costs and benefits of visibility seem more uncertain and destabilized than ever. In the context of a Biennale that on the whole feels anxious and unresolved about the place of social participation in art and politics today, some might find Bradford’s approach to “social abstraction” to be overly evasive or too formally hermetic––especially in light of the intensifying sense of crisis that separates us from the pre-November 2016 world in which much of the work included in the exhibition was conceived.

Yet Bradford has long sought to get at sweeping political and historical themes by way of the particulars of the everyday. In the last few years he has increasingly turned his attention to social practice and community activism, largely through Art + Practice, a cultural foundation that offers services to youth in the foster-care system in South Los Angeles. In connection with his role at the Biennale, Bradford has initiated a six-year collaboration with Rio Terà dei Pensieri, a Venice-based social cooperative for former prisoners. For the duration of the exhibition, the group is running a canal-side pop-up in the San Polo neighborhood selling handbags, essential oils, and other products made by the organization’s members.

Bradford has always insisted on maintaining a clear distinction between his art and his community-based work. But he opens a pathway to the social in the final work on display in his Venice presentation: the three-minute video Niagara (2005), which offers the only non-abstracted depiction of a human figure in the pavilion. Projected on a large wall at the center of the fifth gallery, the video is modeled on a well-known extended static shot from the 1953 Hollywood thriller of the same title that fixates on Marilyn Monroe’s backside as she walks away from the camera. Bradford’s version features a black male figure––a sixteen-year-old neighbor who complained to the artist of being harassed by classmates about his gait, which they perceived to be overly flamboyant. Bradford frames him from behind, walking up a gently inclined Los Angeles street, dressed in a pair of golden shorts and a white tank top. The use of slow motion heightens the exuberant coordination of his limbs and the jostle of his flesh as each step lands on the pavement.

Midway through Niagara, its adolescent protagonist encounters a mound of debris strewn across the sidewalk. Neglecting––or refusin––to break his stride, he instead makes a small leap to the other side, landing on one foot and swinging his arms triumphantly before continuing. The video transforms this seemingly minor, quotidian movement into something balletic and luxurious. It is a moment that, like much of Bradford’s work, conjures the coercive mimeticism that places restrictive representational demands upon racially and sexually minoritized artists; it is suffused with the sort of insolent joy that comes from discovering ways of inhabiting a body on one’s own terms. Niagara‘s heart-quickening leap is an apt closing gesture for a show that is pervaded by Bradford’s searching, defiant commitment to forging new possibilities for minoritarian sociality and aesthetic pleasure from the detritus of history––or at least what’s on hand.