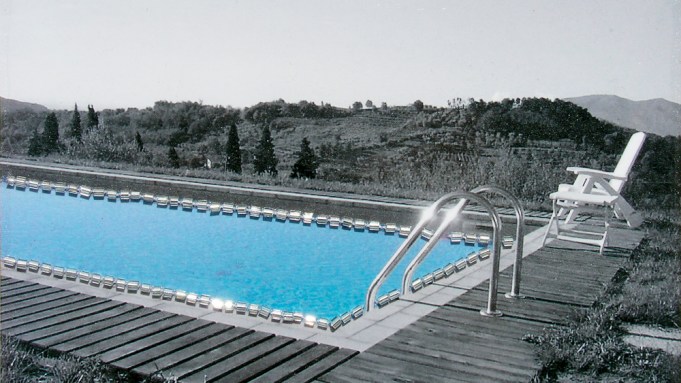 In the last few years, Estonia’s Jaanus Samma (b. 1982) has emerged as one of the most widely recognized artists of Baltic Europe, primarily for his queer themes and interventionist methods rather than any particular medium or style. Indeed, Samma belongs to a new wave of younger artists for whom research across an array of topics and mediums takes precedence over any one means of expression. Samma’s guiding force is his curiosity. Each project he pursues takes the form of an investigation, not only into the subject at hand (of late, Estonia’s gay subculture during the Soviet era) but into the very nature of making and exhibiting art.

I first met Samma in Naples in the fall of 2014 through Eugenio Viola, curator of the city’s Museo d’Arte Contemporanea Donnaregina. The artist and I both happened to be passing through at the same time, myself on a casual trip through southern Europe, Samma to confer with Viola, who is overseeing his new project for the 56th Venice Biennale, where the artist will represent Estonia (pop. 1.3 million).

I was sufficiently intrigued by this impromptu meeting to visit Samma in his hometown, Tallinn, in November, not long after the opening of his solo exhibition “The Hair Sucks Sweater Shop” at the Tallinn Art Hall Gallery, which he transformed into a pop-up boutique selling hand-knit sweaters emblazoned with pornographic imagery and obscene words in various European languages, based on bathroom graffiti he has recorded on his travels throughout the continent.

Except for a brief stint studying in Paris and attending various international art residencies, Samma, the son of two academics, has lived in Tallinn his entire life. He completed his undergraduate and master’s degrees at the Estonian Academy of Arts, where he currently works as a lecturer while completing his PhD. In 2013, he won the country’s most prestigious contemporary art award, the Köler Prize from the Contemporary Art Museum Estonia, in both categories: the Grand Prix and the People’s Choice Award. Now that he is inarguably one of Estonia’s best-known artists, his multi-medium Venice project, “Not Suitable for Work: A Chairman’s Tale,” will address his largest international audience to date.

Samma’s studio is located in the historic city center, in a building shared mainly with jewelry craftsmen. The structure is situated directly across the street from the Russian (formerly Soviet) embassy—a source of black amusement for Samma, as Estonia was always one of the more restive USSR satellites, and tensions between the two cultures endure to this day (Estonia still has a significant Russian minority). Our conversation began in his studio over a weekend, developed as we proceeded through the streets and cafés, and continued online during the following month.

TRAVIS JEPPESEN  You say that you haven’t been using your studio very much of late. Nonetheless, you’re very busy with making and exhibiting art. Does this mean that you have “left the studio behind” in favor of other methods?

JAANUS SAMMA  Maybe I have given up studio-based art practice in the classic sense. I don’t paint in my studio, for example. And it is true that lately most of my work is done in collaboration with various craftsmen and professionals, so my job has been mainly to organize the process. This is especially the case with my last exhibition, “The Hair Sucks Sweater Shop,” where I had lots of handmade sweaters, knitted by 16 people. But my working process can also be very different from this, since I don’t have any one-and-only medium I concentrate on. I like to be versatile, to try out new techniques. But I enjoy making things with my own hands as well. Since I started my art studies in traditional printmaking, I feel very comfortable working without my laptop. At the moment, I’m learning to make jewelry and thinking of ways to apply this skill in a contemporary art context. I use my studio mostly as an office and storage space—but also just as a place to be alone and think. So even if I’m not coming here very often, I feel safe just to know I have it.

JEPPESEN  Can you describe the process of collecting tags for the “Hair Sucks” project?

SAMMA  I collected graffiti and random scratchings connected to the topic of sexuality and queerness from all the places in Europe I’ve visited over the last few years, reflecting my own subjective experience of urban space. Then I transformed them into patterns for hand-knit sweaters. I wanted to apply those often offensive texts and images to a medium that is warm and intimate. I also liked the idea that the knitters I hired to carry out the project spent hours and days working on something that somebody had drawn on the wall of a bathroom stall. And finally, when the sweaters are worn, something that was drawn anonymously now becomes very personal.

SAMMA  Yes, I chose swimming pools because I find them sexy! I made the series for my first solo show [at EKA Gallery, Tallinn]. I found the photos on the Web and decorated the images with beads. I didn’t verbalize or analyze much what I was doing and why. I was just so excited about the technique and the glittery kitsch-camp outcome. In my next series, I continued with abandoned municipal pools, mostly as a study of an urban space. Later, I was invited to work in Pärnu, a town on the west coast of Estonia, where I mapped fountains and counted the wish-making money that people had dropped in each one.

JEPPESEN  It’s funny because I thought most of your work dealing with urban space was more interventional in nature, almost anarchic. I’m thinking here in particular of the public project where you planted nettles, a weed that grows very fast and is essentially uncontrollable.

SAMMA  The garden installation was certainly more interventional. I made a small garden with paths—a parterre—inspired by the Baroque gardening tradition. But instead of flowers, I planted nettles in geometrical patterns. The idea was to use a weed to create a contrast between the rationalistic order and the chaos of nature. I did the installation in Luleå, a small town in northern Sweden, and the reaction of the local people was quite funny. They found the work very dangerous for children and wanted to build a fence around it. So it’s pretty easy to be anarchic in Sweden.

JEPPESEN  Nowadays, collaboration seems to be at the core of your artistic method. “Hair Sucks” was done in concert with textile artists, and for the upcoming “Chairman” installation in Venice you’re working with a filmmaker. Do you see yourself as an “ideas man,” or art director, rather than a craftsman who makes things? Has such a model for the artist become obsolete?

SAMMA  After I finished my studies in printmaking, I soon realized that I had to choose whether to continue with this particular field of art or to leave it behind. It is not possible to be good at any technique if you don’t practice it regularly. Another “problem” I had was that I was fascinated by a multitude of other skills (photography, textile-making, goldsmithing, etc.), so it became obvious that I couldn’t do everything myself.

In addition to working with craftsmen, sometimes I like to commission works from fellow visual artists in order to get a new perspective on the topic at hand. Of course, at the same time, it is very difficult because then I have to give part of the decision-making process away. But in the end, I love collaborating. I get lots of new ideas just by talking about my project with people from different professions.

JEPPESEN  Now let’s turn to your project for Venice. Who was the “Chairman,” and how did you find out about him?

SAMMA  In 2011 I started research on gay history in Estonia during the Soviet period. I did many interviews with elderly gay men, and in Tartu [in the south of Estonia, the country’s second largest city], I heard a lot about a guy called the Chairman. He got his nickname from being the head of several collective farms, or kolkhozy, from the 1950s until the mid-1960s. Despite his exemplary credentials as a war hero and a family man, his career ended abruptly with a prison sentence for homosexual acts. After serving his sentence of one and a half years of hard labor, the Chairman moved from the countryside to Tartu, but was able to get only blue-collar jobs. He became quite notorious for his active social and sex life and was eventually murdered in his home in 1990 by a Russian soldier who hustled on the side for extra cash.

The Chairman’s life story evokes a broad spectrum of issues that open up what it meant to be homosexual at that particular time, in that particular social and political context. I was so intrigued that I went to the national archives to see if I could find out more about him. To my surprise, there was quite a large amount of material. Most interesting, of course, was the court file in which he was sentenced to hard labor for homosexual acts in 1966. According to paragraph 118 of the criminal code of Soviet Estonia, it was illegal for men to have anal intercourse with each other.

I knew the law before, but what I did not know was how these cases were handled. To prove the illegal acts, the police had to provoke men to inform on each other. Without explicit accusations, they had no way to prosecute anyone. Fear and insecurity, along with the hope of a lighter sentence, drove these men to point a finger. At times, the testimony borders on the absurd. For instance, one witness claimed that the Chairman “forced” him to have sex several times, yet, for some reason, he continued to return to the Chairman’s house day after day!

In my Venice project, I’ll convert this story into a fragmented stage piece that mixes archival material with videos and installations. I want to tell the Chairman’s dramatic story, emphasizing the effects of the system on the individual, while at the same time leaving the moral implications open for interpretation.

SAMMA  Both of them center on the same narrative, but the Chairman’s story was such a rich discovery that I felt it deserved to be developed into a full-size exhibition. In Venice I will show, with one exception, only new pieces. The most important addition will be the archival documents from the Chairman’s court case. This material will make the story easier to follow, underlining the reason why I chose to work with these issues in the first place.

For me, it’s a question of creating a genealogy that I can identify with, while at the same time addressing how ready society is now to accommodate differences. In Estonia, there have been fierce debates over gay rights, but a real step forward was made last October, when parliament passed a gender-neutral civil partnership act—the only one currently in effect in the former Soviet Union.

OPENING SOON “Not Suitable for Work: A Chairman’s Tale,” at the Estonian pavilion, Venice Biennale, May 9-Nov. 22.

TRAVIS JEPPESEN is a writer and artist who lives in Berlin.