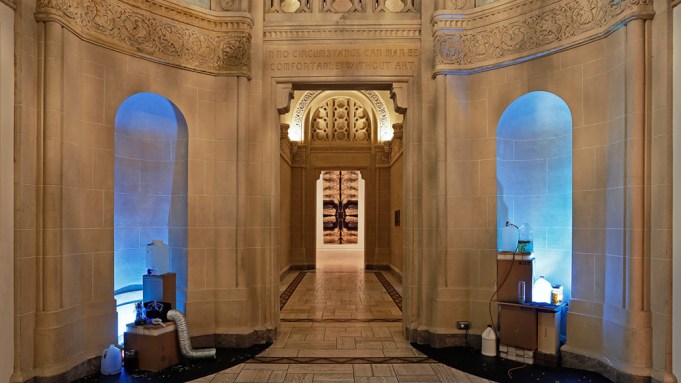 “It was a spooky bay, way back,” a fisherman named Gerry from Falmouth, Jamaica, says in a video in Susanne M. Winterling’s multimedia installation Glistening Troubles (2017). The work is a part of “Between Bodies,” curated by Nina Bozicnik, on view at Henry Art Gallery in Seattle through April 28. On other monitors throughout the room, computer-generated animations of organisms swirl with the cascading motion of screen savers. These blithe dancers are the source of the bay’s spookiness. These microscopic dinoflagellate algae emit light upon contact, creating a spectacle that inspired the Falmouth lagoon’s moniker Glistening Waters. Locals are familiar with the science of bioluminescence, but maintain their older lore: the lagoon is preternatural, the source of voodoo, white and black magic. Gerry shares stories of those who believe that the water portends the future and cures their ailments, who swear that the glow penetrated their skin. Foreigners are less unsettled, and online photos of Glistening Waters show tourists splashing in them to agitate the dinoflagellates for their lucent reactions. Glistening Troubles inverts the power relation between humans and dinoflagellates: mirrored columns between monitors reflect visitors to themselves, embedding them among the aggrandized, whirling creatures.

“Poetry is the human language that can try to say what a tree or a rock or a river is, that is, to speak humanly for it,” said the late writer Ursula K. Le Guin at a 2014 conference at the University of California, Santa Cruz. “Science describes accurately from outside. Poetry describes accurately from inside.” This spirit of “subjectifying” the natural world reverberates throughout “Between Bodies.” In Carolina Caycedo’s “Water Portraits” (2015–18), large dye-sublimation canvas prints of bodies of water across Latin America hang and drape in various ways, with pleats and twists that impress distinct personalities on each print. Ceiling-level canvas hangings command a deferential gaze upward. Caycedo’s label text encourages viewers to “[see] these water bodies as agential subjects rather than resources to exploit and dominate.” Whereas Winterling’s piece compares epistemologies of natural phenomena (exploring the difference between “pyrodinium dinoflagellates” and “magic bay”), Caycedo’s unfixes humans from the center of these systems altogether.

There’s a prevailing whimsy throughout, as in Caitlin Berrigan’s interactive installation Bilateral Seismic Communication Instrument (2016), where visitors can lean back into a neon-lit triangular cut of wood to feel the vibrations of seismic data from a volcano translated into sound waves. Candice Lin and Patrick Staff’s Hormonal Fog (2016–18) is a punk-hacker’s contraption of rewired fog machines and scent diffusers that emit a vapor of licorice root, hops, black cohosh root, and dong quai root. According to wall text, the herbs are “botanical antiandrogens, a class of pharmaceuticals that suppress androgens like testosterone from mediating their biological effects in the body,” playfully suggesting a natural masculinity repellent and a way to circumvent the drug industry.

From work to work, the show’s tone shifts from light-hearted to grave. Some pieces hold both affects at once. In micha cárdenas and Abraham Avnisan’s Sin Sol, Forest Memory (2018), a forest captured in 3D laser scans is projection-mapped onto the wall. Peering into the hanging iPads using custom augmented reality software, you can read somber poetry: “Today there was no forest there was only smoke / Bright gray orange haze for sky,” lines recalling California’s frequent forest fires. Other segments speak to the cognitive dissonance of performing mundane tasks amid anxieties around species extinction and climate change: “Every day I upload my backups to the server / Occasionally I email copies of new writing to friends / I do this out of a sense of desperation / That I might die / That we all might die.” As AR and VR programs often unquestioningly celebrate technological prowess at all costs, Sin Sol, Forest Memory feels refreshing in its solemnity.

The fantastic elements in “Between Bodies” at times teeter toward an overly anthropomorphizing sentimentality. This happens in Berrigan’s Field Notes, Mt. Saint Helens (2018), a set of texts accompanying an interactive installation, where the artist’s fictitious observations are distractingly hard to parse: “I would have wanted the plane to tip and let gravity take me in. But my mother has never transformed the aftershocks of violence against her into self-annihilation.” From what perspective is Berrigan writing? Despite the occasional schmaltzy moments, the exhibition conveys a firm ethical stance: interspecies cooperation isn’t a sweet theme, but an obligation to be taken seriously. In her aforementioned conference talk, Le Guin added that “science explicates, poetry implicates.” “Between Bodies” contends with this implication—the influence of our existence on other human and nonhuman entities, as codependent entanglement or as catastrophic consequence.