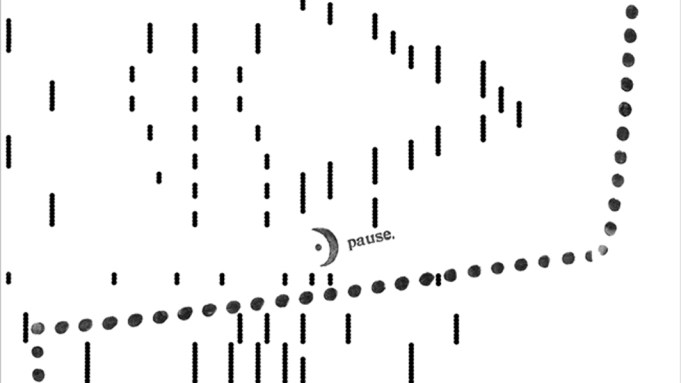 Fresh off the train from Philadelphia, braving blustery winds and wet, sideways snow, Anthony Elms met A.i.A. in the lobby of the former Dia building in Chelsea for a walkthrough of the Independent art fair. Now in its fourth year, Independent distinguishes itself from the other March fairs with its relatively small roster (40-odd galleries and nonprofits compared with the Armory Show’s 200+), a freewheeling, experimental spirit, and an open, cubicle-free layout, this year thanks to architect Christian Wassmann.

Last fall Elms, an associate curator at the ICA in Philadelphia since December 2011, was appointed one of three curators of the forthcoming Whitney Biennial, the museum’s last in its historic Breuer building uptown (the Whitney will move into a new building at the base of the High Line in 2015).

Elms started on the fourth floor and worked his way down. He was drawn to a print by Jordan Wolfson at Glasgow International, one of the four nonprofits showing at Independent. (GI, along with Printed Matter, White Columns and the Kitchen, collectively won the fair’s inaugural Privatus Prize; they will split the $10,000 award.) The symbols in Wolfson’s print reminded Elms of his recent film, Raspberry Poser, which debuted at RedCat in Los Angeles earlier this year. “He’s just a really good editor, which you can see in his films and his other work,” said Elms.

New York gallery Gavin Brown’s enterprise offers arguably the fair’s most eye-catching booth, with Thomas Bayrle’s wallpaper printed with a male-female couple throwing off articles of pink, blue and green clothing (pants, dresses, socks, high heels, etc.). Elms was interested in Kerstin Brätsch’s colorful glass panel set into an oversize wood display case placed on the floor; the roughly constructed lightbox doubled as a truncated wall for the gallery’s booth. “I have a soft spot for people who insert themselves into the industrial process,” Elms commented, circling Brätsch’s sculpture. “It’s tricky to make work that involves its own display intelligently.”

Over at Galerija Gregor Podnar (Berlin and Ljubljana), Elms looked down fondly at a gathering of delicately placed B. Wurtz floor sculptures composed of plastic bags, twigs and other detritus. “He’s like an urban Richard Tuttle,” observed Elms. “It should be trash-y, but it never even gets near that.”

Elms spent the most time studying the work at Cologne’s Galerie Susanne Zander. On the wall was a speaker emitting old EVP recordings (electronic voice phenomena). “I love geeking out over electronic recordings of ghosts,” said Elms. “I’ve never done a project about this, but I know I will eventually.” Elsewhere in the booth, Elms was pleasantly surprised to see photography from the 1930s. A series of tiny photos by Thomas Glendenning Hamilton, a Canadian doctor/spiritualist who photographed the séances he hosted in his living room, were particularly intriguing. “It’s exciting to see the innocence of early photography,” Elms remarked, referring to a time when ghosts or spirits revealing themselves in developed film didn’t seem all that far-fetched.

At Galerie Christian Nagel (Berlin and Cologne), Elms ran into an old friend in the work of Joelle Tuerlinckx, a Brussels-based artist Elms met when he was a preparator at the Renaissance Society in Chicago in the late ‘90s and she had a show there. Elms remembers the strong geometry, imperfect grids and recurring disk shapes in her work then, motifs that remain in the geometry of the large, gray prints of dish towels or cloth napkins installed in vitrines placed along the ledge under a wall of windows. “I remember her recording the staff, and using the transcript to make books. Her work is very archival, and she’s always working out a system. It’s never about being understood,” he said.

At Antwerp’s Office Baroque, Elms was mesmerized by Michel Auder’s 2011 video Endless Column, one of the artist’s more streamlined productions at only 10½ minutes. “He literally lives his life with his camera,” Elms explained. “He was one of the first people to take a digipak with him everywhere he went, recording boring stuff, dramatic moments, the ups and downs of relationships—it’s all there.”

Along with artists’ books, which Elms has been collecting for years (his personal stash numbers nearly 1,000), he also has a long-running interest in music. So he was especially keen on Erica Baum’s digital C-prints of the dot/dash arrangements found on player piano scrolls at Bureau (New York). Some of the prints had bits of text included, found poetry pulled from that particular song’s lyrics.

Overall, Elms was pleased with what he saw. “I’m always looking for excuses to be confused,” he commented, wandering amid the open-plan booths. “It’s nice to see art a little more casually, to see if it stops you in your tracks or not.”

Independent is on view through 5pm Sunday, Mar. 10.

This Ultra-Rare Ruf RGT Is Up for Auction, and It’s Already Reached Six Figures