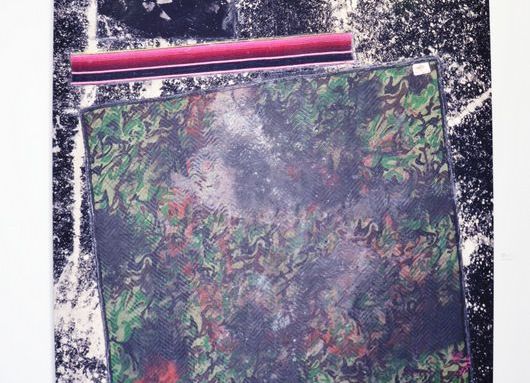 Dozens of people were waiting outside at noon, when the doors opened for the preview of the third Independent art fair at the old Dia:Chelsea building on West 22nd Street. A.i.A. visited the fair with Richard Flood, director of special projects and curator at large at New York’s New Museum and one of the organizers of last year’s Festival of Ideas for the New City. As we waited, he said, “This fair has been very fresh in past years.”

We started on the roof, where Bidoun, Mousse and others had publications on display. At Mousse‘s desk, a copy of A proposito di Marisa Merz caught Flood’s eye. “She is just one of the most amazing artists working,” Flood proclaimed.

“Her outfit never changes,” Flood went on. “It’s like, black, black, black, black.” Turning from her wardrobe to her self-actualized quality, he concluded, “She’s become a complete person. There’s no gaps.”

Onward and downward to the fourth floor, where Flood was immediately struck with the fair’s boundary-less layout, with no demarcation between the various exhibitors. “It’s a kind of easy treatment of space,” he said. “They really know how to install.”

At International Art Objects Galleries, he immediately picked out a sculpture, with hundreds of hanging shards of mirrored glass, by Pae White. “She’s a wonderful West Coast artist who has never had significant recognition in New York. She really has an ability to distill elements of pop culture.”

At Stuart Shave’s booth, Flood was taken with installations, paintings and sculptures by young Colombian artist Oscar Murillo, and spoke with the gallery’s Kirk McInroy. “Up until recently,” McInroy explained, “Murillo was working as a janitor in a yoga studio. He would get up at 4:30 in the morning and clean.” He pointed out sculptural elements that resembled tights, and a canvas, reminiscent of the work of Joe Bradley, inscribed with the word “yoga.”

Shave pointed out, “When Murillo turns on his iPhone, the picture for the wallpaper is his cleaning cart.” Asked how the Independent was treating him so far, Shave observed, “It’s only been open for 10 minutes and”—his eyes widened—”it’s already a very good fair.”

London’s Hotel gallery was showing a “self-adhesive on aluminum” image by Anders Clausen and paintings of computer icons by Alistair Frost, displayed along with massage tables. Looking around at the atmosphere, the gallery’s mustachioed Darren Flook observed, “It’s like a really great apartment in here, with lots of art on the walls.”

Flood lingered at Labor, a Mexico City gallery, and talked with director Pamela Echeverría. Among other works, Labor was showing Surplus Reality, a 2008 suite of prints created by Pedro Reyes in collaboration with the revolutionary group Movimento Dos Trabalhadores Rurais Sem Terra, or Landless Workers’ Movement (MST). According to Echeverría, they form a “fotonovela,” a sort of graphic novel. “It was a project for the 8th Mercosul Biennial,” Echeverría explained, but went on to say that the work was censored because of its political content, which deals with an unauthorized killing by the Brazillian army. The work displays, side by side in red and black, the original texts and the published, censored version.

“Reyes is the gift that keeps on giving,” Flood said. “He is so motivated and has such clarity of thought.”

“And no one knows about this,” Echeverría went on, “but he also works with high school students.

Flood was impressed. “There’s a lot bubbling up in terms of grassroots education. Not that Rick Santorum would admit that.”

We soon moved on to Sprueth Magers, where we chatted with Philomene Magers about the Thea Djordjadze works on view, especially a large, powder-blue carpet that hung like a green-screen background from the ceiling and draped onto the floor. But it was a large wall-hung work by Sterling Ruby, with paint and collage on what looked like a moving blanket, that really caught Flood’s eye.

“I find it difficult to talk about Ruby because I have so few reservations about his work,” he said. “He keeps shifting his position, maintaining the liberty to change the game with everything he does. It’s a new vision. He’s not lingering in the same attic as a lot of people.”

At the booth of Glasgow gallery the Modern Institute, Flood chatted with proprietor Toby Webster about, among other things, an upcoming show at the Institute centered on Paul Thek’s notebooks. “There are more ideas in the notebooks than in the whole recent Whitney Museum show,” Webster said. The show opens Apr. 20.

While visiting the Modern Institute, Flood looked long and hard at Luke Fowler’s photographs, each of which is divided in two; half the lens is covered during one exposure, and then the other half is covered, so they are time-based double exposures. They relate to Fowler’s film All Divided Selves, which is screening tomorrow at the SVA Theatre.

After a couple of hours of art viewing along with extensive networking with the likes of Albright-Knox Art Gallery director Louis Grachos (“Bring me up there any time!”), New Yorker art critic Peter Schjeldahl (“When is Cal’s next piece coming out?”), and Storefront for Art and Architecture director Eva Franch i Gilabert (“Are your heels high? Oh! They’re so high!”), Flood sighed happily, impressed with the Independent. Before teaching a class at NYU later that afternoon, he said, “I’m going to stop by home and scramble an egg.”