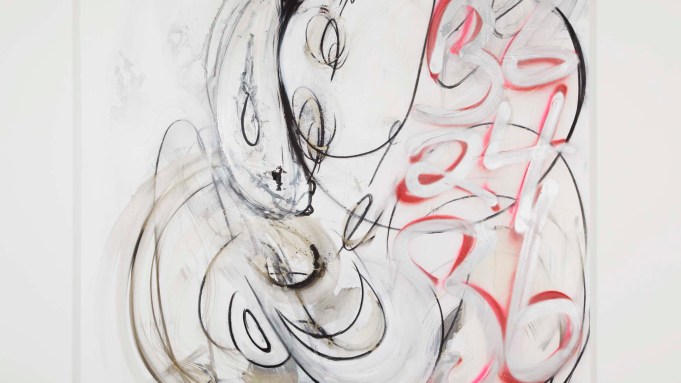 Michelle Grabner—artist, professor, long-time Chicagoan and, most notably these days, one of three curators of the current Whitney Biennial—has a philosophical take on the burgeoning art fair circuit. “I recognize art fairs as an absolute reality, but I don’t feel the need to participate as an artist. I understand their role economically, but am much more interested in the social interactions they provide,” she explained, while chatting on the ferry from the east side of Manhattan to Randall’s Island, where the Frieze Art Fair’s 250,000-square-foot tent is installed for the third year in a row. This year’s fair (May 9-12) features 190 galleries from over two dozen countries.

Before debarking the ferry, Grabner, soft-spoken and thoughtful, pointed out New Yorker art critic Peter Schjeldahl. “While waiting for you, I got to thank him for his write-up of my floor of the Biennial,” she told me. “Before now I had no reason to break into his private space.”

Surveying the chaotic scene inside, Grabner remarked that a recurring criticism of her floor of the Biennial is that it has an “art fair aesthetic,” meaning that there’s too much work by too many different artists crowded into one space. “I like to think about how to co-opt the structure and the display strategy of the art fair, and how it relates to the luxury of institutional space,” she said.

Once inside, Grabner and I forged ahead down the fair’s central aisle. About halfway down, she pulled up in front of an untitled 2005 Heimo Zobernig sculpture made of three projection screens installed outside Paris dealer Chantal Crousel’s booth. “The screens receive nothing—it’s both a little pathetic and exquisite in image retrieval,” she observed. “He had a show at the Renaissance Society [in Chicago in 1996] that was very influential in how I think about formal ideas.”

Gagosian’s booth stood out for its size, its surprisingly spare installation of new linen paintings by Ed Ruscha and its white floor. “These are just beautiful,” Grabner sighed, looking at the Ruschas. “The linen surface is incredible. An artist friend said this was his favorite installation, but I was suspicious! The white stage floor is meant to draw people in, and it works.”

Reaching the south end of the meandering tent, Grabner spotted London dealer Kate MacGarry’s booth. “Let’s have a B. Wurtz moment,” she suggested, noticing the artist’s delicate sculptures, made up of found detritus like colorful plastic bags, bits of string and wood. “B. always brings the loveliness of the everyday, and it’s never not that,” she said. Grabner was puzzled by a small sculpture made of unidentifiable plastic material. “This is compelling because he’s concealing his materials, which he doesn’t usually do.” When I suggested asking one of the dealers to explain the materials, Grabner demurred. “The mystery is compelling, so let’s leave it that way; it’s unnamable.”

Before turning back up one of the side aisles, Grabner paused to consult the map again, to make sure she knew exactly where the booths of James Cohan (New York) and Shane Campbell (Chicago) were located; both brought examples of her work. Visibly uncomfortable, she explained that her “stomach lurches when I encounter my own work at fairs, so I need to be prepared.”

Next up was Warsaw’s Raster gallery, where Grabner was immediately drawn to an installation of 48 domestic photographs by Kwiekulik, an artist duo active from 1971 to ’87. Grabner recognized the piece from Documenta 12 (2007). “I’m loving this,” she said, poring over the black-and-white photos of the couple’s infant son playing in bathtubs and toilets and crawling around on the floor. “It’s an absolute highlight. The way it’s displayed, and the fact that you can fold it up and easily transport it, is absolutely part of the piece. And, since I sometimes work with my husband and we have children, it makes me think about the ethics of using your family in your art.”

At the Berlin gallery Cinzia Friedlaender, Grabner ran into her former student Andrew Greene manning the booth. The installation, curated by artist Sabine Reitmeier, featured her own work along with pieces by Roe Ethridge and Megan Francis Sullivan. Ethridge and Reitmeier both blur the line between their art and their commercial photography assignments: in this case an L.L. Bean cover by Ethridge and a portrait of a confused-looking young woman by Reitmeier, who often shoots covers for a German psychology magazine (here the portrait is presented without cover lines or graphics). Sullivan, on the other hand, is represented with a pair of gouache paintings, both copies of Ethridge photos.

New York’s Team Gallery had a new painting by Suzanne McClelland, whom Grabner included in the Biennial. The canvas, scrawled with the number “36 24 36,” was supposed to be in the Biennial but didn’t fit. “This piece refers to the ideal proportions of a woman, and I thought it would fit nicely with the diptych I did include, that references male body builders,” Grabner explained.

On the outside of the Paris gallery Kamel Mennour’s booth, Grabner spied an orange and white striped painting by Daniel Buren. “Buren’s work often circulates in reproduction, and becomes super-graphic. When would I get to see a piece like this from 1970 if not at an art fair?” Grabner said. “Between the Polish collective [Kwiekulik] and this—it feels like an honor to be here.”

‘Emily the Criminal’: Aubrey Plaza Wants to Stick It to the Man