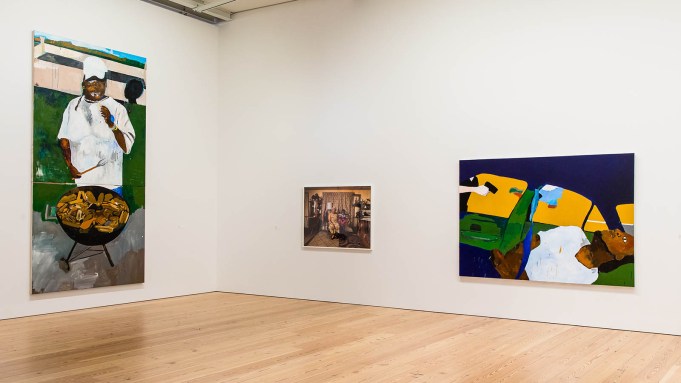 Henry Taylor’s painting has often been discussed in the context of outsider art not only because of his vivid and somewhat reductive figuration, but because of his biography: the youngest of eight children raised by a single mother in Oxnard, California, he held several jobs unrelated to art, including a ten-year stint as a technician at a psychiatric hospital, and didn’t earn his BFA until he was in his mid-thirties. Race and class prejudice are often implicit in art-critical categorizations, but so is the level of success achieved by the artist, and Taylor’s inclusion in this year’s Whitney Biennial is likely to affect the vocabulary used in describing his work: from now on his manner might be more often dubbed “direct” rather than “self-taught,” and “fresh” rather than “naïve.”

The entrance to the sixth floor of the Whitney Museum is dominated by Taylor’s mural-sized painting Ancestors of Ghenghis Khan with Black Man on horse (2015–17). Rife with underlying anxiety, the painting depicts several apparently unrelated scenes. Horses trot across the length of the canvas, their necks extended, their dark bodies taut and angular. Two fair-skinned women sit side by side, looking at the viewer with cool self-assurance. A black man standing near the center of the painting has the facial features, hair, and beard of a Byzantine Christ. Hovering nearby are two unfinished, fragmented figures sketched on a background of pale blue sky and dark ochre mountains. A black jockey in a tall hat completes the scene. He turns his blank, featureless face toward the viewer as his horse carries him past the right edge of the canvas. A stretch of solid blue paint along the top of the composition makes a stale, heavy sky, with a Texas flag suspended motionless in it. The sequence of episodes yields no coherent narrative; the painting is not a story but a series of emotional states.

Four more of Taylor’s canvases hang in a separate gallery alongside photographs by Deana Lawson. The two artists have known each other since 2012. Their artistic dialogue has developed into a friendship, and their works have an intense chemistry, as if they mutually support and complete each other’s depictions of black people’s lives. Lawson’s photographs look like documents of real-life events, but most of them are carefully staged to create ambiguous, psychologically charged situations. Uncle Mack (2016), for example, shows a middle-aged black man with a shotgun and a golden cross on his naked chest; he stands in a corner of a room near the window with the blinds pulled shut, next to a family portrait in an ornate frame. The man’s posture is deliberately nonchalant, but his face looks self-conscious and troubled. A distant echo of this image, Taylor’s Reflecting (2017) is a portrait of a woman in a bright orange dress, which casts a yellow tint on the side of her face. The woman is facing the viewer, but her eyes cut anxiously to the side, as if she is aware of something or someone just outside her field of vision. Behind the woman, silhouetted against the blue sky, is a crudely painted black horse: it looks odd and slightly unnerving, as if a premonition.

While Lawson arranges the outward details in her images to indicate the inner lives of their protagonists, Taylor starts with his own and his sitters’ private emotions, and creates his compositions in response to these inward states. Lawson makes informed and calculated decisions; Taylor intuits and improvises. The conversation between the two artists published in the fall 2015 issue of BOMB illustrates the difference in their mentalities: Lawson directs the dialogue, offering lucid accounts of her projects and asking Taylor penetrating questions about his work. The painter’s contribution is full of non-sequiturs and sudden outbursts. While he provides little specific information about his work, his part in the conversation has an intensely persuasive emotional texture. Taylor’s world is overrun by the rawness of perception, feeling, and memory. In his painting a speck of reflected color is more important to the artist than the coherence of the entire composition. Taylor paints appearances not for the sake of representation, but in response to an immediate need.

Perhaps the most widely discussed of Taylor’s works in the biennial is THE TIMES THAY AINT A CHANGING, FAST ENOUGH! (2017). It is a portrait of Philando Castile, who was shot by a police officer in Minnesota last summer. The painting is based on a video of the incident taken by Castile’s fiancée. Taylor shows Castile lying on his back, a seatbelt snaking across his folded arms. The dark blue frame of the car encases his body like a tomb. Castile appears unharmed; his profile is calm and thoughtful and his left eye, wide open, stares into space. A hand holding a gun is visible through one of the car’s windows, but the focus of the painting is not on the horrific murder or Castile’s role as a victim, but rather on the figure of a young man poised on the threshold between life and death. The portrait’s tranquility brings to mind sculptural figures of knights and saints on medieval sarcophagi.

But Taylor’s most impressive painting in the biennial is undoubtedly The 4th (2012–17). The gigantic piece is 13 feet tall and consists of two stacked panels. The upper one shows the monumental form of a black woman in a white T-shirt; she holds what looks like a potato chip in one manicured hand and a barbecue fork in the other. A deep shadow cast by her hat conceals the upper part of her face. Although the woman’s eyes are hidden by the visor, the darkness beneath it seems to stare back at the viewer with an almost frightening intensity. Rudimentary outlines of a building are visible in the background, and silhouetted against it is the head of a child. The lower part of the diptych depicts an outdoor grill filled with bits of meat and poultry. Its round black form, balanced on a three-legged stand, resembles some kind of ceremonial object. Like many of Taylor’s best paintings, the work transcends the particular circumstances of the depicted event, transforming it into a metaphorical statement of epic proportions. Towering high above the grill, massive and immovable, the woman seems to embody some elemental force. Although her appearance is firmly rooted in the everyday life of contemporary America, the scale, posture, and gravity of the figure connects her to timeless icons of fertility and power, from Paleolithic Venus figurines to traditional African sculpture and early Renaissance Madonnas.

Taylor’s past employment at a mental hospital, where he watched patients draw and occasionally painted their portraits, might have taught him some lessons in channeling his and other people’s emotions and anxieties into painting. This skill seems particularly important today, when American society suffers from a collective neurosis manifested in disruptions of the political, social, and cultural status quo. Taylor’s works in the biennial, all painted or modified in 2016 and 2017, are solemn, apprehensive or troubled, but his large mural the floaters on the High Line strikes a lighter and more cheerful note. Based on a 2016 self-portrait, it shows the artist in a swimming pool supported by green foam noodles. Next to him is a white man with a canned drink in his hand, his head and feet cropped by the sides of the painting. Despite all its troubles, the floaters seems to say, the world still has room for hope and belief in better times to come.

From Burberry to Tod’s, the Most Luxurious Discounts Online This Week

It’s Official: Amazon Prime Day Part 2 Is Coming in October To Kick Off the Holiday Season