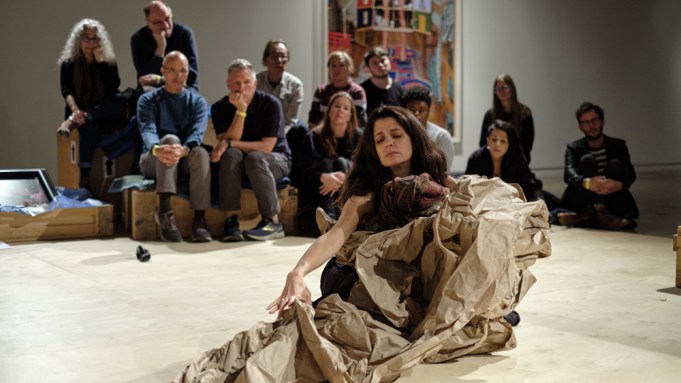 Janine Antoni’s work is comfortably cemented in contemporary art history. Documentation of her 1993 performance Loving Care—in which she mopped a gallery floor with her dye-soaked hair—is a staple of art school lectures. She remains active today, producing polyurethane and marble sculptures, videos, and performances. During an absorbing lecture at the University of Texas in Austin earlier this month, Antoni stressed that the question driving her work is: “How can I show my process of making on the surface of the object?” “Paper Dance,” on view at the Contemporary Austin’s Jones Center through March 17, is a messy, participatory, perpetually in-process exhibition gathering thirty years of work by Antoni. It is accompanied by a program of fifteen iterations of a 2013 solo dance piece, also titled Paper Dance, that she developed in collaboration with pioneering postmodern choreographer Anna Halprin. Antoni’s idiosyncratic curiosity unfolds in real time, and the show nods to “Ally,” her experimental survey at the Fabric Workshop in Philadelphia in 2016, which included Paper Dance performances along with other movement collaborations with Halprin and experimental choreographer Stephen Petronio. A traditional retrospective might have made Antoni’s output too tidy, betraying how intermittently inglorious her working methods, which famously include gnawing on quarter-ton cubes of chocolate and lard, can be.

“Paper Dance” has gone through a consistent public evolution over the last two months, as the artist and the museum’s art handlers have publicly unpacked and installed, then deinstalled and repacked, more than thirty works as viewers watch. The exhibition’s composition and arrangement has shifted over three phases to address three core themes in turn: motherhood, identity, and absence. The shipping crates that Antoni’s works arrived in are a constant presence, and have been reconfigured regularly in the installation. But any exultation of the crates’ materiality gets complicated by their additional, utilitarian function as seating for performance audiences. “Paper Dance,” with its three phases organizing the artist’s oeuvre conceptually, intuitively, and playfully, rather than chronologically, has been a clever installation-as-choreography that advances Antoni’s career-long goal of demystifying her process.

Celebrated Antoni works make requisite appearances. Lick and Lather (1993)— a pair of busts cast in the artist’s likeness in chocolate and soap, their surfaces worked over by the actions respectively named in the title—was on view during the show’s second “Identity” phase. The third and final phase, “Absence,” which started on February 27, included Conduit (2009), an installation consisting of a copper sculpture designed after those devices that allow a person with a vagina to pee standing up and a framed chromogenic print of the artist on the windy edge of the Chrysler Building, urinating through the object.  The piss-patinated thing perches like a little gargoyle on a white plinth nearby. Two works have remained on view throughout the exhibition: Wean (1989–90), a line of impressions in the gallery wall in the shapes of, respectively, the artist’s breast, her nipple, latex nipples for baby bottles, and the packaging for such bottles, as well as a looping video excerpt from the original 1965 performance of Halprin’s dance piece Parades and Changes in Sweden. But the bulk of the works have spent most of the show’s run entombed in the wooden crates, which are marked with proprietary labels including that of Antoni’s New York gallery, Luhring Augustine. The crates have recalled, by turn, wombs, characters, or memorials, depending on the show’s phase. They gave audience members a rare glimpse into where contemporary art objects live out their days.

In each of the fifteen live performances, Antoni incorporated something from her mentor: the rolls of brown paper that Halprin purchased for Parades and Changes but never used. After Antoni took one of her workshops, Halprin agreed to her proposal for a collaboration and invited Antoni to her home in California. Halprin set Antoni loose with the rolls of paper on her fabled dance deck, designed by her husband, landscape architect Lawrence Halprin, mentioning that she might want to get naked. Nudity, primarily absent from Antoni’s own performance work, was an important part of Parades and Changes, and created controversy around the piece’s United States debut in 1965. (Halprin has mentioned being summoned for indecency as a result).

Before the final “Paper Dance” performance on March 2, a large audience explored the exhibition while Antoni and art handlers unpacked and installed to quench (2015), a polyurethane resin wall sculpture of a kitchen cabinet topped with a hybrid object, half breast and half pitcher. I sat down on the crate containing Bridle (2000), a full Holstein cow hide and backpack sculpture, inches away from the already unpacked to long (2015), another polyurethane resin piece, this one a plinth supporting a sculpture of a head melting through a ribcage. An art handler drove a vertical lift through the space and hung a chain from a crossbeam. Antoni hurried over to help install Unveiling (1994), a veil-shaped bronze bell with lead clapper. Parades and Changes played from a small projector on one wall, to the sounds of the Beach Boys playing from a tinny speaker. Viewers seated themselves on other, crated works. In one corner of the room stood a mountain of brown paper from previous performances. Against an adjacent wall, the last roll of brown paper leaned against a blue painter’s tape strip with the date written on it; fourteen other strips where similar rolls had leaned kept a record of the prior dances.

The lights dimmed. Petula Clark’s “Downtown” played on the video’s soundtrack. Antoni climbed right over me onto a crate, watched a minute of Halprin’s video, and then turned off the projector. She grabbed the final roll of brown paper, headed to the dance floor, and unrolled it as if it were a red carpet. Over the next hour, she crinkled and pulled the paper into surprising forms, gazing at several of her past works and reimagining them physically through Halprin’s gift to her. On all fours, Antoni cloaked herself with the paper to create a version of her sculpture Saddle (2000), a rawhide molded to suggest the form of her crawling body.

She was quietly funny throughout, entertaining the children in the audience with side glances and winks, like a maternal Gilda Radner who knew how silly all this adult culture probably looked to the kids. Wrapping herself into a brown paper cocoon in a more serious moment, she then ripped a heart shape from her chest and ceremonially installed it in the ribcage of to long. After stripping nude and writhing in the paper, further exploring its crunchy properties, she eventually put her bra back on and cartoonishly stuffed it with paper, eliciting laughter from the audience. Later, she gathered up a bulging wad of paper into her shirt (which she was now wearing as leggings) and pantomimed giving birth to it. At the end, she meticulously gathered every bit of paper and errant clothing from the floor and hurled it into the pile in the corner.

The sheer volume of references, both serious and slapstick, to her own work was noteworthy. Halprin, it seems, gave Antoni another gift in addition to the paper: permission to reconsider each of her works not as a relic from space and time, but part of an ongoing dialogue between the artist and the audience. Antoni’s process has been made visible and imperfect throughout “Paper Dance.” Perhaps that is how this complex retrospective packed with manifold conceptual elements manages to feel inviting and patently unpretentious.

This $24 Million Was English Manor Was Built in 1686. Now It Has Its Own Helipad.