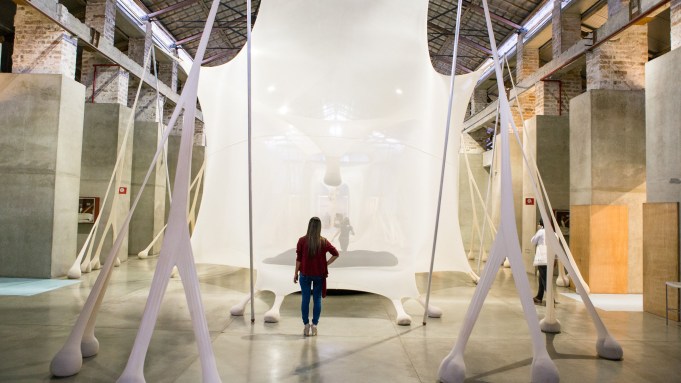 This year, the “Nacional” in Colombia’s Salon Nacional de Artistas in Medellín was prefixed by inter, indicating the show’s international aspirations. The Salon (through Nov. 3), which began in Bogotá in 1940, this time features 100 artists from 24 countries. However, most of the participating artists are Colombian, a lineup that keeps the international Salon in line with local culture and society.

The Salon’s theme, “Saber Desconocer” (To Know Not to Know),  according to the show’s organizers, is about testing the limits of contemporary understanding and envisioning alternate systems for cultural production. Working under the artistic directorship of independent curator Mariangela Méndez, a team of curators—Florencia Malbran of Argentina, Javier Mejía and Óscar Roldán-Alzate of Colombia, and Rodrigo Muora of Brazil—created a far-reaching encapsulation of cultural issues affecting the international art world and the Medellín community.

Venues include the Museo de Arte Moderno de Medellín, the Museo de Antioquia, the Edificio Antioquia, and the Jardín Botánico. The section at the Museo de Arte Moderno best synthesizes the Salon’s title. The museum, which is housed in a repurposed factory, has two wings. On one side, the section titled “Destiempo” (Untimely) examines the relationships among time, space and travel. Organized around a stopped clock from the Bogotá train station, the gallery features Il sentiero verso oltremare (Along the Path Toward Beyond the Sea), 1992-2013, a floor work by Italian artist Giovanni Anselmo that comprises two aquamarine rectangles painted on adjacent walls connected by a line of earth spilled on the floor. In this context, the piece resonates with a never-completed train system in Colombia, aborted due to the country’s mountainous terrain.

Before getting to the other side of the museum, the viewer must first encounter Ernesto Neto’s Lanavemadremonte (Mothership), 2013, an enveloping installation made out of netting, sandbags and spices. The netting, which channels the uncanny domesticity of Louise Bourgeois’s work, is suspended from tall metal poles, allowing the viewer to enter a strangely maternal environment. Past that is “Estado Oculto,” curated by Moura with his frequent collaborator, Paulo Maia. This gallery addresses knowledge of indigenous or traditional communities, and how that knowledge functions within the system of contemporary art. The room unfolds around a central vitrine of forged pre-Columbian pottery. Thought to have come from an unknown community, the Cerámica Alzate was very valuable before it was all revealed to be fake. Fleeting authenticity also plays a role in Vincent Vulsma’s Foreign Exchange (2011), clothes featuring Walker Evans’s photographs of African textiles.

Next to Botero Park in downtown Medellín, the Museo Antioquia houses many works treating key social issues. Environmental destruction and the preponderance of disposable plastics inspire Jean-François Boclé’s Everything Must Go (2013), a room filled with a sea of blue plastic shopping bags, and Benvenuto Chavajay’s “Suave Chapina” (soft flip-flop) series, floor sculptures made of river stones strung together with flip-flop straps. Violence, long closely associated with Medellín, is the subject of many pieces, although it is unfortunately dealt with very literally in many of them. With the exception of Juan Fernando Herrán’s “La Vuelta 1” (2013), a series of elliptical interviews with former assassins who are speaking about their motorcycles, the pieces dealing with bloodshed feel like yellow journalism.

Across town, the Jardín Botánico features three large installations, including Geografías Deshechas (Undone Geographies), 2013, an inverted ziggurat of truck tires by the Medellín-based Fredy Alzate. The piece is a surreal abstraction of the shantytowns and landfills for which the city was once known.

Before the Salon, the Edificio Antioquia was the former revenue office for the state government. Abandoned and in disrepair, the building was cleaned up for the exhibition, and it is home to some of the most engaging site-specific work. Difficult to forget is Carlos Uribe’s Manantial (2013), a decrepit office flooded in aguardiente, Colombia’s infamous anise-flavored liquor.

Downstairs, it also smells of alcohol. La Heladería (The Ice Cream Parlor), a bar and coffee shop designed by Colombian artist Alejandro Mancera, was created to integrate the Salon with the community. In a Skype conversation, Mariangela Méndez said that the organizers purposefully avoided creating a reading room or an archive. Instead, the mission was to provide the place “where you meet and talk about what you just saw . . . an active, lively place to extend the enthusiasm and party ambiance of the opening.”

To many people, Medellín once meant cocaine and narco-terrorism. But as the visitor to the Salon quickly realized, it is now home to progressive public transportation initiatives, new libraries and a hearty, inclusive version of contemporary art. As such, the Salon became an example of localized arts activism, and with that, a viable alternative to the current surplus of international biennials.