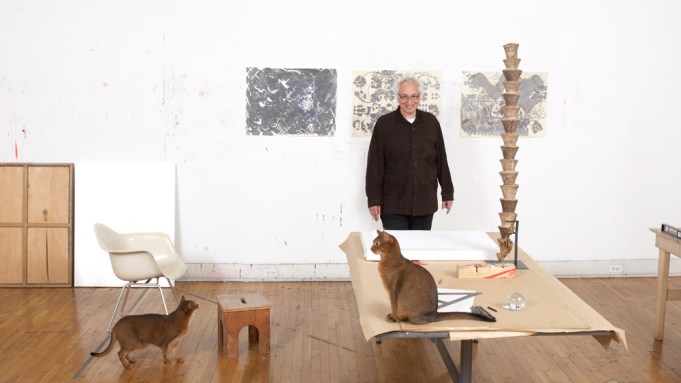 A creator of lush abstract paintings driven by a rigorously graphic sensibility, and graphite drawings of painterly depth, Terry Winters has been negotiating competing impulses for more than 30 years. The recognizable biological forms—plants and shellfish, at one scale; cellular and crystalline structure, at another—that appeared in his early work gave way, by the ’90s, to more resolutely nonfigurative compositions whose sources are hinted in series titles: “Computation of Chains” (1995-98), “Set Diagram” (2000-02), “Turbulence Skins” (2002-04). Without completely abandoning his interest in depicting the real world, Winters turned away from tangible objects toward the kinds of spaces being investigated by mathematicians and physicists, and toward the spatial metaphors, technical processes and informational resources of digital technology. All continue to inform his work. At the same time, he has remained deeply committed to hands-on, first-person execution.

Winters’s interest in exploring space in unconventional ways has extended to installations, notably when he collaborated with Rem Koolhaas for a 2001 exhibition at Lehmann Maupin gallery, then in SoHo, which the architect partially lined with plywood; three of the 60 paintings on view were hung on the ceiling. Also in 2001, the Metropolitan Museum of Art presented a survey of Winters’s prints, showcasing a medium that has long held special interest for him. An exhibition of work in all mediums spanning the decade 1994-2004 originated at the Addison Gallery of American Art in Andover, Mass. in 2004 and traveled to museums in San Diego and Houston [see A.i.A., Apr. ’05]. Winters’s first major museum show was organized in 1991 by the Whitney Museum of American Art.

The exhibition of recent work that opened at Matthew Marks in November was Winters’s seventh at the gallery. Called “Knotted Graphs,” it featured selections from several bodies of work in addition to seven big canvases from the titular series (all works were completed in 2008). Though some elements discernibly differ from one series to the next—an underlying grid is slightly more apparent in the “Knotted Graph” paintings than in the “Illustrated Set” works—kinships prevail. Luminous color, in particular a marine blue that suggests stained glass, distinguishes the entire group of paintings. A bulbous, burgeoning module that in one permutation or another has recurred throughout Winters’s career appears repeatedly. It generally takes the form of a soft shape bound by string that leaves its mark in negative, as if it had been applied to the surface of the painting and then pulled off.

The paintings are composed in layers, so several iterations of these modules often shadow each other; the effect suggests a deliberately misregistered print. Often, the surfaces begin with two or more mutually interfering patterns: wavy parallel lines and grids, or helixes. The transparency of the oil paints that Winters uses, and the simplicity of his palette, contribute to a remarkable degree of lucidity, given the predominant impression of barely constrained chaos. We are made aware, as Winters wants, of every decision that has gone into each work. At the same time, he has us chase the elusive moment at which line becomes form, pursuing what could be called a string theory of visual description. The complicated spaces that the drawings seemingly create both behind and, more surprisingly, in front of the paper’s surface expose Winters’s thinking most clearly. Which is to say, we feel we would like to know more.

Born in Brooklyn in 1949, Winters received a BFA from Pratt Institute in 1971. He now splits his time between Tribeca and rural Columbia County in upstate New York. The following interview took place in November at his Manhattan studio.—NP