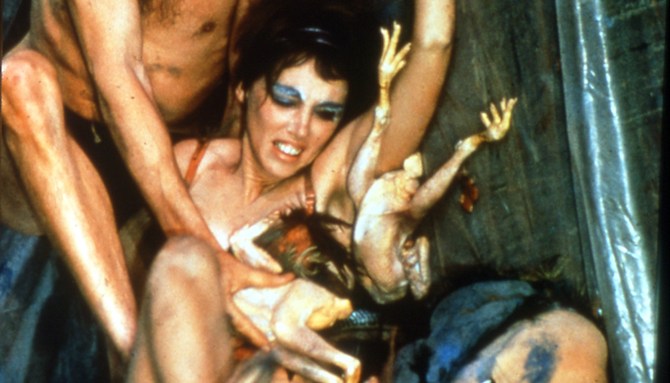 Though Carolee Schneemann has published regularly throughout her career, and a great deal of her written work is collected in More Than Meat Joy (1979) and Imaging Her Erotics (2003), much of her early writing came out in small magazines and has been scarce ever since. Uncollected Texts (Primary Information, 2018), edited by Branden W. Joseph, brings many of these short works back into print, just as Schneemann’s work is finally receiving major institutional attention (“Kinetic Painting,” a six-decade retrospective, is on view at MoMA PS1 through March 11).

Like her film and performance works, Schneemann’s writings are generically disparate; they range from essays to letters to notes to journal entries. Some are written in the style of artistic polemics of the 1960s, pointedly connecting form to liberationist politics. Others are intimate records of experience. The collection spans from the ’50s to the early ’80s, illuminating the thinking behind Schneemann’s formative works and providing a real-time glimpse into the development of her aesthetics.

For decades, Schneemann has been experimenting with recording intimacy in performance, film, and texts. The most well-known of her literary writings is probably “Parts of a Body House,” a walk-through of an imaginary installation composed of rooms corresponding to human anatomy: The Liver Room, The Nerve Ends Room, The Kidney Room, etc. It’s a vivid, funny, and tender piece about the body as both ever-present and unknowable, and it resonates with the physicality of her performance work.

Beginning as a painter, Schneemann became increasingly inspired by new experiments in theater (she was an early member of the Judson Dance Theater and participated in Happenings), literature (she published in small-run poetry magazines), and film (she wrote about Kenneth Anger and Stan Brakhage). Her readings of anti-establishment philosophy—especially Simone de Beauvoir, Antonin Artaud, and Wilhelm Reich—further solidified her interests in the body, technology, and feminism. By the early ’60s, Schneemann had pushed her work entirely off the canvas and into the realms of performance and film, all while maintaining that she remained a painter in an expanded sense—a position she holds to this day.

Like much avant-garde art of the period, Schneemann’s early work is explicitly concerned with breaking down the relationship between art and life. In Meat Joy (1964), the nearly naked performers roll around with hot dogs, fish, and chickens; it’s not so much about provocative spectacle as about the eroticism of trusting and playful bodily contact. In Snows (1967), the performers crawl and drag each other within an installation littered with “atrocity photos” from the war in Vietnam while Schneemann’s film Viet-Flakes (1965), a montage of similar photos, is projected on a screen. It is an attempt to foreground the reality of the war, and in particular, the reality of complicity: it points to the fact that the relative comfort of the audience and performers is predicated on violence. Beyond making a didactic point, she wanted her works to be physical experiences that resonated with, but did not explicate, these concerns. In “Meat Joy Notes” (1967), she expresses this desire in physiological terms:

I wanted my audience to be an energy complement enclosing and corresponding to the energy stream of performance. I placed the audience as close as possible to the performance area, surrounding it like a skin. My overall conception is that of a sensory arena.

As Schneemann writes at the end of the piece, she’s “not interested in fantasy;” she’s interested in experiences and interactions between people, and in sensory immediacy as a form of knowledge. Given the insistence on direct reality, it’s surprising that one of the most recurrent words in Uncollected Texts is “metaphor.” She writes that her works are “metaphors of sensation;” she says that performance allows for “involvement with changing metaphors;” and she argues that the violent images and actions in Snows are “ambiguous, shifting metaphors in which the performers are simply themselves, as well as victim, torturer and tortured, aggressor, loved and beloved.”

Though her use of the term is idiosyncratic and sometimes ambiguous, it’s clear that Schneemann is claiming that her work simultaneously constitutes a real experience for the performers and audience while also offering flexible terms by which that experience can be connected to larger social and political concerns. Similar to her insistence on participating in her performances—so as be both “image and image-maker”—the rhetorical framing of her work as both real and metaphorical is an anti-heroic strategy: Schneemann does not want to stand outside of her work, as she claims male directors do, nor does she want her work to be isolated from the world around it. The performances are designed to be transformative experiences for the participants as well as metaphoric models for social and erotic interactions. In “Statement in Contemporary Artists” (1977), she describes the aims of her Kinetic Theater:

The question of metaphor is one place where Schneemann’s feminist politics meet her interest in literature. She uses writing to wrestle her self-representation back from male culture, and to elaborate nonpatriarchal concepts of everyday life and the body: her diaristic style can be read as a formal metaphor for attention to intimate minutiae. Unlike the sensory overload of her performance and film pieces, most of her literary experiments are more quotidian and direct.

Her writings on the deaths of Eva Hesse, Ken Dewey, and Paul Blackburn are plaintive, pained notes on the sadness of losing friends. Her notebook entries, dream journal selections, and letters do not read as if they were originally intended for publication, and don’t provide context for the events and feelings recorded; they stand as fragments of lived life. Her feminist statements are direct and personal, urgently fed up with the daily harms that women endure in social spaces built by men. Beyond providing insight into her early works, the pieces in Uncollected Texts record the subtle intimacies of interpersonal relationships, artistic and intellectual connections, and her sensation of her own unfolding ideas. Like Schneemann’s works in other media, her writings manifest experience while also serving as metaphors for openness, sensuality, and connectivity.