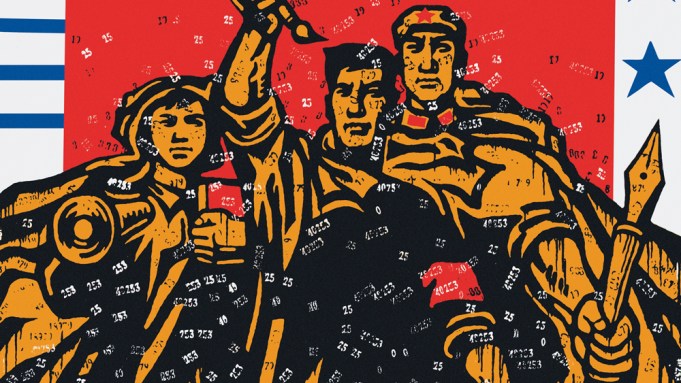 China’s huge economy, rapid urbanization, environmental and social problems, and swelling ranks of both millionaires and migrant workers are not the only things that capture headlines in the West. Every so often, something in the Chinese art world makes us sit up and take notice—whether it’s the latest provocation by Ai Weiwei or a record-breaking sale in the auction rooms. Such events serve to remind us that our comfortable assumptions have been changed forever. In 2008, the dazzlingly self-congratulatory ceremonies for the Beijing Summer Olympics, followed by the collapse of Lehman Brothers in New York that fall, signaled both a surprising economic vulnerability in the West and the coming of age of a new global power.

Jane DeBevoise’s scholarly book Between State and Market: Chinese Art in the Post-Mao Era is rooted in her longtime engagement with Chinese art and culture (she first went to China as a UC Berkeley exchange student in 1980), and comes on top of a career divided between banking and art history. Fluent in Mandarin, DeBevoise holds a PhD in art history from the University of Hong Kong and spent 14 years as managing director at Bankers Trust Company (working in New York, Hong Kong, Tokyo and London) before serving as a deputy director of the Guggenheim Museum, New York, from 1999 to 2002. She currently heads the board of directors of the nonprofit Asia Art Archive, Hong Kong and New York, which houses some 50,000 physical and digital items documenting contemporary art activity in Asia.

Although the book is—not surprisingly—thoroughly researched and scrupulously objective in tone, it does occasionally draw on personal materials from some of the key figures of the time, including unpublished interviews with artists and curators. Precise in its scope (focusing on experimental art, while acknowledging a larger context of more traditional work), the volume covers the period from the beginnings of an independent artistic scene in China (after the death of Mao in 1976), through the era of market reforms, to the incipient engagement of Chinese contemporary art with the international market in 1993.

While offering a generally positive critical appraisal of the era’s experimental work, Between State and Market also provides a socioeconomic history of the Chinese art scene during the country’s turbulent years of transition. Arguably, the shift remains incomplete from what the critic Fei Dawei described in 1985 as a state-run “Soviet-style model where the government is the sole source of financial support for artists, the sole organizer of exhibitions, and the sole publisher of works.” Though now partially subsumed by globalization, the issues raised by direct government control of cultural expression are still relevant—and extensively discussed in the first section of the book.

The Maoist insistence on a blatantly rhetorical “art for the people” is long past. Yet, even today, there remains a state system for meting out financial support, guidance, tolerance, censorship and control. Institutional shows are still officially vetted, historical exhibitions and conservative academies still receive the lion’s share of funding, and relatively little artwork—except for occasional cagey avant-garde provocations—directly challenges the norms of a largely consensual society. Fittingly, therefore, DeBevoise recounts how the progressive liberalization of the state-run institutions in the 1980s was punctuated by setbacks like the Anti-Spiritual Pollution Campaign of 1983-84 and the Anti-Bourgeois Liberalism Campaign of 1987.

The foundation for a controlled liberalization of the economy was laid in a series of speeches that Deng Xiaoping, then the de facto head of state, made to the Party faithful toward the end of 1978. Deng revealed that the Four Modernizations (targeting agriculture, industry, defense and science) would entail price deregulation, the gradual freeing of markets, some private enterprise and an embrace of foreign trade and tourism. His cautious moves were accompanied by an exhortation to “emancipate the mind and seek truth from the facts.” In artistic terms, this encouraged the formation of independent artist groups, such as the Stars, whose experimentation with new forms was tacitly approved by the authorities.

Yet one of the key artistic controversies of these years, to which DeBevoise devotes an entire chapter, stemmed from the award of a major prize at the 1980 National Youth Art Exhibition to a sympathetic, tightly cropped, monumentally scaled portrait of a peasant’s face by the young Sichuan artist Luo Zhongli. The close observation and painstakingly detailed execution of this painting, titled Father (implying the new generation’s ongoing debt to China’s agricultural masses), sparked a national debate on the subject of “realism” (or, we would say, “naturalism”) versus “comprehensibility.”

Portraits of this size had previously been devoted solely to government officials, whose messages were unambiguous. Luo’s work, however, allowed room for subjective interpretation and placed formal qualities on a level with explicit subject matter. This eased the path to public acceptance of the Scar Art movement, a state-sanctioned acknowledgment of the suffering endured by the populace during the Cultural Revolution.

By the mid-1980s, a gap had opened up between government sponsorship and the nascent market economy, enabling the formation of a genuine avant-garde that included regional art groups, such as the Pond Society, which explored new ways of bringing art closer to ordinary people’s experience. The ’85 New Wave movement then developed innovative platforms of communication, notably private exhibition spaces and quasi-independent magazines, and daring forms of expression like performance art and installation.

For DeBevoise, as for most historians, the watershed event in post-Mao China was the 1989 Tiananmen Square massacre (which she rather coyly terms an “incident”). Less than four months before that tragic confrontation, in which demonstrators from the Central Academy of Fine Arts played a prominent role, critic-curators Gao Minglu and Li Xianting had successfully staged the landmark “China/Avant-Garde” exhibition, twice closed down by the authorities and twice reopened within the space of a mere two weeks, in rented exhibition halls in the National Art Museum of China (NAMOC).

DeBevoise provides a vivid account of the contradictory background to this exhibition, which still fell within the framework of state sponsorship but somehow eluded the control not only of the authorities but also of the well-intentioned organizers. In her reading, this was the first time a group of artists and critics had succeeded in staging a full-scale Western-style exhibition of experimental art for the general public. The show was independently conceived and financed, but the organizers had to accept three relatively modest conditions from the authorities—that there should be no anti-Communist content, no pornography and no live performances.

The last of these restrictions was immediately broken. Wu Shanzhuan set up a stall selling shrimp as a spirited protest against the role of the museum and the critics in deciding what art the public should “consume.” Li Shan washed his feet in a basin bearing an image of Ronald Reagan. Huang Yong Ping, “performing” more indirectly, drew up plans to attach a network of ropes to NAMOC and haul it away.

Most dramatically, however, Xiao Lu fired two pistol shots into her own installation, setting in motion what Li Xianting called “the mechanism by which the China/Avant-Garde Exhibition and the ’80s avant-garde movements it represented were led to the execution block.” Authorities quickly associated experimental art, especially crowd-gathering performances, with the kind of social unrest that erupted in Tiananmen Square.

That “incident”—capped by a deadly show of force by the government—changed everything. The most adventurous artists went into exile, hunkered down at home, abandoned hopes of collective action, dreamed of commercial success abroad or simply gave up making art altogether. By the time officialdom began to relax a bit two or three years later, the impetus of China’s avant-garde had already changed. Fame and fortune, DeBevoise contends, were now among the goals of the artists who produced the socially satiric Political Pop and Cynical Realism of the 1990s. Their chief method was the occasionally humorous exploitation of popular culture, political propaganda and commercial advertising—often visually fusing Chinese and Western values. The book’s final chapters are largely devoted to the success of these artists in attracting new audiences and securing financial independence from the state. Characteristic of them is Wang Guangyi, whose work combines famed brand logos with bold images from Cultural Revolution propaganda posters.

Between State and Market ends with globalization and the avant-garde’s offshore forays, first in Hong Kong with the commercially inspired 1993 exhibition “China’s New Art, Post-1989,” which went on to tour internationally, then at a number of other important foreign venues, including the Venice Biennale. Beyond the book’s purview are the formation of artists’ villages, the boom in the international market for contemporary Chinese art and the growth of an increasingly strong collector base in China itself (now the world’s second largest art market, if Chinese figures can be believed 1 ), the rejuvenation of ink painting and other national art forms (attended by nationalist stirrings), and the vigorous growth in international biennales and art fairs.

The relationship between aesthetic and commercial value is as difficult to assess within China as without. Perhaps wider reference to the Chinese diaspora and to the impact of globalization on other artistic economies would have helped here. Nevertheless, the fine particularity of DeBevoise’s approach makes Between State and Market an ideal starting place to assess the underlying forces at play in the artistic scene in China today.