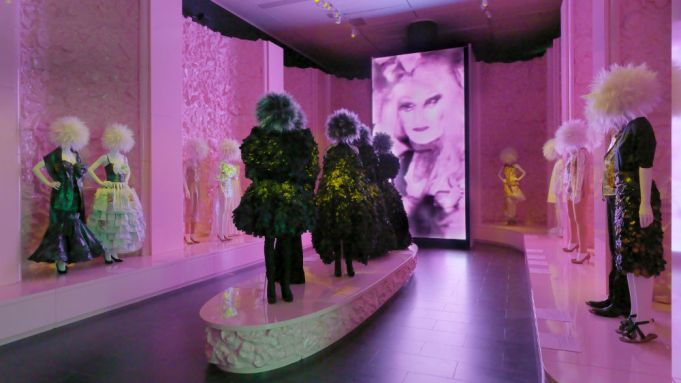 Scott Treleaven never partied with punk musician Richard Hell, or shopped at Seditionaries, the boutique founded by Malcolm McLaren and Vivienne Westwood. At 40, the Toronto-born, New York-based artist is too young to have participated in the original punk movement, which was founded in London and New York in the early 1970s; many purists say it was over in 100 days. But he strongly identified with punk in his teenage years, as a queer youth. “I was chased and beaten up and attacked for trying to set myself apart,” he said. “Punk was queer before it was even punk.” So he was game to walk through “Punk: Chaos to Couture” at New York’s Metropolitan Museum of Art with A.i.A. recently.

In 1996, Treleaven founded The Salivation Army, a zine that combined elements of punk, goth and “queercore,” an LGBT subculture. It gained such a cult following that in 2002, he filmed a documentary about the founding of the publication that mythologized its mission of activism for queer youth.

Today, although subcultures still influence his films, photographs and publication, he doesn’t consider himself a punk; rather, his interest in the movement is more of a sociological and cultural concern. Still, his work explores marginalized movements. Currently, it is included in “White Petals Surround Your Yellow Heart,” a group exhibition at the Institute of Contemporary Art Philadelphia (through July 28) that considers how artists explore clothing, self-presentation and sartorial self-expression.

Before we entered the exhibition, we spent some time in the atrium, which featured, along with two mannequins—one wearing a bondage outfit by Westwood and McLaren, and another in House of Dior—a projected film of the Sex Pistols playing live at London’s 100 Club in 1976. There, Treleaven explained  his theory of the origins of punk, which he thinks emerged from a generation of children growing up in the wake of the atomic bombing of Hiroshima. “The good guys actually turned out to be the most colossal monsters imaginable,” he said. “When you grow up and realize that the people on your side can make genocidal gestures-the only thing it provokes is despair.” It is from this despair that he believes the punk ethos of “no future” emerged.

“It’s ironic we’re having this discussion when it’s just been revealed that the ‘good guys’ like President Obama are spying on every human being in the United States,” he said. “We expected so much.”

Treleaven registered, but did not linger over, the film footage of Patti Smith and the ersatz bathroom from CBGB that dominated most of the following gallery. In the second gallery, he lit up. The walls were lined with original muslin T-shirts by Westwood and McLaren, upon which were screen-printed familiar punk slogans like “god save the queen” and “anarchy in the UK,” both from Sex Pistols songs. Treleaven stopped in his tracks in front of one that featured the text of a letter from Westwood to Derek Jarman, the author, filmmaker and queer activist who died from AIDS-related illness in 1994.

Jarman, it turned out, had been one of Treleaven’s heroes. “I was living in London in 1991, and I collapsed on my way to work from lack of food,” he said. “Sort of miraculously, Jarman found me, and looked after me for the day. I was reading his book Modern Nature at the time, which is a formative text for me.

“It’s funny to see his name here, but it also breaks my heart,” Treleaven said.

As we continued to make our way around the room, he pointed out T-shirts he recognized, both from his research and because he has been collecting Westwood clothing from the ’70s for many years. “The political climate today is so much more intolerant of sexuality than it was in the punk days,” he said. Pointing to a shirt that featured an image of a naked under-aged boy smoking a cigarette, he continued, “You could never wear something like that in public now!”

Eventually, we turned our attention to a platform in the center of the room, which featured mannequins, many of them wearing punk-inspired couture by designers such as Rodarte, Alexander McQueen and Balmain. The outfits are gorgeous—artfully torn fibers clinging to forms, leather studded so that it looks like jewelry—but they lack the political consciousness and rage that were present in the T-shirts.

“You can see the gulf between this stuff and the original artifacts,” he said. “I want to know the machinations that allow the transition between fashion that confronts the status quo to fashion just being shit you can buy in a boutique.”

In the next gallery, the mannequins stood on raised platforms in alcoves along the wall. They wore Versace safety-pin dresses, along with dresses featuring DIY hardware by the likes of House of Givenchy, Viktor & Rolf and Dolce & Gabbana. “This looks like a sort of mausoleum garden,” Treleaven noted.

In the following room, the mannequins wore plastic and Fed-Ex envelope dresses by Martin Margiela, and a variety of white dresses made from appropriated trash bags by designers such as Gareth Pugh and House of Moschino.

“The connections to punk here are just so spurious,” Treleaven noted. “These designers aren’t appropriating these cheap materials because they feel marginalized, or alone, or because they have a narcissist complex they need to act out in their clothing. They’re just creating product for a market that’s bored and hungry.”

Just as Treleaven’s mood turned hopeful—he was discussing a recent dinner he had with punk historians Michael Bracewell and John Savage, in which they said that the spirit of punk will keep on renewing itself—we ran into the gift shop. “Fuck me!” he proclaimed. It held nothing out of the ordinary—exhibition catalogues, tiny Vivienne Westwood shoe ornaments, Sex Pistols vinyl records packaged in shiny plastic—but it was a reminder of just how much punk had been swallowed up by consumer culture. “Rebellion can’t live in this,” Treleaven said.

But for Treleaven, the spirit of punk can live on. A punk, he said, shows his belief system through direct action. “The most punk thing in the world is showing up,” he said. “It’s being present in a performance or act that pushes your personal resistance against the reigning cultural regime.”

Is Aging Whisky Bad for the Environment? Scotland Just Commissioned a Study to Find Out.