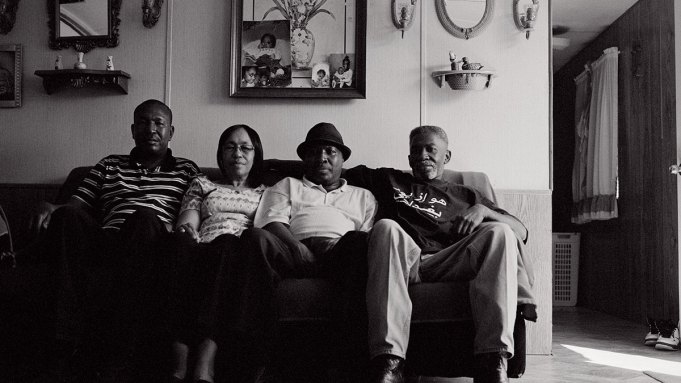 African Americans make up almost twenty percent of our country’s rural poor and their poverty rate is twice that of rural whites. Yet we seldom hear about the plight of rural black Americans in the media, where narratives about black poverty skew toward urban areas. Isabelle Armand’s photobook, Levon and Kennedy: The Mississippi Innocence Project (powerHouse Books, 2018), shot in the predominately black community of Noxubee County, Mississippi, serves as a corrective, offering us a window into an overlooked population.

Armand, a veteran photographer who has shifted from fashion to magazine to documentary work, spent over five years visiting and photographing the lives of Levon Brooks and Kennedy Brewer, two African American men living in rural Mississippi, who were convicted and sentenced, respectively, to life in prison and death, for separate crimes they did not commit. Brooks was incarcerated for sixteen years and Brewer for thirteen before they were exonerated by the Innocence Project, a nonprofit that works toward overturning wrongful convictions. In a sense, Armand’s book is an extended portrait of the lives they were nearly never allowed to live. Her black-and-white photographs return some of the dignity and humanity that was denied to them by the justice system.

The book is also a portrait of place. Racism remains ingrained into the very land in Mississippi. The state’s black population, more rural and agricultural than anywhere else in the country, remained landless for much of the twentieth century because of a combination of racist legislation (like vagary laws) and militant aggression on the part of whites (like night riders attacking black-owned farms). Such structural barriers have had a lasting impact. “Material poverty,” novelist Jesmyn Ward has written, “is persistent . . . for all black Mississippians: It cleaves to generations, passes from grandmother to mother to child like a genetic trait.” Today, over thirty-two percent of the state’s African Americans live below the poverty line, which is ten percent higher than the national average. In Noxubee County, numbers are even greater, with over seventy-eight percent of African Americans living in poverty (compared to fifteen percent of whites).

These histories of slavery, sharecropping, and segregation are visibly traceable in Armand’s photographs. She depicts the two men and their families against the backdrop of an overgrown and uncompromising southern landscape comprised of cypress trees, swamps, and vast fields; abandoned buildings in empty downtowns—Macon, Brooksville, Crawford, Artesia—where Brooks and Brewer’s families live and work; and plantations. Her stark photographs look through tall grass, bare trees with wild, twisting branches, still water, and stretches of empty land that evoke neglect and a sense of desolation.

Even the most idyllic shots take on darker overtones. One picture shows Brooks’s grandson, Jeremy, intently looking into the eyes of large black horse that bows its head on the other side of a wire fence. As the horse moves gently closer, the young boy stands with his hands clasped in front of him, patiently waiting. There’s an innocence in the interaction between these two beings that begins to dissipate when you grasp the significance of their location. Jeremy stands at the plantation where his grandfather was born and where his family had worked for generations. The photograph serves as a reminder of the proximity of the past.

In 1992, Kennedy Brewer was arrested for the brutal rape and murder of Christine Jackson, his girlfriend’s three-year-old daughter. After awaiting trial in jail for three years, he was convicted and sentenced to death. The weight of Brewer’s conviction largely rested on “bite-mark identification,” conducted by Dr. Michael West, a forensic dentist. This method of forensic matching is now widely considered unreliable.

In 2000, Brewer wrote a letter to The Innocence Project. They successfully advocated for DNA analysis, which excluded Brewer as the perpetrator of the crime. But because the prosecution wanted to retry him, he remained in jail for another five years. An additional round of testing in 2007 matched a new suspect. He confessed to the murder, and the practically identical rape and murder of another three-year-old girl committed twenty months prior, for which Levon Brooks had been sentenced to life imprisonment. Brooks’s conviction was similarly based on forensic dental evidence—once again by Dr. West. On February 15, 2008, Brewer became the first person to be exonerated by post-conviction DNA testing and the same day, the Innocence Project won Brooks’s release from Mississippi State Penitentiary.

Armand came across an article about Brooks and Brewer in 2012. Moved and troubled by their cases, she reached out to the Innocence Project with the hope of documenting their everyday experiences. As such, she’s an outsider to their lives (and Mississippi), a fact that comes through in her book.

None of the portraits in Levon and Kennedy seem completely candid; in fact, most appear to be fairly posed, at times requested, or at the least consented to. Aware of a photographer’s presence, Armand’s subjects seem to emit a unique sense of pride and open vulnerability—a pride in their selves and their families, but also perhaps in that they are having their lives and their stories memorialized in some way.

In one sequence, Brooks’s brother and nephew sit side by side on a three-person couch with the left end unoccupied. On the wall behind them are carefully arranged framed mirrors surrounding a generic artwork depicting a vase of flowers; tucked into its frame are family photos. On the adjacent page is an almost identical photograph, most likely taken immediately after the first, but this one also includes Brooks and his sister. The pictures dramatize the interaction between the family and the photographer; it’s as if Brooks and his sister had entered the room right after the first picture was taken and someone encouraged them to get in the frame.

By photographing many of Brooks’s and Brewer’s family members, Armand makes visible just how wide the impact of incarceration is. Interwoven throughout the book are narratives from nieces, nephews, and grandchildren—a younger generation struggling with the tension of staying on the land they love near their family and moving away to a place that offers more opportunities, and hopefully, less discrimination. One photograph depicts Brooks’s hometown of Macon from a distance, across a small body of water. Tall, bare trees and a telephone poll emerge from the water, obstructing our view of the road downtown and the one-story buildings that line it. Beneath the photo is a quote from Victoria, Brooks’s niece: “I love being close to my family but I’m thinking about moving to Texas. There’s better jobs there. There’s nothing to do here and there’s prejudice. You realize it as you grow up. People don’t want to know you. Some people won’t even touch your hand in stores, they put the money on the counter. Maybe there’s hope. I was in a college town the other day and two white boys sat with us to have a conversation, that was cool.”

Despite the external pressures on their families, the portraits and testimonies of Brooks and Brewer convey hope, forgiveness, and a determination to let go of difficult memories. Relationships are central to the narrative of recovery. We see Brooks (who died of cancer this year) and his fiancée Dinah’s marriage ceremony in 2016. They celebrate the wedding at their café, which is housed in a small home they own together). “I just married the man I love and our life is great,” Dinah says in the accompanying caption, “but I would like to have a couple of acres and a little house where I can have some peace. Right here, we deal with violence, drug infestation, mental illness.”

A close-up shot of Brewer and his fiancée, Omelia, shows them smiling as he looks at the camera and she glances off to the side, her profile almost meeting the edge of his face. Out of focus in the background is their “favorite Sunday spot” at the Noxubee River Refuge.

In one of the only shots of Brooks with an open smile, he stands in the middle of the frame, looking directly at the camera. His hands, cupped open in front of his chest, barely reveal a baby chick poking its head up. There is a lightness to this photo—in the way he holds the small bird and in his gentle expression—and there is also an irony, when you consider the crime for which he was wrongly convicted.