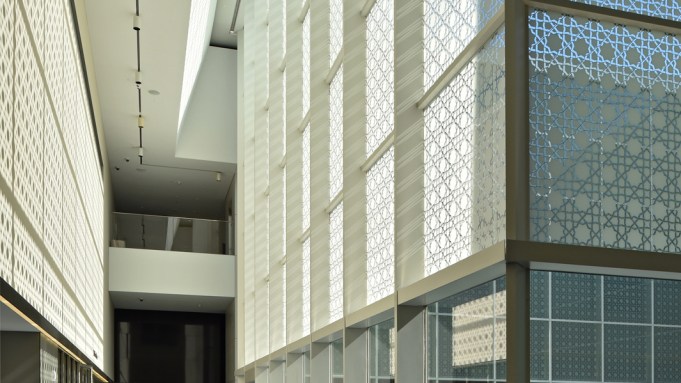 Amid a new and especially grisly rise of radical fundamentalism in the Middle East, the Aga Khan Development Network (AKDN) of the Ismaili community, one of the most progressive branches of the Shia Islam, has inaugurated a new Ismaili Center and a museum for Islamic art in Toronto–the first of its kind in North America. The new campus is designed to serve as a gateway into the historic and artistic tradition of Islam “at a time when such a gateway is profoundly needed,” explained Prince Amyn Aga Khan, one of the benefactors of the project, during the inauguration of the campus this fall. Architects Charles Correa, 84, and Pritzker Prize-winner Fumihiko Maki, 86, designed the center and the museum, respectively. Together they will serve over 100,000 Toronto-area Ismailis; the founders hope to attract over 250,000 visitors annually.

The patron of this $300-million project is the Aga Khan, Shah Karin Al Husseini, the 49th hereditary imam of over 15 million Shia Ismaili Muslims worldwide. The 77-year-old business magnate is amongst the world’s 10 wealthiest royals, although neither he nor his family rule over any geographic territory. Alongside his ventures in the luxury hospitality industry, he collects racehorses, yachts and private jets. The Swiss-born prince has also gotten involved with commissioning buildings; the Aga Khan Development Network (AKDN) has established Ismaili centers in Europe, Africa and North America, inaugurated a $1-million triennial award recognizing excellence in architecture in Muslim countries and societies, contributed to the conservation of historic Islamic architecture and, more recently, completed a building in Ottawa which serves as the de facto embassy for the Aga Khan. The greater part of the budget for all these operations comes from a 10 percent tithe paid by Ismailis worldwide.

The new campus is tucked into a business park in Toronto’s Don Valley, between busy highways and big-box stores. The unusual location was arrived at in 2002, after plans to build in London, across the Thames from Parliament, fell apart. From the highway, the campus seems like a hybrid of a fortress and an observatory, with solid limestone walls, peculiarly shaped volumes and pyramidlike structures that break through the roofs. Upon entering the premises, visitors are greeted by a large ceremonial garden, designed by the Lebanese landscape architect Vladimir Djurovic and inspired by the garden at the great mosque of Isfahan, Iran. The monolithic buildings along with the perfectly neat rows of trees and the black reflecting pools create a mysterious ensemble with many sophisticated, often perplexing, vistas.

Charles Correa first got involved in the AKDN’s work in 1998, when he received the Aga Khan’s award for architecture for the design of the Madhya Pradesh Legislative Assembly in India. His design for the 115,000-square-foot Ismaili Center was focused in the reinterpretation of traditional Muslim architecture, he told A.i.A. in an interview: “It’s an abstract expression of sacred geometry,” Correa said.

Although Maki won the Pritzker over 20 years ago, he seems busier than ever. His studio is designing a new office building for the United Nations, a new skyscraper at 4 World Trade Center in New York and a campus for the Aga Khan’s university in King’s Cross, London. The 124,000-square-foot Toronto museum, however, is not amongst his strongest works. While the exteriors introduce an interesting concept of self-shading prisms—some function as skylights—the interiors are dull. The large courtyard in the center of the building could have been sublime, but nothing inhabits it besides expensive marble tiles. The excitement from the Islamic geometrical patterns remains mostly in two-dimensional expressions, except for a grand heptagonal staircase that connects the two lobby areas of the auditorium.

The museum’s permanent collection comprises 1,000 objects, all from the Aga Khan’s holdings. It includes masterpieces of design, texture and artistry created over more than 1,400 years throughout the Muslim world. A large gallery on the ground floor is devoted to the collection, while a smaller second-floor space is given to contemporary Islamic art. Currently on view is “The Garden of Ideas: Contemporary Art from Pakistan” (through Jan. 18, 2015). The display was cleverly designed by Paris designer Adrien Gardère, who recently designed the Louvre’s outpost in Lens. He arranged an elegant display that allows viewing objects in their original spatial configuration: rugs are laid on a small podium on the floor, lamps and column capitals are elevated or hung from the ceiling. “It’s not the dark, gloomy gallery where an artifact floats in the darkness with one beam of light on it,” Gardère told A.i.A.

The center’s program the next few months includes film screenings, music and dance shows, artist residencies, workshops and conferences. “It’s an almost hyperactive program,” says Henri Kim, the museum’s director, who previously ran Oxford University’s Ashmolean museum. Upcoming exhibitions include “The Lost Dhow: A Discovery from the Maritime Silk Route,” which will feature the treasures of a ninth-century Arab shipwreck discovered in 1998 in the Indian Ocean (Dec. 13-Mar. 15).

Kim admits that the collection is not as vast as that of New York’s Metropolitan Museum of Art (12,000 objects) or the Louvre (about 17,500). However, the Aga Khan and other private donors in the Ismaili community guarantee the expansion of the collection, as well as the museum’s overall budget. Further exhibitions will emerge from formal collaboration agreements with the Hermitage in Saint Petersburg and the Museum of Islamic Arts in Doha, Qatar. “We don’t find institutions that are solely devoted to this subject matter,” says Kim. “We will lead the way.”