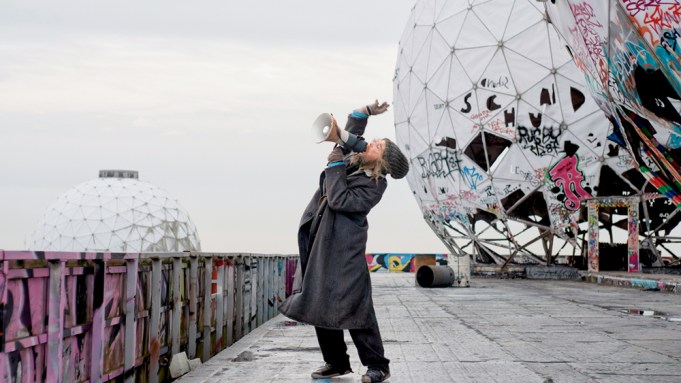 “In my glorious isolation, I am illuminated by the marvelous incandescence of my electrically charged nerves.” The words are those of Manuel Maples Arce: poet, critic, and founder of Stridentism, a 1920s movement that merged Mexican revolutionary politics with European avant-garde agitation. In German artist and filmmaker Julian Rosefeldt’s recent thirteen-channel video installation, Manifesto, the lines issue from the mouth of a British punk musician, who snarls Arce’s tract in between disaffected drags on her cigarette. The distinguished actor Cate Blanchett plays this defiant rock star, as well as an extraordinary array of other fictional characters. Whether as hard-bitten incineration plant worker or high-strung CEO, Blanchett recites passages from more than fifty twentieth-century manifestos. She does not declaim the texts so much as use them as scripts for personalities of the most wide-ranging sort, in thirteen vignettes of striking cinematographic richness. As her characters shift between creeds and declarations, accents and affects, Blanchett’s dramatic charisma appears more authoritative than ever. It challenges us to consider the fundamental nature of manifestos—and the motivations of their authors—then and now.

While the pairings between avant-garde philosophy and invented personage seem pertinent in several instances, in others they clash dramatically, even comically. With its hymns to speed and scorn for the past, for example, F.T. Marinetti’s “Founding and Manifesto of Futurism” finds a fitting spokesperson in Blanchett’s harried stockbroker, herself trading in proverbial futures. The actor’s incarnation as a puppeteer likewise matches well with the circumlocution of André Breton’s Surrealist manifesto, while the small marionette doppelgänger she holds evokes the movement’s penchant for uncanny mannequins and eerie doubles—to say nothing of Breton’s obsessive control of Surrealism’s doctrine and membership. By contrast, Claes Oldenburg’s proto-Pop text (“I am for an Art . . . ,” 1960)—which calls for a “political-erotical-mystical” aesthetics—takes on some odd inflections as read by a conservative Christian housewife at family dinner. Here, the disjunction between the manifesto’s origin and its imagined afterlife creates an amusing frisson.

Then again, with its poetic repetitions, Oldenburg’s text does not stray far from a prayer. Like so many modernist manifestos, it is a kind of incantation. As a bright-eyed newscaster, Blanchett mouths Sol LeWitt’s Conceptualist writing with an appropriately deadpan delivery. At one point, the anchor’s exchange with a reporter (also played by Blanchett) shifts into a high-pitched chant, turning LeWitt’s words into the liturgy of some strange religious ceremony. The manifesto format thus finds an unlikely resonance in a family united in collective prayer, or a telecaster’s poker-faced pronouncements. At the same time, the high seriousness of these modernist decrees—nearly all of them written by men—proves frequently amusing when transposed to contemporary contexts, conveyed now by a strong female speaker. In this regard, Rosefeldt’s Manifesto balances between earnestness and irony, solemnity and irreverence.

Public recitation was a vital aspect of avant-garde manifestos. The Italian Futurists declaimed their tracts at infamously raucous soirées, dodging vegetables hurled from the crowd and hectoring the public in turn. Before publishing his “Dada Manifesto 1918,” Tristan Tzara read the text aloud months earlier at a gathering in Zurich’s Salle Meise. The modernist manifesto’s performative dimension—its orality and physicality—is inscribed by the term itself. The word’s Latin origins—manus (hand) + festus (struck)—suggest a pugnacious effect, a kind of literary punch. Other applications of the term likewise conjure physical phenomena. In Italian, a manifesto is also a flyer or poster, while in various Romance languages manifestare/manifester/manifestar means not only to communicate but to demonstrate, to protest. Nonverbal phenomena—such as individual works of architecture or music or painting—are themselves often deemed manifestos of a particular style: a case of practice entailing its own theory, or an exception that aims to become the rule, an aesthetics by (unspoken) fiat. In short, the manifesto rarely remains confined to language. It espouses (and often successfully provokes) action, even at the moment of conception.

Already by 1918, this sense of utter conviction prompted Dadaist mockery. “To put out a manifesto,” Tzara wrote, “you must want: ABC to fulminate against 1, 2, 3 . . .” Parody was not yet (postmodernist) pastiche, however. The latter came to rule sovereign over aesthetics only in more recent years. (“Originality is Nonexistent” reads the cover of Manifesto’s brochure, quoting Jim Jarmusch in a higher mathematics of ironic unoriginality.) The unswerving authority of the manifesto—if not the entire genre itself—appeared to be a casualty of modernism’s postwar mutation into something less certain. In the wake of Jeff Koons and Mike Bidlo, in the shadow of Jacques Derrida and Jean-François Lyotard, transversal citations came to form the very stuff of aesthetic production and promotion. But, of late, advocates of identity politics have forcefully sought to reverse such reversals, restoring the sense of apodictic conviction that once infused manifesto writers and believers.

Cultural historian Boris Groys has remarked on the “chronically messianic” and “chronically apocalyptic” condition of the modernist avant-garde.1  This is in stark contrast to critic Fredric Jameson’s early 1990s contention that, with postmodernism, “the apocalyptic suddenly turns into the decorative.”2  The absolutism of the modernist manifesto was, at least temporarily, replaced by a sense of open-ended impermanence. (The planned obsolescence of our most cutting-edge technological products—each hyped as the moment’s definitive iteration—forms a piece with this latter tendency.) Sure, something of the manifesto’s syntheses lives on in Twitter’s obligatory concision. Yet such fragments form mere slivers in an infinite ambient prattle. By contrast, the modernist manifesto aimed to create a world unto itself. In the beginning was the Word: a totality of language, a language of totality, upon which could be nourished entire movements, ideologies, utopian futures.

Rosefeldt’s Manifesto memorializes those futures—both individually and collectively—as so many glorious, aural ruins. This past winter, the dim, yawning space of the Park Avenue Armory in New York provided an ideal venue for the outsize installation of thirteen hanging, glowing screens and their soundtracks. Positioned at various angles, the screens all had individual speakers positioned in front of them, keeping the accompanying sound relatively confined to each display. Each screen-speaker pairing offered an autonomous event, though the cavernous hall echoed with the ebb and flow of Blanchett’s various recitations. Each film plays on a continuous loop, and appears to unfurl in its own time. Yet at one arresting moment, all the screens simultaneously reveal Blanchett’s face in close-up, as she reaches a frantic fever pitch in her respective declamations. The individual works suddenly form a hectoring chorus.

The complexity and expense of Rosefeldt’s work perhaps implies its own parallel commentary on contemporary aesthetics. A large chunk of the exhibition brochure is dedicated to crediting costume designers and makeup artists, lighting specialists and aerial cinematographers, personal assistants and catering crews. The costs have born sumptuous, glistening fruit, and Rosefeldt’s direction elicits some extraordinary performances by Blanchett. Thus Manifesto is plainly, on one level, an example of the late capitalist spectacle that Guy Debord savages in his 1960 Situationist Manifesto—delivered by Blanchett as a disheveled homeless man, picking his way through the vestiges of what look like some abandoned Eastern European factory complex. As Debord rails against the “impasse of capitalism” and his latter-day reciter searches for scraps among the rubble of Communist industry, the irony comes fast and thick.

It is perhaps the fate of the individual manifesto to become obsolete. Yet, if it is to succeed at the moment of its issue, the text must pretend to a glorious permanence, an almost suicidal definitiveness. Does a manifesto by any other name pack the same punch? Both California Governor Jerry Brown and conservatives on Capitol Hill are said to have penned anti-Trump tracts. Clearly, the manifesto genre endures, even under different, less obvious guises.

But what of the classic form? It seems now to be waking anew. Entering the recent exhibition “Vanishing Points” at James Cohan Gallery in New York, one was confronted with a large wall text—visible from the street through the gallery’s glass doors—penned by a group of black women artists in the name of the Black Lives Matter movement. From its first-person plural pronouns to its declarative and “performative” locutions (“We believe . . . ,” “We work . . . ,” “We prioritize . . . ,”), the statement served as an opening salvo, verbalizing the esprit de corps with which the works had been made and assembled for view.

In response to Dana Schutz’s painting of Emmett Till, currently on view in the Whitney Biennial, the British artist Hannah Black circulated a letter and petition calling for the work’s removal and destruction. This text, too, partakes of tropes intrinsic to the manifesto, such as the anaphoric repetition at the end of various paragraphs: “The painting must go.” Finally, what began last fall as the exhibition “Decolonize This Place” at Artists Space has mutated into a ongoing collective action—mutating in both time and space—against gentrification, the occupation of Palestinian lands, an imperialistic Teddy Roosevelt statue in front of the American Museum of Natural History, and the Brooklyn Museum’s inclusion of real estate developers on its board. Both the physical and online forms of this movement meld pronouncement and practice, suggesting an assimilation of the manifesto to the very core of the project—its persistence not simply in name, but in and as action.

1. Boris Groys, “The Weak Universalism,” E-flux Journal, no. 15, Apr. 15, 2010, e-flux.com. Groys writes, “We almost automatically see everything that exists and everything that emerges from the perspective of its impending decline and disappearance.”