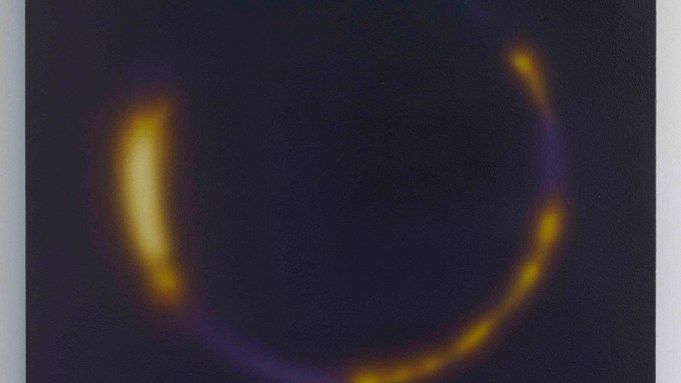 Re-examining the apocalyptic photorealistic paintings of Jack Goldstein in 2012, the opening salvo of Gravity’s Rainbow, Thomas Pynchon’s 1973 classic about the human drive for self-annihilation, springs to mind. “A screaming comes across the sky,” it begins. “It has happened before, but there is nothing to compare it to now.”

A cult artist loosely affiliated with the Pictures Generation but who suffered a drug habit and was always self-sabotaging, Goldstein, who died in 2003, has seen a posthumous resurgence among curators over the last two years. “Where is Jack Goldstein?,” a collection of 12 paintings and one film, at collector Adam Lindemann’s Upper East Side gallery, Venus Over Manhattan, follows a major exhibition at the Orange County Museum of Art earlier this summer—Goldstein’s first American retrospective. (The show was rescued from the Los Angeles Museum of Contemporary Art, which canceled a Goldstein retrospective planned for 2010 to make room for a Dennis Hopper exhibition.) “Jack Goldstein X 10,000” will open at the Jewish Museum on May 10.

“I think these are about a kind of existential nihilism, whether it’s through natural phenomena or man-made phenomena,” Lindemann said at a press preview at the gallery last week. “These are all things that are bigger than man.”

Etymologically, “annihilate” and “nihilism” share a root in nothingness: So do Goldstein’s high-contrast, noir-ish tableaux. They are an absence of belief, spiritual dislocation converted into destruction—what Jung would say occurs when humans lose their historical and psychological mooring in ritual and symbol. Yet, in their depictions of exploding cities, launching rockets, diving bomber planes, bursting suns, Goldstein’s paintings offer a new set of symbols, a new iconography to replace the old; nihilism is the new faith in his paintings.

That nihilism, as Lindemann notes, lies also in the absence of the artist’s hand. The paintings are photorealistic, but the word “painting” here is, itself, problematic-particularly in Goldstein’s day. These are stark, crisp paintings, appropriated from other people’s photographs, done in airbrush and with auto pinstriping tools atop black canvas. They are beautiful, but nothing like the photorealism of artists like Gerard Richter, which sheds its illusions (while revealing their dexterity) on close inspection. One can’t help but recall the roadside pop art of airbrushed, black velvet Elvis paintings.

“These were processes that he was proud that he pioneered so he felt very much like this is his style,” Lindemann says. “He wanted it flat. He didn’t want it to look like a painting. He didn’t want you to see a brushstroke.”

Goldstein’s career was as quick and brilliant as the bomb explosions and lightning flashes that illumine his dark canvases. He graduated from the California Institute of Art in 1972—just a year before Gravity’s Rainbow was published—a member of the school’s first graduating class. The “Sixties” were over; the Cold War was not. A new existential dilemma, nuclear self-annihilation, was on a lot of artist’s minds. So was Foucault’s 1969 injunction to “locate the space left empty by the author’s disappearance.”

Goldstein didn’t paint the canvases himself, Lindemann noted. As with his films (one of which, Shane (1975), a sort of screen test of a barking German Shepherd), Goldstein didn’t paint, he directed. The physical act of air-brushing was carried out by assistants. The surfaces are smooth and thin, difficult to distinguish from the photographic prints from which they were taken until examined at close range. In the early 80s, such techniques were anathema to the aggressive painterliness of artists like Jean-Michel Basquiat and Julian Schnabel.

“He said he wanted the image just ‘plain laid on,’ only white acrylic paint applied on top of set black,” explains artist Ashley Bickerton, who was Goldstein’s primary assistant for four years, in an essay he wrote for the book accompanying the show.  “‘That, he said, was the point of his work, direct, impersonal, like a single color silkscreen, just the found image represented coldly, but at the scale of monument.”

Death from above is the subject of most of Goldstein’s untitled paintings assembled here, painted between 1977 and 1984. Here’s a World War II bomber diving to the edge of the canvas; here’s the hot trail of smoke and ash left behind a launching rocket in the night sky; here’s the bombing of London, its skyline aflame. Their effect is particularly uncanny because the images have been magnified, yet depersonalized-indeed, somewhat sanitized-by way of Goldstein’s detached, clinical process.

And when humanity isn’t busy trying to destroy itself in these works, it is held captive and in thrall of the destructive power of nihilistic gods. In another untitled painting, we see the sun, giver of light and life, eclipsed by a cold, dead moon. In yet another, bolts of lightning tear across a cloudy, red-tinted sky, as though heaven and hell had met each other halfway.

Lindemann kept the gallery dark, lighting Goldstein’s works with spotlights, creating a somber, almost funereal atmosphere. It lets the darkness of the black-based canvases seep into and meld with its surroundings. Aside from the visual harmony it creates, Lindemann remembered an interview with Goldstein from 1985 that outlines a philosophical underpinning to his lighting scheme.

“Daytime to me is about total disappearance,” Goldstein said in the interview, eight years before he committed suicide. “Because there is an even light that floods everything out. But at night, one can light, and spotlight, you know. And so I see the nighttime as being where I can kind of come into my own, and the daytime is about my absence.”