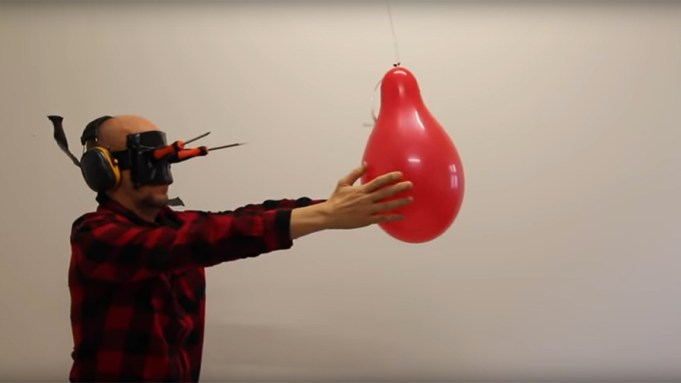 Every day in his Oslo studio, performance artist and sculptor Jan Hakon Erichsen records himself undertaking obtuse tasks of impotent violence and posts the results to Instagram, where he has more than half a million followers. Captured with a fixed-position smartphone, Erichsen’s short, no-frills videos recall the barebones, studio-as-set experiments that artists like Joan Jonas, John Baldessari, and Peter Campus made with Portapak video cameras in the 1960s and ‘70s. Erichsen’s own exercises begin in one of two awkward ways: the artist standing outfitted in some faux-fetish wearable cobbled together from everyday items, or activating a rickety contraption fashioned out of wood, hinges, and knives. Both approaches end in petty destruction: most often, colorful balloons are popped or uncooked spaghetti gets snapped, though recent videos diversify the objects of Erichsen’s ire, incorporating bananas, potted plants, taco shells, crackers, and mugs of coffee.

Erichsen frequently cross-posts these videos to his Twitter account and YouTube channel. In August he tweeted a two-minute balloon-berserker video compilation that has since been retweeted one hundred thousand times. This viral success exploded his already impressive follower counts across social platforms and netted him an interview with New York magazine. But Instagram is where Erichsen finds his most consistent, engaged audience. His videos average six-figure view counts. Every post gets hundreds, sometimes thousands, of comments: unending LMAOs, triple crying-laughing emojis, users tagging friends, and the occasional “I don’t get it.”

In September, celebrity YouTuber Felix Kjellberg, better known as PewDiePie, posted a video titled “Forbidden memes” for his subscribers, who number more than one hundred million. It’s a relatively tame example of the reaction-video genre. The Swedish social media star offers unremarkable commentary on viral videos. In the last minute, clips of Erichsen appear onscreen. “Oh my god, what?” he scoffs, watching Erichsen snapping dried spaghetti with his bald pate. “Why?” But a moment later, as Erichsen swings a saw to chop pasta from the bill of his ballcap, Kjellberg is sold. “Oh my god!” he exclaims. “That was amazing!” He utters an oft-heard, well-intentioned refrain from people who can appreciate contemporary art but aren’t apprised of its history: “How do you come up with these ideas?”

In a 2013 essay for the New Inquiry titled “The Accidental Audience,” artist Brad Troemel ruminates on what happens when internet users inadvertently encounter contemporary art on sites like Tumblr, where Troemel co-moderated the intentionally obtuse group art blog, the Jogging. Troemel identifies a trifecta of common responses: “WTF I don’t even?” (awkwardness); “You’re doing it wrong” (mistaken presumptions); and “My kid could do that!” (anger). In 2014 New York artist Wyatt Burns posted Untitled (100 Cigarettes) to Vimeo, a post-Burden studio video where he uses a blowtorch and an outrageous homemade machine to simultaneously smoke what the title implies. Picked up by Buzzfeed, Gizmodo, and other outlets, it went viral. Nearly every comment on the articles landed somewhere between the “You’re doing it wrong” and the “My kid could do that!” variety. One internet user, understanding the video as a performance but rejecting its artistic value, wrote: “I’m sick of so called ‘performance art’. Whether your [sic] nailing your balls to the ground or smoking 100 cigarettes, it’s not art, it’s mentally ill. This dude needs help, not people to watch him.”

Erichsen’s work certainly elicits all three types of internet audience responses defined by Troemel, though the majority lean toward the good-humored “WTF I don’t even?” I’m inclined to believe that this is because there’s nothing about Erichsen’s work that seems elitist, intellectualized, or overly avant-garde. This is fascinating, because Erichsen is no outsider artist, nor is he some internet-raised, Gen Z savant. He trained at the Norwegian National Academy of Fine Arts. Over the last fifteen years he has won several grants, participated in dozens of video festivals, and had solo and two-person exhibitions throughout Norway and beyond. He’s in his forties. He has two children. On paper, he’s about as likely a viral star as American glass guru Josiah McElheny.

So why the hell is he so popular?

Troemel’s “The Accidental Audience” quotes philosopher Boris Groys’s 2010 essay “The Weak Universalism”: “Popular art is made for a population consisting of spectators. Avant-garde art is made for a population consisting of artists.” Groys is referring to the irony that general audiences see avant-garde art as art that they themselves, or their kids, could produce, which makes it “weak,” democratic. But when the average person looks at, for example, a design by the very orderly but painfully pedantic Shepard Fairey, they perceive the work as labor-intensive and masterfully symmetrical, something they could never create, which makes it strong in their eyes.

Herein lies the fascinating paradox of Erichsen’s output. If the infinite WTFs are any indication, he’s cultivated a majority-spectator audience, nonartists on Instagram who get a kick out of what he posts. Yet numerous artists that I admire not only follow him, they like and comment on his videos. Perhaps what Erichsen has somehow managed to do is produce work that anybody’s handy, weirdo cousin could make but that nobody in their right mind would make. It’s an avant-garde populism, less salacious than “Jackass,” though still “Jackass”-adjacent. Central to “The Accidental Audience” was a rhetorical question Troemel had for artists themselves: “At what point do artists using social media stop making art for the idealized art world audience they want and start embracing the new audience they have?”