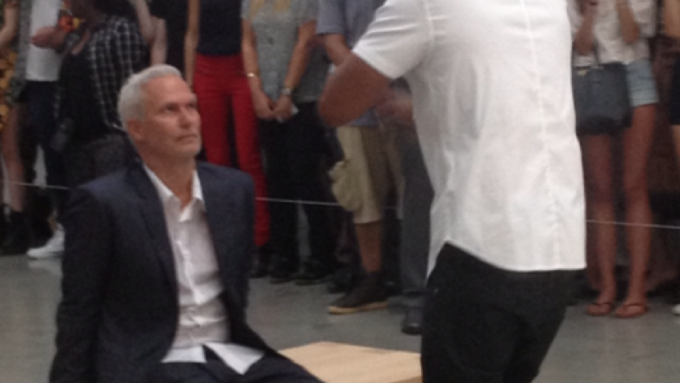 The gallery was stripped of art for the occasion, reducing it to the iconic white cube. Surrounded by six cameras, in slim-fitting white button-down shirt, black pants and a gold chain, the rapper performed the song repeatedly over the afternoon as different crowds of extras circulated through the gallery. Among the VIPs were Marina AbramoviÄ?, Klaus Biesenbach, Alanna Heiss, Glenn O’Brien, Jerry Saltz, Roberta Smith and Sarah Sze. Many of them were escorted by gray-suited actors playing security guards to sit on a bench, one or two at a time, and be serenaded.

The track proclaims the rapper’s desire for glitzy art along with other gratifications of the senses: “I just want a Picasso, in my casa / No, my castle / I’m a hassa, no I’m an asshole / I’m never satisfied, can’t knock my hustle / I want a Rothko, no I want a brothel.”

Other artists are called on to bolster the rapper’s status at the top of his field: “It ain’t hard to tell / I’m the new Jean-Michel / Surrounded by Warhols / My whole team ball.”

Jay-Z is not the only rapper to take an interest in art; Kanye West’s 2010 album My Beautiful Dark Twisted Fantasy featured cover art by George Condo. West hosted a listening party at Art Basel for his latest record, Yeezus, at which he performed and made extemporaneous remarks.

The rapper revealed a sense of humor between takes. At one point he was testing a microphone hidden in his shirt by tapping out a beat on his chest with his fingers. The crowd gamely clapped along, and in the quiet moment after he stopped, he shrugged and quipped, “I’m talented!”

Some art-world observers fretted that the event was meant as performance art. The line between artist and celebrity has been especially blurry in recent years, with performance artists like Marina AbramoviÄ? gaining celebrity status, and performers like James Franco and Tilda Swinton staking a claim as artists.