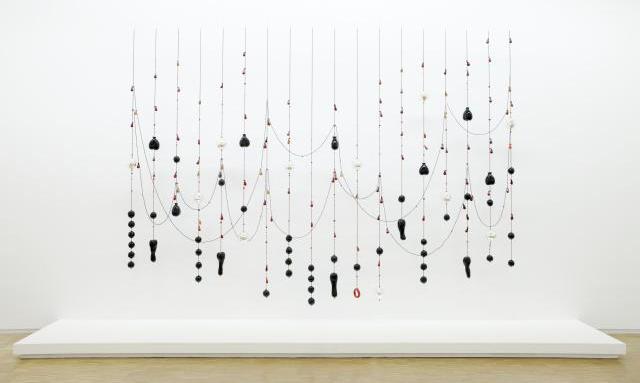 In “Jean Michel Othoniel: My Way,“ a mid-career retrospective at the Brooklyn Museum, the artist creates a singular world, where beauty and repulsion, poetry and politics, masculine and feminine are entwined. “It’s been a long journey over the past twenty-five years,” Othoniel told A.i.A. “I’ve always felt at the edge of the frame.”

Consisting of 67 works arranged chronologically, the show begins with Priest’s Robe (1986), a spotless linen sheath that Othoniel made after the death of a lover. He would wear the piece during performances early in his career. “The idea of the body was the main preoccupation at the end of the 1980s because people were really suffering,” he explained, speaking of the onset of AIDS early in the decade. “It was disturbing to have this desire for a person, to want to fall in love, but then for that person to be totally destroyed. When I left school École nationale supérieure d’arts de Paris-Cergy, we were just 6, all the others died.”

Othoniel has long pursued in his work the idea of hermaphroditism. “There is no direct connection to the male in my work,” he said. In his work, the feminine is manifested in the form of objects that reappear constantly-necklaces, breasts, fairytale princesses. Early in his career, he kept his hair long, and wore flowing gowns in public.

Many of Othoniel’s early works featured in the exhibition include large, human-sized necklaces such as Breast Necklace (1999), composed of tennis ball-sized white beads marked by tiny, pink nipples, and Tears (2003), a collection of glass bottles containing 1,000 small glass objects suspended in water that serve as a metaphor for the frustration of sexual desire, an object visible and seductive but out of reach. Glass, particularly as beads, are present in much of the artist’s best-known output, including the entrance he built in Paris to the Métro Palais-Royal-Musée du Louvre, a work that is represented by sketches in a small back gallery.

In the following room, Othoniel creates a sort of dreamscape using works from different parts of his career including My Bed (2003), an elaborate frame made from Murano glass, aluminum and felt that looks like a doll bed for a fairy princess; Rain of Gold (2002), a roughly 16-foot long, 40-foot wide cotton voile curtain sewn with mirrors of silk and gold by over 80 hand embroiderers. A number of small, overtly phallic Murano glass sculptures, first shown in 1997 at the Guggenheim in Venice, hang, like wind chimes in a garden, from the ceiling. “My idea really is to try to re-enchant the world,” says Othoniel.

The room signals Othoniel’s move over the last decade towards collaborative and commissioned production from skilled craftsmen. Says Othoniel. “Performances with dancers. Embroidery with groups of people. Glass blowers. I felt like a conductor in an opera. This is the way I love to work now. I can go bigger and bigger and make architectural spaces.” Precious Stonewall (2010), a massive, 13-foot-high hollow cube, is made of golden brown bricks of glass that were blown by craftsmen in Firozabad, India. The artist stayed in the desert region, which is close to Agra, the city where the Taj Mahal resides, for one month. “It was very difficult. There were no hotels, no restaurants, and no one spoke English,” said the artist. “They’re melting glass in the ground like they did 2,000 years ago. The work was inspired by the piles of bricks that lie along on the road in India, which people collect until they have enough to build their own house. “In that way, it’s a pile of energy, of hope,” he said.

With collaborators Othoniel has been able to reformulated early work, and manifest them larger. In the back room of the exhibition hang the resulting works, monumental glass bead sculptures that practically vibrate with energy. In Large Self-Tying Knot (2011), a tangle of beads are drawn up towards the ceiling, and suspended to a point six feet in the air, as if pulled vertical by a magnet. Viewers are invited to walk underneath Large Double Lacan’s Knot (2011), which hangs low in the center of the room, and looks like a Celtic pattern, or a thread of molecules writ large. In doing so, they begin to feel the scale of the monumental works in relation to their own bodies. “I took the idea of the necklace, and twisted it, turning it into a new form,” said Othoniel. “It’s more sculptural.”

Organized by the Centre Pompidou in Paris, this exhibition has already traveled to Seoul, Tokyo, and Macau. Brooklyn Museum is its final home. “This exhibition shows my DNA, where my work comes from, and where it has taken me,” said Othoniel. “You can feel my vision from the second you walk in the door.”