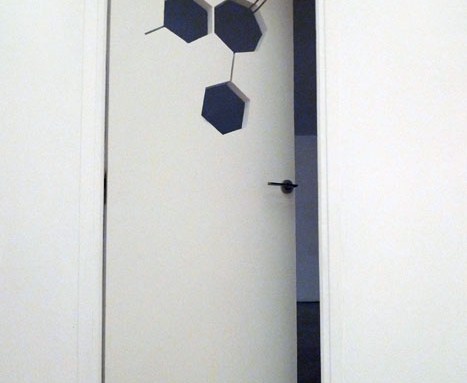 “Not every building is a dwelling,” wrote philosopher Martin Heidegger to suggest that if home is where the heart is, it doesn’t fit just anywhere. Dwelling and the often alienated response to architectural encasing is key in Jeanne Susplugas’ artwork, and core to her current solo how, “House to House,” at Le Wharf in Caen, France.

The daughter and granddaughter of pharmaceutical researchers, Susplugas’ entire oeuvre is based around medication, legal drugs, and what she calls “pill bulimia” a hypochondriac, frenetic consumption of medications that she identifies as prevalent in France. Medicine isn’t so much the subject as an entrypoint to anthropological inquiry. Medication, she says, “is a mirror of every society’s pains,” using the varied meanings of the word and the strategy to depict contemporary conditions of solitude.

Amidst the spacious art center, Suspluglas has built a series of little dark rooms with small doors. One enters like Alice penetrating Wonderland. Inside these chambers, the artist has fabricated small houses, which one can also enter. Next to these constructions sized like children’s playhouses, she has added various multi-media representations of therapeutic practices: photographs of drive-through pharmacies and close-ups of mouths swallowing pills, films of tweezers furiously plucking body hairs.

One enters the show by pushing a door covered in white leather (Door of Serenity, 2010), reminiscent of hospital interior, with the scientific formula for prescription anti-anxiety medication Lexomyl cut out.

The latter extraction is a window to the interior, where one can peak into a calm room, lit only by the fluorescent neon bulbs words “L’aspirine, c’est le champagne du matin” (2009) (Aspirin is the morning champagne) on the walls. “It’s an embodiment of calmness, the idea was to create an anti-depressant room,” says the artist, with a touch of sarcasm.

Adjacent she has built another room, with black walls, left entirely un-lit with one piece in the center. The Light Room (2009) is a cage made of tiny neon bulbs, which one enters—to great metaphoric significance—by opening and closing a gate. One is drawn to the light like the proverbial moth to flame, yet cut off from the rest of the room—reenacting as a bodily metaphor the disorienting brightness some drugs are described as inducing.

“My work is about addiction, pills and daily rituals, but ideas of the house goes hand in hand,” explains Susplugas. “In psychiatry, addiction is often described as a search for one’s house as a reassuring fantasy.” It’s for this reason that the small houses Susplugas builds are neither maquettes nor mansions nor monuments, but uninhabitable little houses, “neither human nor doll-size, but a fantasized image.” LEFT: DOOR OF SERENITY, 2010. PHOTO BY RAPHAEL PFEIFFE

Physical entrance into each of Suspluglas’ houses highlights the inversion that occurs when one swallows a pill: “It is the exterior coming into the interior, yet has a soothing effect,” says Susplugas. The artist creates a membrane on which interior and exterior can be as a simultaneous relation of intimacy and fear. The fearsome abject, which in art and theory typically has to do with the inside of the body, is never represented in Susplugas’ work, and the figure is generally entirely in absentia. It’s the viewer’s own orientation of their body that’s the stage.

The exhibition takes its name from a transportable, wooden house that the artist has built as a transport container but unfolds into a small habitation (2010). The work invokes that of Israeli artist Absalon (1964–1993), who, after being diagnosed with Aids in the early 90s began building small houses he called “cellules,”  each about nine square meters, in which he recorded his contrived movements, thus using the analogy of the house to express feelings of anger and bodily betrayal.

In the cases of both artists, the house is a place of intimacy and a site marking both confinement and deception. Yet Susplugas’ houses don’t convey panic or impersonate a single disease, so much as draw out the potentially limiting, potentially liberating set of constraints native to any condition.

HOUSE TO HOUSE IS ON VIEW THROUGH MAY 29.

The Maserati MC20 in Photos