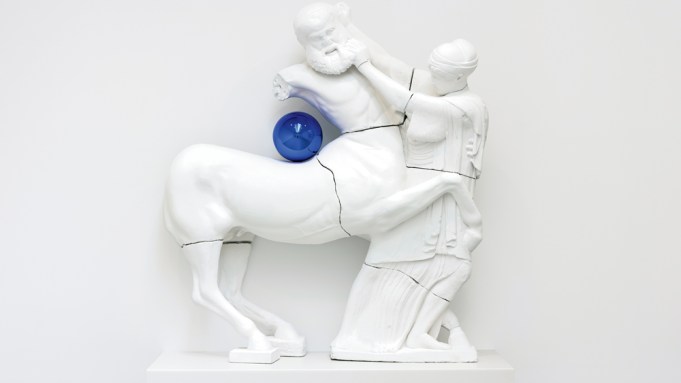 What inspires me is feeling. I’m talking about a sense of excitement, of awe and wonder. As a child, you have a kind of openness. As you grow, that openness turns to sexual excitement, toward an expansion of parameters and territory, possibilities and sensations—a wider range of feeling. Mark and edge, textures and colors, are tools that help communicate those sensations, that lay the aesthetic groundwork. But it’s all about transcendence, about having greater experiences than the ones you had before, about creating a vaster life.

When I make a work, it’s because I myself enjoy the heightened sensation. But I would like to be able to affect the sensations that viewers have. They might feel something similar, though I realize that art has a different effect inside them, that it’s about increasing their parameters, their interests, their desires. What’s objective, what’s shared—in a way I’m rejoicing in that, though I know there are going to be things that are completely unpredictable. Just as I experience my own possibility, and want more, I would hope that viewers also experience their own possibilities, and want more.

I grew up in Pennsylvania. My father was an interior decorator. He taught me about aesthetics, colors, textures: things that affect the way you feel. As a socially mobile family we had a wide range of experiences. Still, I never spent a lot of time in art museums, apart from some visits to the Philadelphia Museum of Art with my aunt. When you’re young, art is just something you can do. I really didn’t become aware of art’s power to unite all the different disciplines until I was in college—the first day of college, more or less. I had a real art history course, and there I realized that art was referencing philosophy and sociology and physics and aesthetics—all the disciplines, effortlessly connected.

I vividly remember surviving my first day of art school, at the Maryland Institute College of Art. We went to the Baltimore Museum of Art. I saw works by Cézanne and Braque, and I didn’t know who they were. I would have known Dalí and Picasso, I would have heard the name Matisse, but I didn’t know about the Cone Collection. I felt like I survived that moment. And I don’t think a lot of people do. They can feel like they’re not prepared. Trying out for a sports team: if you’re not already at a certain level, you’re not going to make it. But art doesn’t work that way.

I always try to make a work that will help people survive that first moment. So that, when they come into contact with art, it will be about their own history, their own potential. There’s no experience or information that’s pre-required of them—the work is accessible. There can be different levels—one person can experience transcendence, and another person can experience an even greater level of transcendence, more mind-blowing, because they are able to make more connections. But that doesn’t make a first encounter less valid or exciting or relevant. In the art history class, I started to see how art was not just about emulating or duplicating reality—an aspect of skill—but about being able to connect to different areas in life. Here was the chance to participate in a dialogue about what it means to be alive, to be interacting with your community, your whole society. It was amazing. I felt really lucky.

When I was a kid, my grandparents had an ashtray on a table in their television room. It was a small porcelain of a girl in a bathtub. It was white, with pink and blue details, and the legs went back and forth. As a kid, I was mesmerized. My Woman in Tub [1988] comes from that, though it also references Manet and Degas. I had such an experience of awe looking at that object. You can’t say that Michelangelo’s Pietà would have been more relevant to me, at least at that time in my life. With works like Woman in Tub, I was trying to get people to embrace their own histories—to show them that those histories are perfect enough.

Everyday life has always been very inspirational for me. Today I have a family—my wife, Justine, and a total of eight children ranging in age from 38 to just one and a half. I try to create opportunities for them, emulating very much the way I lived as a child. My aunt used to take me up into the clock tower of City Hall, in Philadelphia, which is topped by William Penn, the bronze sculpture by Alexander Calder’s grandfather [Alexander Milne Calder]. I took my own children inside the tower, to the base of the sculpture, because it’s a very powerful, moving experience—the architecture, the portholes, looking out when you’re on top. But we also do purely physical things, like snowboarding. The idea is to give the children opportunities, a vaster sense of life.

The first time I worked with mirror imagery was in the late ’70s. I made inflatable flower pieces, and I would set those, and the rabbit pieces, before a mirror. They came out of the tradition of Smithson. I returned to the reflective surface in the “Luxury & Degradation” series [1986]. I liked the intoxicating quality of the reflection, the kind of distortion it would create. In the “Equilibrium” series [1985], the reflectiveness happened through optics, the effect of looking through the water. In a reflective surface, your existence is being affirmed. When you move, your abstracted reflection changes. The experience is dependent upon you; it lets you know that art is happening inside of you.

I remember being fascinated by gazing balls in people’s yards, around where I grew up. Reflecting in 360 degrees, the gazing ball affirms your existence, and it affirms location, a specific place. When I work with it as a medium, I am able to take it much further, to travel from the senses to the internal, to thought and feeling. For the “Gazing Ball” pieces, we cast sculptures from different museums in Paris, Berlin and Munich, on which I then nestled the gazing balls. In them you get a heightening of the senses, an affirmation of yourself, and, since the sculpture itself is reflected, it, too, becomes affirmed. The reflections fall into shadow, and you go back through Nietzsche to Plato, to the idea of the mother mold, that everything is a copy of pure form and ideas. On and on, to the eternal. The balls become everything.

In the “Gazing Ball” series, and others, you get a variety of voices. There’s a snowman, which is one kind of voice, but also Silenus and the baby Dionysus, Aphrodite—a whole community in dialogue. The artistic family: paralleling that family is my own—my wife, my children. That is what inspires me.

Coming to an understanding of the humanities, of aesthetics and the environment, and bringing those things together, you begin to imagine your possibilities. You feel a shift of intensity; you transform. I like to think of art history as putting a needle through kernels of popcorn and stringing them together. That threading mirrors human biology, the way chains of DNA connect—the truest narrative. In philosophy, I love Plato, Kierkegaard, Nietzsche; in art, Picasso, Manet, going back through time, on and on—Velázquez, ancient statues, the Paleolithic artists—all united and tied together in defining what it means to be human.   —As told to Faye Hirsch

JEFF KOONS is an artist living in New York.

Caroline Polachek Wants You to Feel Something