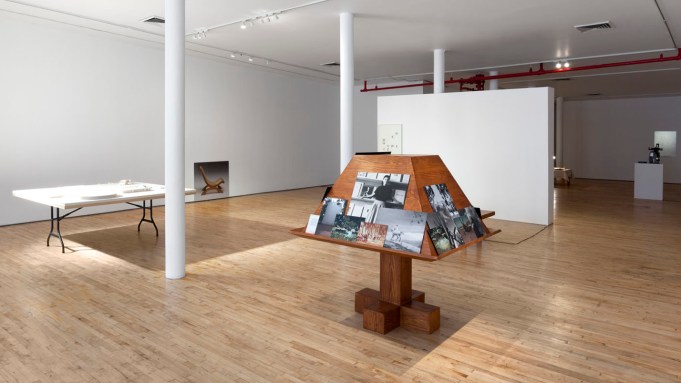 “Please. Try to make yourself understood by me even when you know that our views on life are completely opposite.” This request, posed by Jill Magid to an enigmatic “dear Federica,” articulates the crux of the artist’s half-hour performance, Woman With Sombrero, Women With Sombrero, presented at the New York nonprofit Art in General last Thursday as part of the performance-art biennial Performa 13, alongside the exhibition “Woman With Sombrero” (through Dec. 21). Magid’s performance drew a parallel between frustrated romantic desire and competing claims to an artist’s legacy.

The show centers on the New York-based artist’s ongoing investigation into Pritzker Prize-winning Mexican architect Luis Barragán (1902-1988). Barragán’s professional records, which include the copyrights to and images of many of his works, reside near Basel, Switzerland, where they are controlled by architecture historian Federica Zanco and her husband, Rolf Fehlbaum, founder of the Swiss design firm Vitra, which holds the documents under its corporate name. Taken out of their national context and separated from Barragán’s personal archive, which is held by the Fundación de Arquitectura Tapatía Luis Barragán at the Casa Luis Barragán in Mexico City, the architect’s professional records are accessible only with Zanco’s permission. The show and performance explore the implications of a corporation owning an artist’s legacy, a concern that prompts Magid to explore the boundaries of copyright law and public personhood, testing how intimate she can become with the elusive figure of Barragán.

While the Fundación readily opened Barragán’s private life to Magid’s research, Zanco denied her request to visit his professional archives. In the exhibition, Magid weaves a romantic narrative that presents Barragán’s copyrighted works and the controlling Zanco as lovers in relation to whom she stands as a jealous third. Magid tests the bounds of copyright law with sculptural objects and images in the show that closely mimic the copyrighted originals. For example, Magid blows up a photograph of a Vitra chair to a life-size print. She offers a series of pages from Zanco’s 2001 publication on Barragán, The Quiet Revolution, with some of the content obscured, as if to avoid copyright infringement. In a drawing, Magid outlines Vitra’s copyrighted version of the Futura font with its generic equivalent to create a new form out of the blended typefaces.

During the performance, Magid sat illuminated by a slideshow projection of images from Barragán’s personal photographic collection, including both images he captured and those collected from books and magazines­. Women reclining on the beach, poised on horses, and throwing their heads back in laughter flickered over the artist as she inserted herself as an image into Barragán’s personal collection. Redirecting her desire for Barragán onto its obstruction, Zanco, Magid quotes a love letter written by the architect to an unidentified woman, addressing it to “dear Federica.” Signing off as “Jill,” Magid wields Barragán’s language as her own.

In the performance, Magid asked Federica to send portraits of herself in various poses, from Lolita-esque schoolgirl to rebellious tomboy to Lauren Bacall-style glamour queen, inspired by images of women captured in Barragán’s archive. One solicitation exemplifying Magid’s meld of fiction, intimacy and power requested a portrait of Federica “standing before your library, with your back pressed up against the bookshelves.”

The performance shifted from literary romance to crisp legalese as a nondescript, strait-laced male performer entered, playing Magid’s lawyer. In a conversation, Magid probed the limits of copyright infringement-the lawyer instructed Jill in the nuances of the fair use clause (which allows a certain amount of copying), and she playfully prodded, asking, “Is performance fair use?”

He exited, only to return as “Juán” from the Fundación, who eloquently lamented the cultural neutrality Vitra imposed on the architect’s legacy by dropping the “á” from the Barragan Foundation’s name. The performer’s voice was tinged with a sense of injustice as he explained that visitors to the Casa Luis Barragán cannot even snap a picture of his home without Vitra’s permission.

The obsessive desire that drives Zanco’s protection of Barragán’s archive and Magid’s own fanatical hunt are understandable in their own ways. The complexity of competing claims to Barragán’s legacy instigates the sort of close investigation that forms Magid’s artistic practice. Woman With Sombrero draws out the pleasures of appropriation and alteration within legally sanctioned lines, holding the original and copy, intimacy and desire’s distant object, in unconsummated suspension.