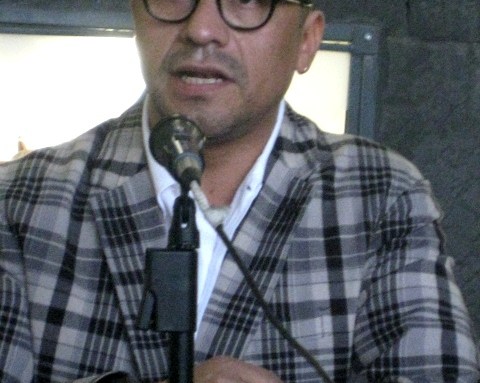 Artist Jimmie Durham once created a collaborative sculpture with Gabriel Orozco that established a tone of sacrifice and renewal which would continue in Durham work. It was years ago, in New York, and the work involved a bag of buttons and a few of Durham’s own teeth, which had been removed. The use of his teeth set a precedent for the artist, who said, “Every time I lost a tooth, I made a work of art, using it so I could pay the dentist.”

Durham, who lived in Cuernavaca, Mexico, from 1987 to 1994, told A.i.A. that he met Gabriel Orozco there. They’ve subsequently become close friends. At lunch, Durham and Orozco, along with artist Abraham Cruzvillegas, discussed  Durham’s book, navigating the three languages—Nahuatl (the language of the Aztecs), Spanish and English—of the publication. Much of the book’s writings and imagery derive from Durham’s project “Obsidiana,” A result of an immersive study into the history of Mexican stone, the project used obsidian as a metaphor for sedimentation as a type of impure formation. It was presented in 2009 at the kurimanzutto gallery.

The event took place at Diego Rivera’s Anahuacalli Museum in southern Mexico City. Guests were invited to tour the black volcanic stone museum that Rivera conceived with architect Juan O’Gorman to house the muralist’s vast collection of ancient Aztec, Toltec, Mayan and Teotihuacan relics. Blanton Museum curator Ursula Davila-Villa described the discussion to A.i.A., “Most of the conversation revolved around volcanic stones as materials, which were visible throughout the complex and the building’s architecture,”

The 71-year-old Durham added that each night he deposits his teeth-which are peppered with gold-at his bedside. Archeology for Durham, it appears, has overtaken the man.