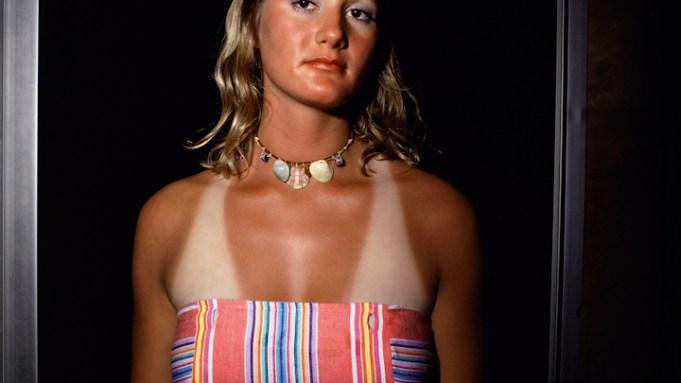 Flocks of blonde, tanned and bathing suit-clad teenagers whisper, drive and swim through the summer night in Joel Sternfeld’s “First Pictures” at Luhring Augustine Gallery in Chelsea [through Feb. 4]. Sternfeld’s photographs present a world steeped in the color palette of the Kodachrome and dye-transfer 1970s, as the orange platform shoes are matched by gold chains on hairy chests and the neighborhood boys cling to posters of Farrah Fawcett.

“First Pictures” comprises four historic series. The mostly unseen photographs follow Sternfeld’s early exploration in visual narrative and experimentation with color. Sternfeld, a mentor of mine for many years, sat down with A.i.A. in his Manhattan studio and talked about how he builds narrative through the use of color, the emotional and aesthetic tone of the 1970s and 80s, and his years creating the work for “First Pictures.”

The photographs in Sternfeld’s “Nags Head, 1975” series captures beachgoers of all ages, together for a summer on the Outer Banks of North Carolina. A surfer’s calendar records every day’s wave quality from “ridable” to “pitifull”[sic] (Nags Head, North Carolina, (#34), June-August 1975) and a police officer questions a shirtless man the day after a party (Nags Head, North Carolina, (#29), June-August 1975). “One of the reasons I chose Nags Head was because it was sort of floating in time,” says the artist.

The lime green dress of a blond woman rivals the yellow of a cab whizzing by in New York City, (#1), 1976. As part of the “Rush Hour” series, Sternfeld photographed people hurrying through the streets of New York and Chicago. The uneasy cultural climate of the Vietnam War and Watergate is described by two men in almost identical powder blue suits, passing each other in the darkness (Chicago, July/August, (#2), 1976) and another photo of a man in plaid pants who carries a brown suitcase and only four beers left in his six-pack of Budweiser (Location Unknown, (#1), 1976).

In “At the Mall, New Jersey 1980,” Sternfeld’s candid portraits of mall-goers and their purchases can be seen as a precursor to his 2001 body of work, “Stranger Passing.” Sternfeld’s mall pictures make almost-unbelievable visual jokes, often through repetition of a color or objects. In New Jersey, (#21), May/June 1980, a man’s toupee matches not only his small dog, but the identical wigs that surround him. But his is in good company; hung to his left is a beefy man in a skin tight white v-neck holding a tiny mint chocolate-chip ice cream cone (New Jersey, (#32), May/June 1980) and to his right, a young couple look grimly at the camera, holding an almost-identical dot-matrix ASCII printout of themselves (New Jersey, (#1), May/June 1980).

At first glance, the series is in the gallery’s back room looks disparate. Rather than being tied together through location, each photograph in “Happy Anniversary Sweetie Face!” contains its own narrative driven by Sternfeld’s rapt attention to the interaction of color.  Looking at the photograph of a boy dressed in all red, bending over for a drink of water in a red-rugged lobby (Location Unknown, 1976), Sternfeld explains: “There are three different reds, and you can study them. Are they matching? Are they not? And you can get lost in that and then you come back to the boy at the water fountain.”

In Washington D.C., August 1974, a proud woman wears turquoise sunglasses as she sails by with her husband in their brand-new turquoise convertible. It would have been impossible to convey the visual joke of a woman buying a pair of sunglasses to match her car in a black and white picture. “Black and white is abstract; color is not. Looking at a black and white photograph, you are already looking at a strange world,” says Sternfeld. “Color is the real world. The job of the color photographer is to provide some level of abstraction that can take the image out of the daily.”

Unlike the towering photographs in Sternfeld’s last show at this gallery, “Oxbow Archive,” the images in “First Pictures” are printed small (8½ x 12¾), giving them an intimate, snapshot feeling. “I wanted them very sharp, I didn’t want [the viewer] to be too conscious of the print,” says Sternfeld. “I wanted [the prints] to feel like the material, like Kodachrome.”

The show ends with the sand-swept landscape of Rockaway Beach in New York City (Rockaway Beach, New York City, (#2), August 1975). Here, where Sternfeld spent his youth, trashcans punctuate the melancholic tableau. The horizon is crammed with new condominiums. “The whole scene looked so ugly to me,” says the artist. “Then I realized this real unity in the moment when something transcends its content and becomes beautiful. And then . . .  it’s ugly apartment houses again. But for a moment, it’s something glorious.”