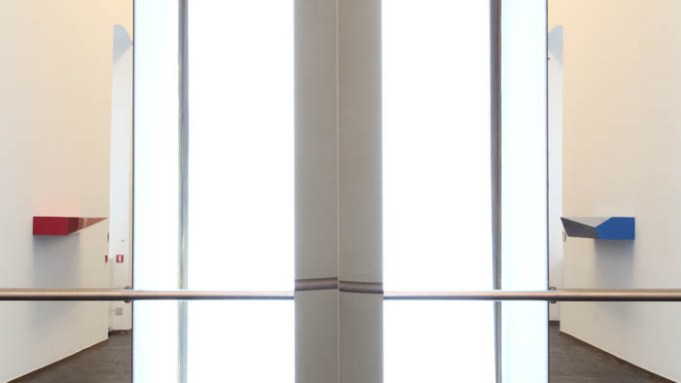 John McCracken (1934–2011), who died last April, has received a rare career survey in a stupendous setting, at the Castelli di Rivoli Museo d’Arte Contemporanea, outside Turin. Installed in the museum’s sweeping Manica Lunga (“long sleeve”) space, the exhibition includes nearly 50 works, some never shown before, which are sampled from every stage of McCracken’s 45-year career. This includes the decade from the mid-70s to mid-80s, when he virtually disappeared from the art world.

Present are a number of “Planks,” McCracken’s signature rectangular monoliths, in a range of colors, usually monochromatic. (There are also several multicolored “Planks” here, with eddying swirls; they are more psychedelic in effect.) McCracken created these works by covering rectangular wooden boards with fiberglass and resin that he meticulously sanded to a fine finish; he began making them in 1966 and continued doing so for the rest of his career. Neither painting nor sculpture, each feels utterly unique, and strangely solitary.

Apart from the “Planks,” the exhibition includes brightly colored tabletop pyramids, spectral mirrored monoliths, a generous group of early cubes on pedestals, and several notched, bi-colored sculptures. Two important early works, Yellow Pyramid, a ziggurat-shaped sculpture, and the blue Post and Lintel, shaped like a tall doorway (both 1965), show the artist’s break from painting, and his newfound interest in primary architectural forms. The show also includes paintings. Among these are his first exhibited works, from the early ’60s—colorful geometric abstractions and signlike compositions—and later mandala-like paintings, among the never-before-exhibited examples from the early ’70s. One wonders, from their rather tremulous execution, if the artist was completely on his game when making them.

McCracken’s belief in extraterrestrials set him apart from Minimalist rationalists, and while his love of custom-colored cars corresponded to a predilection in Minimalism’s West Coast variant movement, “finish fetish,” he avoided that label. As many have observed, the “Planks,” with their unearthly colors and luminous sheen, can indeed appear as if they have materialized from another dimension. Truly a West Coast artist, McCracken was born in Berkeley, spent much time in Los Angeles, and lived his later years in Santa Fe.

A particularly impressive work consisting of eight post-like “Planks,” each a different color, titled Cosmos (2008), has just been acquired by the Castello.

The show is accompanied by a comprehensive catalogue, edited by the curator, Andrea Bellini (who is co-director of the Castello), and Marianna Vecellio, assistant curator.  The latter’s valuable chronology includes reviews, articles and essays reprinted from a variety of publications, ranging over some 40 years. There are also contributions by others, including a fascinating conversation between the artist John Armleder and Daniel Baumann, Swiss art historian and critic, who are clearly, from their many striking insights, longstanding McCracken fans.

The exhibition will unfortunately not travel, and closes June 19. But for those leaving Venice for points elsewhere in Europe, a stop at the Castello is well worth the detour. In addition to the McCracken exhibition, the museum is showing “Everything is Connected 2,” a group exhibition curated by Beatrice Merz, which includes Allora and Calzadilla’s  Stop, Repair, Prepare: Variations on Ode to Joy for a Prepared Piano (2008), which New Yorkers might recall from its memorable iteration at MoMA’s mezzanine in 2010–11. Until this Sunday, June 12, it will be performed daily by the extraordinary pianist Amir Khosrowpour, who plays (backwards, from within the piano) Franz Liszt’s challenging transcription of  Beethoven’s Ninth, while physically traversing an elegant 18th-century sala. Other artists in the show, on view until Sept. 18, are Elisabetta Benassi, Goshka Macuga, Anna Maria Maiolino and Katerina Sedá.

London’s Hotel Ranks Set to Be Disrupted in 2022