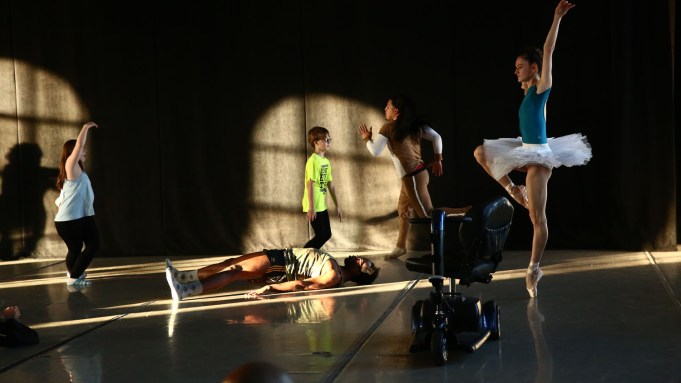 Jérôme Bel’s Ballet (New York) is a cute little piece. For his Performa 15 commission, the French conceptual choreographer cast 13 dancers and asked them to interpret a handful of genres, which were announced on a sandwich board placed on an otherwise prop-free stage. (I use “stage” by convention; the performances were hosted at Marian Goodman Gallery and Martha Graham Studio over two weekends, and I imagine conditions will be similar for the final show at El Museo del Barrio on Nov. 19.) Wearing costumes found in their own closets, the dancers first responded individually to “Ballet”—twirling to a saccharine passage from Chopin’s Les Sylphides, then doing a grand jeté to the bright Spanish dance from the finale of Minkus’s Don Quixote—then paired up for the “Waltz,” to Strauss’s Blue Danube. Following five minutes of silent improvisation, they did the moonwalk to Michael Jackson’s “Billie Jean” one by one, before a final bow. The whole thing took less than half an hour.

Bel chose his dancers to represent a range of body types, skill levels and abilities. Two possess the grace and expertise that come with years of ballet training (one is a soloist at the New York City Ballet) and own appropriate gear—the woman wore a tutu and pointe shoes; the man was in shimmering tights. A third moved like a professional in contemporary dance, and her full figure was wrapped in a striking black-and-white harlequin catsuit. The rest are untrained. A little boy and an old man flounced around with sheepish smiles, apologetic but unrepentant about their poor moves. There was a girl with a bad foot who grinned through her limp, and another in a motorized wheelchair who wore a solemn expression as she replaced pirouettes and turns of the waltz with her cart’s wide loops. Twins with thickset, muscular bodies and long black hair performed impressive gymnastic poses during the free improvisation, but did the dance moves with a clumsy shyness. A gangly, hairy, fey-mannered man, an awkward average Joe in glasses, a cheery woman with Down Syndrome, and a girl with downcast eyes and forgettably boring dance moves filled out the cast.

The glib anything-goes approach to choreography and skill wasn’t a surprise to Bel’s fans. In The Show Must Go On (2001), he had 20 amateur dancers act out pop song lyrics. In Disabled Theater, presented at New York Live Arts during Performa 13 after being performed at several European venues (including Documenta 13 in 2012), Bel engaged developmentally disabled actors who ordinarily perform fairy tale plays at Zurich’s Theater HORA, asking them to talk about themselves and choreograph dances to songs of their choosing. Bel, once a professional dancer himself, rejects the conventions and artifice celebrated by the theater, which are hidden by the apparent effortlessness of a virtuosic dancer’s execution. He’s more interested in the authentic experience of bodies exerting themselves in response to sound, the sort of dance that people do when no one is watching, and so he tries to re-create that experience in theaters, where everyone is watching.

Ballet (New York) might be thought of as a series of duets pairing genres with people. Generic parameters are set, and bodies of varying kinds do what they can to fit within them. Beginning with ballet, the most regimented and complex genre, the piece moves on to popular dances—the waltz and the moonwalk, steps that can be learned, practiced and replicated without the intense training and precision required by ballet—with an improvised interlude where the bodies could do as they pleased (during this part I mostly watched the woman who got out of her wheelchair and walked on all fours, her rear end swaying high in the air as her torso swung suspended from her rubbery spine). Ballet (New York) is a reminder that any genre is a collective experience of form adjusted by an individual experience of embodiment—from the nervous spasm of a little boy mimicking a balletic leap, to the showy joke of a ballerina moonwalking en pointe.

It’s a fairly simple concept, and Bel’s communication of it was less elaborate here than it was in his earlier works. Not much work was done in preparation; after the performance at Marian Goodman, I shared an elevator with the twins, who told me there had only been two rehearsals before the show. I want to be generous and think of Ballet (New York) as the work of a mature artist finding the most laconic expression for a long-term pursuit. But I also suspect there weren’t resources to do more.

I lean toward the latter interpretation because of the context of Performa 15, which is lackluster in comparison to previous iterations of the biennial. The curatorial staff is half the size of Performa 13’s. There are just as many commissions, but none are as ambitious as Ryan McNamara’s ME3M: A Story Ballet about the Internet—like Bel’s new commission, an exploration of dance’s genres and vernaculars, though on a much more spectacular scale—or Alexandre Singh’s Humans, a three-hour philosophical musical comedy, both of which were shown at Performa’s last edition. There were also big and unforgettable pieces at Performa 11: Liz Magic Laser’s multimedia play I Feel Your Pain, scripted with quotes from political speeches, and Ragnar Kjartansson’s Bliss, a two-minute aria from Mozart’s Marriage of Figaro performed on a loop for 12 hours.

Performa didn’t partner with recognized performance venues like the Kitchen and Abrons Arts Center this time, and the biennial features some bare-bones programming. For one of the commissions, Ryan Gander approaches audience members at other artists’ performances to hawk trinkets and tell the stories behind them. Heather Phillipson’s busy installation at A+E Studios downtown was used as a stage for a series of poetry readings—new territory for the performance biennial, and far less costly than dance. As endearing and concise as Ballet (New York) is, the meager company of Performa 15 ultimately makes it seem phoned in. Bel’s art may have gained the light touch of wisdom, but as Performa matures as an institution it needs to balance that lightness with vigor.