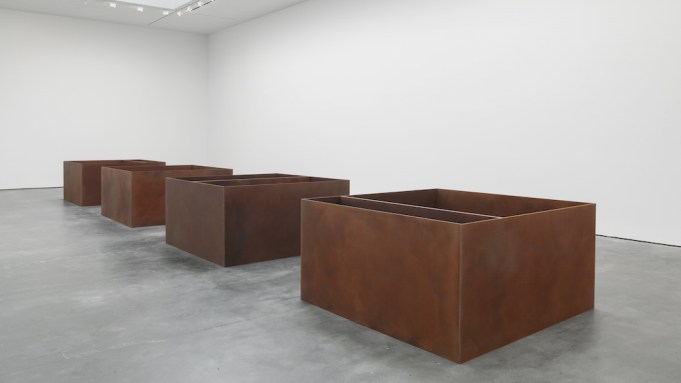 Donald Judd (1928-1994), the man and the artist, was not prone to change. “He refused to have a sense of time,” says Flavin Judd, son of “Don,” as he calls his father. However, Flavin, who is co-president of the Judd Foundation, might be proving himself wrong in the latest exhibition he curated of the Minimalist master’s late-career sculptures at David Zwirner’s 20th Street gallery (through Saturday, Dec. 19). The show is posited as a departure of sorts.

Fear not—no secretive glittery paintings nor operatic librettos were unearthed in some dusty closet. Rather, this grouping of 10 sculptures were among Judd’s constructions in the material Cor-ten steel that he made late in life. Many of these works haven’t been seen together or at all since their last showing as a group in 1989. “It helps declassify Don when you have shows of work that haven’t been seen in a while, because people realize they themselves have rather simplistic notions,” adds Flavin. “There isn’t an evolution.” Indeed Judd was a boundary-rupturing artist who dismissed the hierarchy of materials. And so seeing his recognizable freestanding forms and wall-mounted stacks rendered in steel, rather than the shiny enamel-and-aluminum most associated with the artist’s early works, is unsurprising.

Most of the works in the show were created between 1987 and 1991, but a large untitled piece of six 4-by-10-by-13-foot freestanding modular rectangles (currently owned by Marty Margulies) was made in 1979, and is one of his first completed works in Cor-ten.

While the metal alloy is the preferred substance of Judd’s good friend Richard Serra, it wasn’t peer pressure or persuasion that got him interested in the material. In fact, Judd once imparted that he refrained from using Cor-ten because it was “Richard’s material,” adding, “but then I realized it was just a material, and how I would use it would be different from how Richard used it.” Don’t forget that Judd, too, had dabbled in warm, velvety rust-colored steel before for a few select outdoor and site-specific sculptures in places like the The Hague’s Gemeentemuseum and the Museum of Modern Art, Shiga. “It’s a reminder of the consistency of the work, the variation of the playfulness in that consistency,” says Flavin.

Judd’s practice was concerned, throughout his entire career, with the singular form of objecthood, and the artist’s unwavering ideology often frustrated critics. By 1988, when the sculptor was producing many of his works in Cor-ten, Judd had been working and living in the tiny West Texas town of Marfa, Texas for 15 years. That year, however, he decided to branch out and buy an abandoned, out-of-commission ice factory. His new workshop, which he dubbed El Taller Chihuahuense, became a physical and mental space to explore the steel in ways neither he, nor others working with the material, had done before. Cor-ten sculptures, including the ones in the Zwirner exhibition, are the only types of works Judd fabricated in Marfa. Though Flavin counters, “It doesn’t matter, they just happen to have been made there.”

But even the most uncompromising artists need to evolve, so goes the logical impulse. “To him, things either worked or didn’t, were good or bad-they weren’t about past or recent,” explains Flavin. “He was making pieces in ’91 that he had designed in the early ’60s, that he hadn’t gotten around to making. That’s not the typical way of working for an artist but it’s pretty indicative of how he thought.” Yet, when looking at a four-unit piece of yellow-lacquered wall boxes made in 1991, its wild pop of color visualizes Judd’s formal investigations and the limits of his ideology. How is the textural quality of Cor-ten and the blaze of yellow not a departure for the supposedly unchanging Minimalist? “The work remains more stable than anything else,” responds Flavin, as literally as Don’s own Literalist works.

UPDATE: This article has been amended to fix errors regarding Flavin Judd’s role at the Judd Foundation and Judd’s working methods from the late ’80s onward.