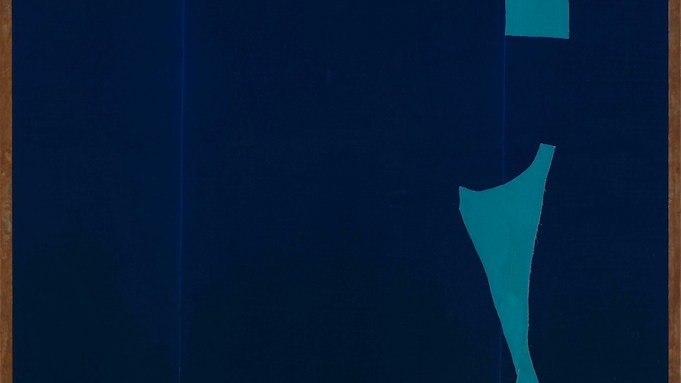 Julian Schnabel is now widely known for his work as a film director, but a new show reasserts his status and influence as a painter with an unconventional presentation of four large early paintings, which are being shown one at a time in a small storefront space. As visitors stand there with the painting looming over them, they might find that the experience illustrates a maxim Schnabel conveyed to A.i.A. in a phone conversation Wednesday: “Art brings you into its reality.”

“Julian Schnabel 1978–81” (through Mar. 30) includes one painting from each year of that four-year period, each on view for two weeks at Oko, an outpost of New York gallery Luxembourg & Dayan at 220 East 10th St., in New York’s East Village. Independent curator Alison Gingeras, who is overseeing the space, selected the canvases.

Raphael Rubinstein argued in A.i.A. in 2011 that Schnabel’s paintings have been unjustly obscured by his celebrity. “Astonishingly,” Rubinstein wrote, “Schnabel has not been given a museum exhibition in the U.S. since his Whitney midcareer survey of 1987.” He will, however, have an exhibition at New York’s Gagosian Gallery this fall, along with one at the Brant Art Foundation, in Connecticut. His work will also be featured in several upcoming group exhibitions in Europe.

Rarely exhibited in New York City, the paintings each stand for a body of work or, as a press release describes it, a “material gesture.” A veiled self-portrait from 1978, St. Sebastian, was the first work on view and represents Schnabel’s religious imagery. Blue Abstract Painting on Velvet (1980) will be the third painting in the sequence. A 7½-foot-wide fabric-only work in two shades of blue, it foretells, in its use of cloth in place of pigment, the work of young artists like Sergej Jensen, while The Mutant King (1981), the final work, featuring a deformed figure on a blank expanse of canvas, prefigures Joe Bradley and many other artists now making drop cloth paintings. Schnabel had been using the canvas, Gingeras explained to A.i.A. at the space on Wednesday, as a tarp over the plate paintings, which have broken crockery glued to their surfaces. These are the works for which the artist is best known.

Currently on view is the 9-foot-wide The Patients and the Doctors (1978), which went on view on Wednesday. It was the artist’s first multipanel painting featuring broken plates. Perversely, the painting is wider than the space, and is shown lengthwise, on a longer side wall. Viewers may find themselves pressing their bodies against the opposite wall in trying to get a view of the whole work.

“You can’t get back from the painting very far,” Schnabel acknowledged. “But you can get close to it. There’s something to be said for confronting something in a small space where you’re not comparing it to anything else, just scrutinizing that one thing.”

Speaking of the one-at-a-time presentation of large paintings in a tiny space, Schnabel said, “There’s something absurd about it, like there is about all art. At the same time there’s something very pure about it.”