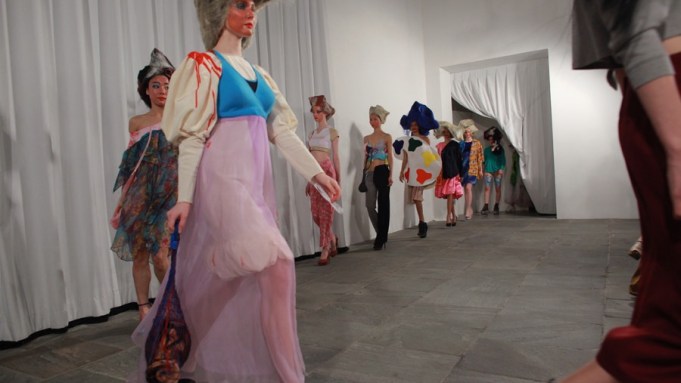 As part of her contribution to the current Whitney Biennial, where she is also showing sculptures and photos, queer-culture icon K8 Hardy staged Fashion Show in the exhibition’s fourth-floor performance space. Draping real models in her funky fashions-ingenious amalgams of thrift-store finds constituting a species of anti-couture—and sending them through a set designed by Oscar Tuazon (another Biennial artist), Hardy choreographed a fashion show that wound up straying not so very far from the genre it aimed to critique.

“I’m more interested in what I can do with the actual form, to screw it up and have us look differently at this very common visual presentation of bodies,” K8 Hardy tells poet Ariana Reines in the current issue of Bomb. The question hovering in the ear-shattering synth, a sound design by Venus X (and perhaps the most radical thing on offer, with its crazy mixture of dance beats, commercials and revved-up political yammer) was whether Hardy actually succeeded in “screwing up” anything in particular—certainly not, on the face of it, the kind of gender and power issues that consume her work elsewhere.

Ambition aside, it was a fun show. Models, their unsmiling faces smeared with greasy tan-colored makeup (by James Kaliardos) and wearing huge, outlandish wigs (by Duffy), robotically marched down the center of the “runway” on (mostly) absurdly high shoes. Climbing one set of stairs to Tuazon’s lofty wooden, steel-trussed catwalk, they paused in frozen poses that showed off their outfits, then made their way carefully down the steps at the other end. One of them fell no small distance, a scary-looking mishap that fortunately resulted in no serious injury.

A deconstruction of Alexander McQueen’s infamous misogyny? The show was too hip and arty to be scathing. Fabrics were a mash-up of diverse eras and social classes, as evoked in fancy chiffons and garishly colored, low-end polyesters. Animal motifs abounded-cheesy leopard, lovable kitten and a thumbs-up monkey. Brassieres of different colors appeared on the outside of garments, in one case constituting a weighty cluster recalling both ancient fertility goddesses and Louise Bourgeois. Clothes were sometimes swiped with paint strokes, and one model, wearing a gargantuan blue wig resembling some dismembered stuffed animal, was dressed as a painter’s palette.

Somehow it would be no surprise to see Hardy make the leap to the real deal in some future fashion week. Slumming style is nothing new, but presumably no one would spurn the high spirits.