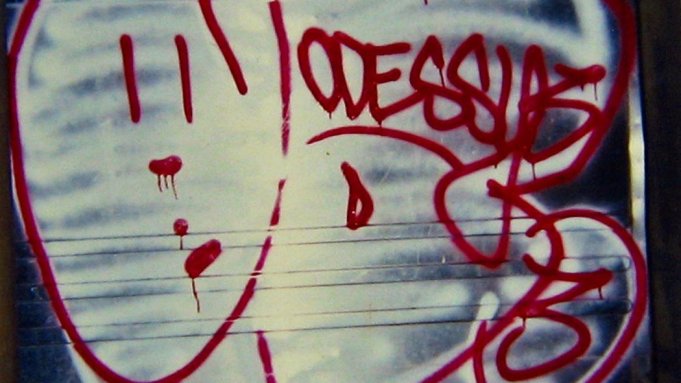 For the past decade, Wappingers Falls, New York-based Karlos Carcamo, born in San Salvador, El Salvador, has blended various historicized styles with a street aesthetic incorporating graffiti, hip hop culture, and his Latino heritage. Carcamo’s exhibition “Till the Break of Dawn” [April 7–May 14] at Dean Project, a gallery that recently moved from Long Island City to Chelsea, demonstrates how Carcamo samples art historical references like a DJ with an MFA.

A group of new paintings, “Writers Series” [2010–present], takes cues from early graffiti writing, and riffs on its impermanence in public space. Carcamo layers rectangles of solid and translucent pastel colors over a spray-painted tag, seeking to formally update Mondrian’s Broadway Boogie Woogie (1942–43) with the mysteriously seductive, hard-edge paintings of Peter Halley. They also invoke the spotty attempts the MTA makes at covering up graffiti.

Carcamo’s sampling of older art historical movements follows from DJ Spooky’s thesis, outlined in a 2006 panel discussion at NYU, whereby the DJ functions “not only as a social network but as a collaborative filter where people exchange and freely kind of engage in these transformative social sculptures as a way of making music better.” Carcamo told A.i.A. about a similar process of creative consumption: “I use many sources as starting points. My process is to build upon what is already there, what already exists. I think the word ‘sampling’ is the term that conceptually fits best in relation to my working process and how I think. It’s not 100 percent appropriation.”

As ODESSY3, Carcamo tagged in New York from 1980–87, employing a simple and clean style, layering color and tags as he does today in his fine art. Viewing a throw-up Carcamo painted on an F train in the mid-to-late ‘80s—a quickly painted white background with his tag and a sad-sack cartoony face inside the letter “O”—one recognizes the origins of his style.

A new series of collages also references aesthetics popularized in urban areas. Untitled (Grill) (2011) features the blingy sheen of a set of gold teeth juxtaposed with the red and blue colors of the Crips and Bloods. The work resembles a flag, a form of representation unavailable to the gangs. Carcamo previously covered entire photographs with tinted glass for a 2003 series of self-portraits in which he dressed like a gangster. In these “Tinted Portraits,” the artist’s specific representation is less at stake; more central is the use of sub-cultural references in a fine-art context.

Carcamo’s father brought the young Karlos and his sister to Jamaica, Queens, in 1973, fleeing political unrest in El Salvador. In 2009, Carcamo returned to El Salvador, meeting extended family members and participating in a group show, “Zonas de Trueque,” curated by Jose Ruiz at Museo de Arte de El Salvador. Carcamo created eight works for the exhibition, including A Concrete Movement (El Salvador) (2009), a sculpture using three vinyl records bought on the trip, bent at 90 degrees and glued together to create multiple planes. The work’s base comprises a piece of concrete pulled from the front sidewalk of the museum.

The sculpture references Lygia Clark’s “Bichos” series from the mid-1960’s, three-dimensional geometric and circular sculptural forms made from tin and hinges. The “Bichos” were interactive pieces that viewers were allowed to touch and manipulate into various configurations; she considered them social sculptures with no top or bottom. Carcamo’s version invites an expanded audience to participate, outside the space of the gallery.

A similar work, A Concrete Movement #1 (Ja Rule, 50 Cent, LL Cool J) (2009), was acquired by New York’s El Museo del Barrio and is part of an exhibition on view through December 11.

Yo La Tengo Are Beautifully Bummed on ‘This Stupid World’