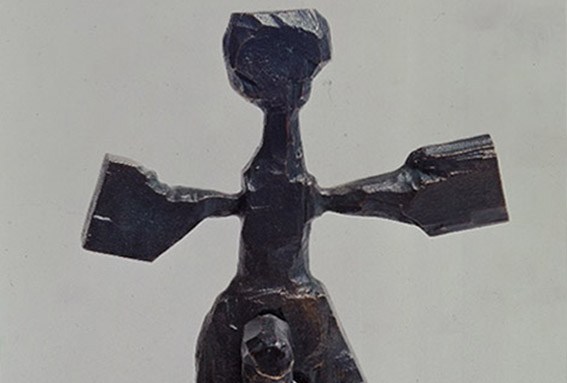 “I’ve visited this fair only once before,” confessed El Museo del Barrio chief curator Chus Martínez as she entered Pier 94, the contemporary art section of the Armory Show, during the preview today. A petite, intense native of Spain, she was wearing gold Adidas sneakers for her walkthrough with A.i.A.

Appointed to her post at El Museo in December, Martínez had just spent three years as part of the Documenta 13 curatorial team, while also serving as chief curator at MACBA, Barcelona. When you meet her, the dual role is not as surprising. She has more ideas in a single booth than others have in a day. She had just returned, she said, from a conference in Singapore, “where people are trying to articulate the Asian art scene.” She deadpanned, “There is a lot of money in Asia now.”

Just near the entry, she gravitated to the booth of Berlin gallery Sprüth Magers and a film installation by Argentinian-born multimedium artist David Lamelas. Though he has been working since the ‘60s, “He has been an inconnu,” she said, using the French word for unknown. Though the gallery’s program is generally quite European in character, Martínez opined, the works on view at the Armory would appeal to American audiences, who, she said, have an increasingly broad idea of “American” that encompasses Latin America.

Nearby, Martínez was brought to a halt by Diana Thater’s wall-hung, multi-monitor video pieces on flat screens at New York and London dealer David Zwirner’s booth. Nearly abstract and in a palette of midnight blue, they struck Martínez as painterly. “She is going to painting through media,” as she put it. “It’s almost techno retro.” Looking at one piece in which the monitors are arranged along two walls and meet seamlessly at the corner, she said, “It could almost serve as the skin of a building.”

At London’s Lisson Gallery hangs Intermission (Halloween Afghanistan V), 2013, an imposing 10-by-14-foot woodcut print by Allora & Calzadilla, showing a seemingly masked figure in a barren landscape, a road stretching out into the distance, where a fire burns. In an edition of three plus an artist’s proof, it’s priced at $125,000.

“Their work will be right at the opening of El Museo’s upcoming biennial this summer,” Martínez said. She pointed out that the title referred to one of the countries where dOCUMENTA 13, in which the artists were included, had a presence. Coincidence, she wondered? Admiring the giant woodcut print, she compared it to history painting or history tapestry, or like a film still from a road movie.

In a small room within Lisson’s booth, Martínez got excited about some small works by Carmen Herrera, a Cuban exile living in New York since the ‘50s. “She just started to sell her work in 2004, when she was 89 years old,” she said. “She’s a major figure in the history of Latin American abstraction, though, with many works in the Cisneros collection. She is one of New York’s living treasures.”

Martínez met London dealer Max Wigram in person for the first time at his stand during our visit, though they have worked together on many exhibitions over the last decade, they said. “It’s not all about glamour and champagne,” she said of the job of curator. “It’s about e-mails and budgets. Curators’ work has been highly idealized” in the public’s mind, she said.

At Wigram, she loved a wall-size piece, A Brief History of Sculpture, by Jose Davila, an artist from Guadalajara, Mexico. The work consists of multiple framed images of sculpture in which the work itself has been carefully cut out—examples by Bourgeois, Smithson, Gober and Calder, as well as The Thinker and Laocoön, have gone missing. “This work is about public space,” Martínez said, “and how the thing that is missing is the thing that actually creates public space.” When I laughed at the work’s humorous aspect, she warned, “It’s a joke but it’s not.”

Walking the aisles between dealers’ booths, Martínez said, “When I’m at a fair I often try to imagine what it would be like to visit as a collector—which I’m not. How do you start to build a collection? How do you make your decisions? What kinds of questions do you ask?”

Passing by Luciano Brito Gallery, from Sao Paulo, she waxed thankful for Brazil’s art scene. “Brazil is very vibrant. Everyone looks to them. I learn a lot from Brazilian artists about things like the interpenetration of painting and performance, or abstraction and politics.”

At Mai 36 Galerie, Zurich, she swooned over simple line drawings from the ’70s by Matt Mullican: “I must confess I love them.”

The gallery’s Victor Gisler piped up, “It’s a big year. His stick figure is turning 40.” Martínez explained that the recurring stick figure represents Glenn, his alter ego. “He has been undergoing hypnosis, where he explores fear in order to try to make the fear productive,” she said. Referring to his images of the man on a stage, she said, “It’s a beautiful exploration of the postmodern condition.”

At Brooklyn’s Pierogi Gallery, Martínez picked out a Mark Lombardi drawing, available for $12,000 and featuring his characteristic diagrammatic treatment, using lines to connect various entities, represented via circles. Lombardi famously created one drawing that plumbed the business connections among the Bush family and the Saudi elite, including Osama bin Laden, revealing just a few degrees of separation between the future president and the man who would become the world’s most wanted terrorist.

“I’m very grateful to Pierogi,” Martínez said. “I still remember the day I encountered Lombardi’s drawings in their flat files.”

The 15th edition of the Armory Show is open through Sunday, with over 200 exhibitors from 30 countries. Contemporary art is at Pier 94, and modern art at Pier 92, on Manhattan’s West Side.