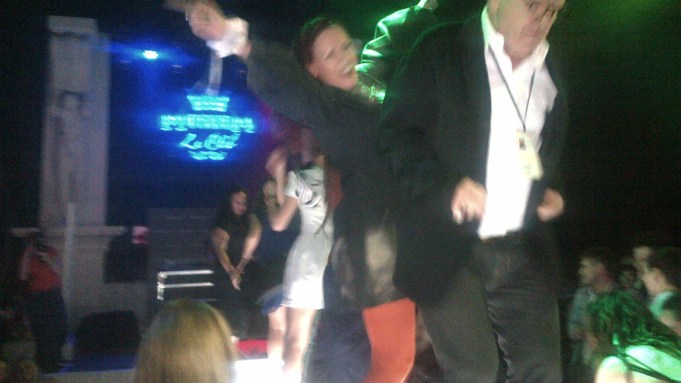 Earlier this month saw the belated opening of the first Kiev Biennale, “The Best of Times, the Worst of Times,” organized by British-born independent curator David Elliott. Showcasing over 250 works (40 of them new) by 100 artists, the biennial is the inaugural exhibition at the newly refurbished Mystetskyi Arsenal, a 200,000-square-foot former military base that will henceforth function as the National Cultural Art Museum Complex.

In spite of all this cause for celebration, the mood at the opening was subdued. “Firstly, I must apologize to the artists for the soft opening,” a composed Elliott told the crowd gathered outside the old arsenal building. “Soft opening” was the curator’s way of saying that some works were yet to be installed. He estimated that the show was 85 percent complete. A full week later Elliott reported via e-mail from Kiev that he was putting the finishing touches on the show, which, he said, was late because the building and grounds underwent significant transformation.

Participating Russian artist group AES+F sang the curator’s praises, especially for his last-minute efforts. Berlin-based Aleksandra Domanovic, who showed the video installation Turbo Sculpture (2010-12), which lacked sound at the opening, appreciated Elliott’s apology. Another artist told A.i.A., “This building looked in a very raw state up until a few days ago. The floors were not ready. Elliott has worked a miracle.” VIPs didn’t seem bothered by the soft opening and spent hours walking the two floors. As the crowds disappeared into the building, Dasha Astafieva, Hugh Hefner’s 55th anniversary playmate, stayed outside and posed before Choi Jeaong Hwa’s 36-foot-wide golden inflatable lotus, Golden Lotus (2012), installed in a basin of water.

A highlight was an entire room dedicated to Chinese artist Dong Song, which included the installation Wisdom of the Poor (2005-12). It included old-fashioned full-length mirrors, which some visitors used to fix their makeup. Louise Bourgeois’s impressive CELL (BLACK DAYS) from 2006 was installed near the entrance. Vyacheslav Akhuov’s Alley of Super Stars (2006-12), a red carpet featuring names of former dictators arranged Hollywood Walk of Fame-style, was a quiet political statement that allowed visitors to tread on the portraits of historical figures from Adolf Hitler to Osama bin Laden.

From Cartier and Graff to Dior and Chopard: The Best High Jewelry From Paris