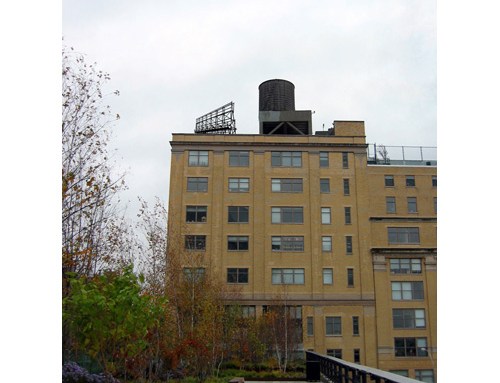 Kim Beck, a mixed-media artist based in Pittsburgh, has long been interested in exploring ubiquitous, often-overlooked spaces of the American landscape. “Self-Storage” (2005) is a series of layered, cut-paper constructions of anonymous, hutlike facilities scattered along any exurban highway. Beck also produced a pocketsize artist’s book Field Guide to Weeds (2007). The gutter of the book mimics a crack in the sidewalk, with leafy plants slowly spreading across each page; by the end of the book the pages are covered with a dense thicket of overlapping weeds.

On March 4, “Space Available,” Beck’s largest, most complicated project to date, will open New York’s elevated High Line park’s spring season. On the roofs of three buildings visible from the southern end are three 20-by-12-foot sculptures that look like the armature of an empty billboard. Signs along the High Line will direct visitors’ attention to the sculptures, and there will be a map pointing out the various locations. But both Beck and High Line curator Lauren Ross like the fact that it will take an attentive viewer to notice that they’re not supposed to be there.

The sculptures in “Space Available” are constructed like theater backdrops, so they look three-dimensional from a distance. Based on Beck’s perspectival drawings of billboards, they are mostly flat, cut out from large sheets of plywood and painted black. Only as you walk along the path and see them from different angles do you notice their surprising lack of depth. “Hopefully the piece will become activated by the physical gesture of walking,” Beck explained when we met, along with Ross, in the lobby of Beck’s midtown hotel earlier this month.

In 2008, Beck went on a trip to Mexico City. One photo she took there happened to include an empty billboard in the background, and from then on she started to notice them everywhere, both in Mexico and in the States. “The billboards in Mexico City are much more antiquated as structures. They’re made out of wood, and they’re stuck together in ways that look very improvisational. It seems like someone built each one of them,” said Beck, almost wistfully.

Beck and Ross scouted buildings along Washington Street and chose three that fit the bill: not so tall that you wouldn’t be able to see the sculptures from the vantage point of the High Line, or too short, creating an unwanted bird’s-eye view, or too cluttered with distracting HVAC systems, water towers and pipes. “Some building owners didn’t want to participate,” Ross said. “A lot of landlords really think only about the bottom line and so some people who we asked, the first question was, ‘Well, are you going to pay us rent?'” (The answer was no. Participating landlords donated the rooftop real estate free of charge.)

Throughout our conversation, Beck and Roth talked about the prevalence of empty billboards as symptoms of the current economy. I asked Beck if she saw any conflict in installing “Space Available” in the gentrified Meatpacking District. “No matter what, it points to the nature of the economy in a moment of shift. I like the contrast between a more boom-time part of the city and these ‘bust’ looking remnants of things that the economy left behind.”

“Space Available” will be on view from the High Line starting March 4, through the fall. In June, the High Line will again make use of adjacent buildings, re-staging Trisha Brown Dance Company’s 1971 Roof Piece, in which 8-12 dancers, then stationed on SoHo rooftops, mirrored each other’s movements.

SEE KIM BECK DISCUSS HER WORK FOR THE HIGH LINE.

What Streaming Service Is Tops With Viewers? It All Depends On Your Age