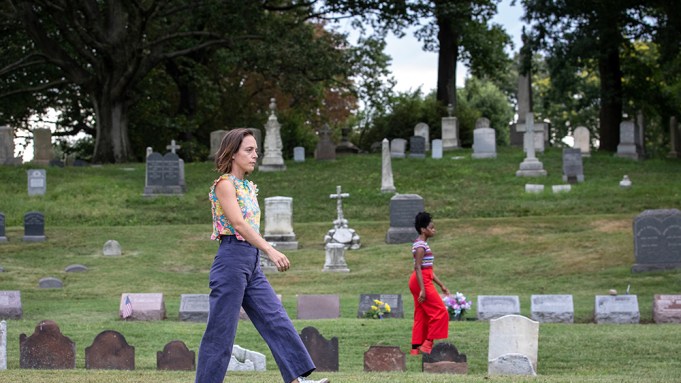 Kim Brandt’s distinctive style of stripped-down choreography employs a minimal vocabulary of movement and restrained pacing to construct and dissolve singular formal gestures. Nuance and detail rise to the surface. Her porous performances for large ensembles of dancers ask questions about how we coexist with one another and with our surroundings. Untitled (Green-Wood), 2019, commissioned by Pioneer Works and presented in the Green-Wood Cemetery on August 10, featured twelve performers walking in spacious loops, circuits, and spirals to articulate the distinctive landscape of Cedar Dell, a flat clearing ringed by tombstones. It was Brandt’s first work for an outdoor space, and her ongoing investigations of the relationships between the individual and the collective, and between movement and inertia, achieved new depth.

On the evening of the performance, a crowd gathered on blankets and leaned on weathered headstones on the hillsides surrounding the dell. According to the program, this beautiful and strange configuration of concentric circles of graves is meant to maximize burial space. About half an hour before the performance was scheduled to begin, I noticed performer Martita Abril walking purposefully down a hillside. The performance was already—almost undetectably—underway. As is often the case in Brandt’s choreography, Untitled (Green-Wood) did not announce its arrival.

Eventually, all twelve performers emerged. They formed a generously spaced, curving line as they walked along the crest of the hill, then dropped into a protracted spiral, arriving, gradually, to orbit the circular plot of tombstones below. Their casual two-piece combinations—orange pants and a muted floral top, jeans and a light-pink button up, checkered pants and a cream top—were striking against the green and slate landscape. Each performer strode with focus and presence. They took their time and intermittently fell in sync with one another in satisfying moments of entrainment.

Brandt said in an interview with Bomb that she develops each work through a collaborative process, building in “freedom for experience” for performers within her choreographic systems. The balance between individual agency and the execution of a set score that relies on the group’s interdependent relations was most evident when performers occupied Cedar Dell’s distinctive tombstone circle. Bodies began to collect, locking into tighter lines of four. The dancers splintered off into what appeared to be randomized radial paths eventually landing, one by one, around the periphery. From there, they gathered in a dense cluster in the center, where they remained—as a collective body, or a temporary monument—for an extended, breathing, pause. When movement broke the group kept close, in reverse course, flocking counterclockwise this time. The performance ended as it began: after dispersing up the hillside, they fell back into horizontal lines, re-articulating the landscape’s contours. We craned our heads back as they disappeared behind the audience, descending below the horizon, silhouettes against a salmon-colored sky. Over the course of the performance, the sun had begun to set.

The official duration of Untitled (Green-Wood) is about forty-five minutes, but if you count the time performers spent circuiting the site as the audience arrived, the piece probably clocks nearly two hours. Like all of Brandt’s work, the piece rewards attention. There is endless information about form, movement, site, and structure—and the ways in which all these elements directly influence one another—to be discovered. Yet, it also leaves space for the mind to wander. My focus dilated and contracted, shifting from the idiosyncrasies of an individual’s stride to the group’s spatial patterns to the quiet drama of the landscape—which, despite being home to the deceased, is very much alive and incredibly biodiverse—and back to the collective of bodies, only to realize an entirely new formal system had mobilized. Untitled (Green-Wood) unearths the beautiful and political and terrifying phenomenon of witnessing something unfold that you don’t realize is changing until it’s already entirely transformed.

Earlier this summer, Brandt presented a new work titled Corners as a part of the Shed’s “Open Call” exhibition of emerging artists. Carving out space in the center of a busy gallery, performers slowly assembled, folded over at the waist. For about half an hour they inched toward one another, morphing from a scattered plane to a tight mass, and spread back out again. Here, Brandt’s subtlety had a different impact than her expansive work at Green-Wood Cemetery, where I left feeling high with optical clarity. Corners, instead, felt more instructive of how one might more meaningfully encounter artworks. Her work often has this effect, as it is regularly presented in institutions that house both visual art and performance.

In 2014, during Dance and Process at the Kitchen in New York, Brandt made Untitled, which consisted of twenty-four dancers coming together in a pile, holding the hill-like form for as long as they could, then dispersing. The action took about six minutes. In 2016 she presented Clear Night, an eight-day run of performances in the sweeping main hall of Brooklyn’s Pioneer Works. Performers (sometimes just one, sometimes groups as large as thirty-four) explored mobile processes ranging in duration from fifteen minutes to four hours. Though there were set times indicating when each piece would take place, performance viewing conventions were dismissed—there was no set seating, visitors could come and go as they please, a different work was presented each day. It was less like a performance than an exhibition, albeit one in a constant state of change and transformation.

I worked with Brandt when I organized the 2017 In Practice group exhibition at SculptureCenter. Her work The Volume pushed the temporal conventions of performance even further toward that of the exhibition. She extended the choreographic cycle to take place over the course of a week, and the work as a whole could be considered an exhibition-length performance. Daily solo scores had dancers move, on the floor, through the narrow tunnels of SculptureCenter’s basement wing, culminating once a week in a group form that gradually accumulated in the ground-floor lobby and condensed in a corner. The Volume, like Brandt’s work in general, implicated the members of its audience in their environment, heightening their receptivity to an embodied encounter and asking them to consider the stakes of bearing witness.

Nike Accuses Bape of Ripping Off Its Sneaker Designs