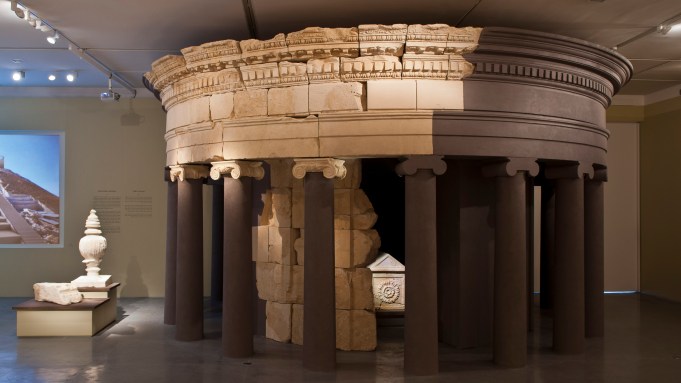 If walls could talk and stones could whisper, they’d hyperventilate in describing the colossal projects of King Herod (70 BCE-4 BCE) in the nation of Judea. His astounding constructions prove the truth of a quip by Israel’s first Prime Minister, David Ben-Gurion: “To be a realist in Israel you have to believe in miracles.” In one generation, Herod, fueled by megalomaniacal ambition, miraculously transformed Judea from a backwater province to an impressively up-to-date pseudo-Rome.

Since the 2007 discovery of Herod’s tomb in the city he built and modestly named Herodium, the Israel Museum in Jerusalem has worked with archeologists and conservators to sift through the dust of massive ruins, piecing together fragments for its exhibition “Herod the Great: the King’s Final Journey” (through Oct. 5).

The display is truly Herodian in scale, with 30 tons of material, including 250 artifacts like frescoes, sarcophagi, sculpture, mosaics and a partially reconstructed burial chamber. “It’s the most ambitious archeological exhibition we’ve ever undertaken,” museum director James Snyder said at the February press preview. “Astonishingly, it’s the first museum exhibition anywhere to focus on King Herod’s achievements as a regional, imperial ruler.” Alluding to Herod’s scurrilous reputation as a cruel despot, he added, “As a man-we won’t go there.”

This being the Middle East, as parlous as Herod’s character is the fact that some of the excavations occurred in the occupied West Bank. The material culture unearthed is claimed by both Israelis and Palestinians. According to the 1993 Oslo Accords, Israel has responsibility for antiquities until final agreements are reached on Palestinian autonomy. Co-curators David Mevorah and Silvia Rozenberg insisted at the opening that their work has preserved fragile artifacts, which will eventually be returned to the original sites.

Although claim to the heritage is in dispute, the quantity and quality of Herod’s architecture, engineering and city planning assure his works’ status as Wonders of the Ancient World. Herod scoffed at limitations of topography or arid climate, making the desert bloom with gardens, fountains, ornate baths and pools in his leisure complexes at Jericho, Herodium and Caesarea. He audaciously hung a three-tiered palace off the northern face of the Masada massif and literally moved a neighboring mountain to elevate his lofty, circular palace at Upper Herodium. In Caesarea, Herod built a deep-water port complete with 400-yard-long breakwaters constructed with the latest cement technology, a 5-mile-long aqueduct, a hippodrome for 10,000 spectators, and a theater for 4,000 beside his luxurious seaside villa and baths.

Herod’s most spectacular achievement was the mammoth Temple Mount complex in Jerusalem, built in 21-12 BCE. Fifty-foot-high ashlar-masonry walls (“the greatest walls ever heard of,” wrote local historian Josephus in the first century CE) supported a man-made platform the size of 26 football fields. The grandiose sanctuary was sheathed in dazzling gold panels, shining so brightly, Josephus noted, it was like looking at the sun. Multiple porticoes lined a basilica, flanked by 30-foot-high columns topped by gilded ionic capitals. “Herod builds in a big way,” Mevorah told A.i.A. at the preview, “but he takes care of details.”

The exhibition traces the 24-mile path of the King’s funeral procession from the throne room of his winter palace in Jericho to his mausoleum in Herodium. Highlights of the exhibition are sculptures of Herod’s friends among the Roman hierarchy (Marc Antony, Emperor Augustus along with his wife, Livia, and his most trusted lieutenant, Agrippa), a marble bathtub and mosaic floor from Herod’s palace in Cypros, a frescoed V.I.P. room where Herod entertained Agrippa at his theater, the King’s rose-colored, limestone sarcophagus, and architectural fragments from baths, fortresses, palaces and Herod’s tomb.

In a tragic twist of fate, Ehud Netzer, the Hebrew University archeologist who discovered the tomb after a 40-year search, died in 2010 after a fall on the site the morning he visited with a museum curator to discuss the exhibition. He was at the pinnacle of his career and “filled with joy,” co-curator Rozenberg told A.i.A.

“There could not be a stranger, more Biblical story in itself,” Snyder told the crowd at the opening, adding, “The exhibition is here. Alas, Ehud Netzer is not.”

Netzer’s quest for the final resting place of King Herod may have ended in his fatal fall, but the fruits of his life’s work begin a new chapter in our understanding of a king whom Josephus called “blessed with every gift of looks, body, and mind” yet a “slave to his passions.” Among his many violent acts, Herod defied Augustus’s plea for restraint and ordered his most beloved wife (one of 10, augmented by a harem of 500) put to death and his three sons, charged with treason, to be executed.

“In archeology we only discover one foot of the elephant,” Mevorah told visitors to the exhibition. “Then we realize there’s a whole lot more. I expect new discoveries.”