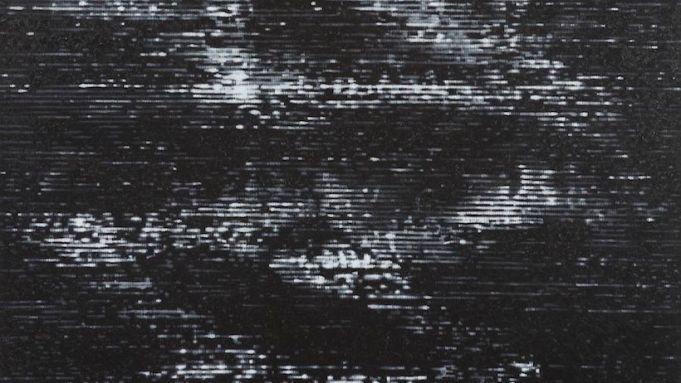 Erich Fromm’s 1956 book The Art of Loving—a treatise on developing one’s natural abilities toward authentic affection—includes a chapter titled “Love and Its Disintegration in Western Society.” The chapter argues that in Western culture capitalism has leeched meaning from relationships, causing contemporary society to view romantic partnerships as emblems of status. Kon Trubokovich’s new show, “Leap Second,” at OHWOW gallery in Los Angeles takes as its inspiration not just Fromm’s amorous call to arms, which advocates for the creation of authentic love divorced from money and ambition, but also the physical act and mental conception of disintegration.

Consisting of nine paintings, an audio installation and eight works on paper, the exhibition begins with Put my guns in the ground (all works, 2012), an oil-on-linen portrait that translates a video still of Trubkovich’s mom’s face, captured at a party. The portrait is accented with low-resolution video scan lines; the image is sliced through horizontally with seams of static, recalling a television screen displaying a paused video. The piece is followed by subsequent paintings of the same video still, each possessing less and less of the figurative elements of the first. “Each portrait becomes more distorted and more abstracted, one after the other,” Trubkovich told A.i.A., in his Brooklyn Navy Yard studio.

Complementing these works is a “self portrait” Trubkovich made of himself from an image of Lenny Bruce, I’ll die young, but it’s like kissing God (2012). “I wanted to do a self portrait, and I kept taking pictures of myself, and it wouldn’t work,” says Trubkovich, who felt that the show, which is in some ways an analysis of the parent/child bond, required him to represent himself. “When I used this image of Lenny, it looked more like me.” Trubkovich is oblique, however, when revealing how Lenny Bruce the human might relate to him, and to the image of his mother. “There was a reason I downloaded this particular image, of course,” says Trubkovich. “But how this image relates to me, and how this image relates to my mother-that’s a ball of yarn. Unraveling that ball of yarn would be so unfun.”

Born in Russia, Trubkovich emigrated to the United States with his mother when he was 11 years old. Fittingly, the image that spawned this series is derived from a video recording of a party the artist’s mother threw before moving to the States. “I’m really interested in this path of disconnection,” says Trubkovich. “Because I’m an immigrant, and also because I’m from a country that essentially no longer exists-the only connection I can have to Russia is a mnemonic connection, not a physical connection because the place I knew has disappeared. The way I can relate to the world is by emulating that disconnection. The connection is to the state of grace, not what’s really there now.”

Trubkovich also pays homage to Fromm by including a two-channel sound piece with a man and woman reciting the introduction to The Art of Loving. “Whenever I read Fromm, I think he feels the same way I do about disconnection,” he says. “I think that was a very common feeling for post-war Jewish thinkers, as they were trying to make sense of what happened.”

Other paintings in the show travel into the realm of near-pure to pure abstraction. When you’re eight years old nothing is your business (2012) depicts grey-toned video static and one barely legible word, “mama.” The painting acts as an aesthetic end point to the figurative portraits. “There’s a Talmudic idea of your mother being your original feeling of connection to the world, and to nature,” says Trubkovich. “For me, that’s slowly disappearing. So, in the work, her physical image slowly disintegrates into a metaphysical interpretation of mother, the word ‘mama’.” A final painting, If you can take the hot lead enema, then you can cast the first stone (2012), captures video static in electric purple and black tones. There is no semblance of text or figuration, as though the broadcast of Trubkovich’s maternal story had completely faded to static.

The images Trubokovich used for the “Leap Second” works are derived from technique that Trubkovich has developed over the past decade. The artist screens footage from videocassettes on his many video devices (portions of his studio recall a VCR repair center, circa 1987), then pauses the tape to find a paintable moment of intrigue. Trubkovich then distorts and degrades this specific image before rendering it in oil.

“The images I use are all derived from video,” says Trubkovich. Rather than employ a much more easily manipulated technology-digital-the artist uses videotapes as much for their degenerative qualities as for their aesthetic character. “Magnetic tape has a lifetime and it disintegrates and changes, which is different than digital,” says Trubkovich, who began painting expressionistic images from his imagination in the manner of de Kooning, before switching to using video images as the subject matter for his paintings. “It wasn’t until I realized that pushing the pause button and getting the different gesture each time was the same thing as the de Kooning painting gesture. I got really freed up,” says Trubkovich, emphasizing what he sees as the gestural qualities of video. “In my work, the pause is the abstract gesture.”