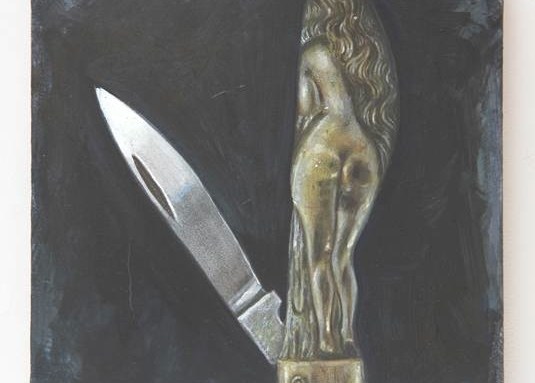 Saturday afternoon, a few days after a bustling opening at her Rivington Street gallery, Kristen Dodge heard an unsettling sound coming from the gallery’s main level. She was in the downstairs office chatting with artist Ellen Harvey, whose exhibition, “The Nudist Museum Gift Shop,” had opened the Thursday before.

In Harvey’s show, dozens of small to medium-size paintings of kitschy nude design objects the artist found on eBay and in junk shops—think mugs in the shape of breasts and Venus de Milo salt and pepper shakers—rested on a waist-high shelf.

Except they weren’t just resting on the shelf, they were attached to it with invisible strips of Velcro. That afternoon, when Dodge and Harvey heard the telltale sound of two strips of Velcro ripping apart, they immediately knew that something was amiss upstairs.

“They’ve nicked the paintings!” the British-born Harvey yelled to Patton Hindle, Dodge’s gallery director, who was also there that day.

Reached at the gallery earlier today, Dodge walked A.i.A. through her unexpected afternoon of crime-fighting.

As soon as she ran upstairs, Dodge noticed that a series of four knife paintings, worth $21,000 in total, was missing. Hindle called 9-1-1 while Dodge, making a lucky guess, turned right out of the gallery and began running down the street.

At the intersection of Rivington and Chrystie, Dodge, stumbling in her heels, saw a tall man in camo pants and a ski hat with four paintings tucked under his arm. By the time she kicked off her shoes, he had disappeared.

Dodge guessed that the suspect may have gone into the lumber yard across the street, and sure enough, he was at the check-out counter pretending to place an order. “I started yelling and cursing. I was really dressed up that day, but barefoot. The guys in there thought I was crazy. But I explained what was going on, that the guy was a thief, and told them to call the police.”

At this point, one of the employees saw the paintings stashed behind a stack of wood inside the shop. Dodge grabbed them and ran back to the gallery. “It was one of the most satisfying moments of my life,” Dodge said of returning the artwork unscathed to Harvey.

Back at the lumber shop, Dodge was informed that the suspect had left the store, and that no one knew who he was or where he had gone. By this time, the police had arrived at the gallery. Dodge joined them in a patrol car to canvass the neighborhood, but the would-be art thief was nowhere to be found.