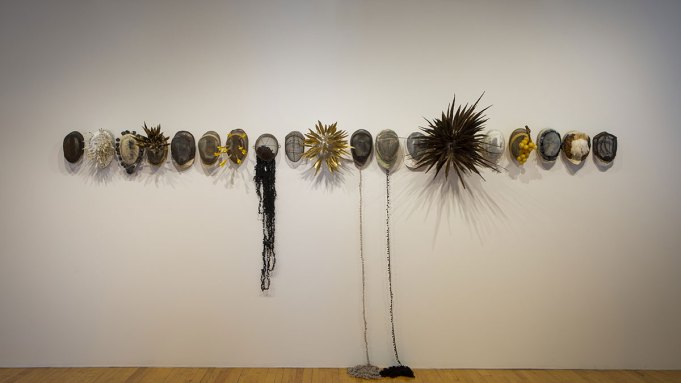 New York-based artist Allison Janae Hamilton is the subject of the First Look column in our March issue. While “the narrative of black experience in America has skewed toward urban life,” Eric Sutphin writes, Hamilton’s “films, photographs, and installations . . . explore the historical connections between African American life and nature.” Hamilton’s solo show, “Pitch,” is currently on view at MASS MoCA in North Adams, Massachusetts. Here, she introduces a compilation of Youtube videos that conjure special memories that are important to her artistic practice. —Eds.

I use YouTube primarily for music. I’ll look for a specific song to use for a reference when making an artwork, or to play in the studio, or maybe send to a friend. Here are some songs I’ve definitely searched for more than once on YouTube. Many of them bring back memories of growing up in Florida or being with my extended family in Tennessee. Some have inspired artworks.

Nina Simone, “Sinnerman.” This is a rendition of an African American spiritual about a man trying to hide from divine justice on Judgement Day. I love Simone’s version because it’s so hard to categorize—it’s this hybrid of blues, spiritual, rock, and even classical melodic structures. It shifts the song’s perspective: you sense the panic of this person searching for cover rather than the narrator’s judgement, which seems to expands the original spiritual’s metaphor. Last summer I did a residency at Recess in New York. We played this song over and over, several times a day, in a front porch installation that I built outside the space. I’d notice something different in the song each time it played.

George Clinton, “Atomic Dog” [Atomic Mix Long Version]. I got to know George Clinton a bit a few years back when interviewing him for my PhD dissertation. He lives in North Florida, near where my family is. One thing we discussed was how spirituality and ritual were embedded into his and his many bands’ music, specifically in his multi-layered song “Atomic Dog.” Years later, this conversation shaped how I imagined some of the elements in my current exhibition at MASS MoCA. I even constructed one of my yard sign sculptures with it in mind. It’s titled Yard Sign VI (Atomic Dog).

Arrested Development, “Tennessee.” I grew up in Florida but I call Tennessee my motherland. Our family farm is there, and throughout childhood I spent pretty much every summer and major planting season in Tennessee, visiting my mother’s side of the family and helping with the harvest. When this song, by the Atlanta-based hip-hop group Arrested Development, came out in 1992, I was seven years old, and its lyrics about the narrator journeying to a meaningful place—Tennessee—immediately resonated with me. I think Tennessee is one of the most beautiful places on earth; as a child this song made me feel like someone else thought so too.

Valerie June, “Tennessee Time.” Valerie June’s “Tennessee Time” is for me as an adult what Arrested Development’s “Tennessee” was for me as a child. I’ve been a big fan of the Memphis-bred singer-songwriter since I first saw her in concert at the Weeksville Heritage Center in New York in 2010. Eventually, I learned that she grew up in a small town only a few miles from our family farm. The rhythm and pace of her song, for me, clearly expresses the feeling of being in that small rural area in Western Tennessee.

Frankie Beverly and Maze, “Before I Let Go.” I did my undergrad at Florida State University in Tallahassee, which was right down the street from Florida A&M University. I hung out with a community of students from both schools. There would always be these huge parties after every step show, football game, etc. Without fail, Frankie Beverly and Maze’s “Before I Let Go” would play—at full length—toward the end of a party. I have no idea how this early ’80s song by the California soul group became such an anthem for us southern college kids in college during the early aughts, but there it was at absolutely every single party. We even had a line dance to go with it. The entire party would be swaying in rhythm from side to side, spinning around in sync, doing this complicated line dance. For those few moments the vibe would go from college party to family reunion barbeque. It always felt like this light-hearted, carefree interlude of innocence within the otherwise “cool” club environment. So today this song reminds me of us all in our late teens and early twenties—a group of kids from Miami and Orlando, rural towns like Ocala and Palatka, and Polk County and Duval County, and South Georgia, all figuring out their next steps in the world.

Funkadelic, “Maggot Brain.” Eddie Hazel’s guitar solo in this song is in my opinion one of the best guitar solos ever recorded. There are a few stories of how this song came about, all of which are gruesome. In one version of events, bandleader George Clinton asked Hazel to imagine being told that his mother had just died, only to discover moments later that she was still alive. Another legend is that Clinton’s inspiration for the song was finding his brother’s dead and decomposed body, skull cracked open, in an apartment in Chicago. The whole thing was recorded in a single take.

Dump Your Rolex for One of the Best Casio Watches