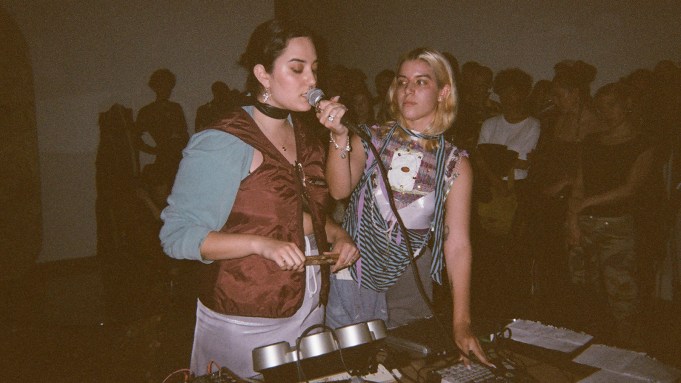 The raw songs Chloe Maratta and Flannery Silva have created as Odwalla1221 (formerly known as Odwalla88) paste together crisp, discrete imagery through their signature spoken-word delivery. On “Heart Shard,” which appears on the LP Earth Flirt (Ooga Booga Records, 2015), Silva chants over dull blasts of synthesized percussion: “Fallen letters, words with wings, mud on white tights, big girl lessons, flour in milk, a puddle of me.” These phrases come across as a mood board or collage. Within Odwalla1221’s sparse, electronic-based arrangements, language itself becomes an instrument.

Maratta and Silva started the band in 2013 while at art school in Baltimore, a city with a fertile and close-knit noise scene. The duo now lives in Los Angeles, and both maintain solo visual art practices. Their sound has precedents in acts like Martha Wilson’s 1980s no wave group Disband, a group of woman artists who performed spoken-word songs without instruments. It’s perhaps more directly related, however, to anti-bubblegum peers like Chicklette and Marcelline. Odwalla1221’s fifth album, Twiggy, was released last month on Some Ware, a Los Angeles-based music and clothing label founded by artists Cali DeWitt and Brendan Fowler. It is the band’s final release as Odwalla88; they adopted the moniker Odwalla1221 earlier this spring. The band isn’t looking to make any drastic changes in content or approach as they move forward as Odwalla1221. Rather, the new name feels “just fresh,” explained Silva. “Fresh air.” 1221 comes from the same intuitive place as Odwalla88 or Twiggy. “I looked it up,” Maratta said, “it’s an angel number, which we love.” The new challenges they’re seeking are, in a sense, largely formal. Noting that their songs tend to hover in the one- to two-minute range, they’re interested in writing a long record of durational songs.

Their latest record’s title comes from the nickname given to the small rental car the duo took on a cross-country tour in the fall of 2015, and documents those live sets, which were captured on a portable recorder. The performances were selected for the first side of the vinyl LP, Maratta told me, by considering “a mix of variables: the energy of the room, the mood of the night, the way that the recorder picked up the music, the sound system.” The other side contains the entirety of a performance in Olympia, Washington. The edited recordings luxuriate in background noise, the chatter of the rooms, or songs played before or after their sets. The record feels like a document of particular moments and places, and the band’s skeletal arrangements are complemented by a sort of atmospheric fuzz.

Their songs and performances, however, are inextricable from the visual; adornment plays no small role in the Odwalla project. Lyrics reference accessorizing, purses, and chokers. Collaborations with artist and designer Susan Cianciolo and the fashion label Women’s History Museum have yielded elaborate attire that the duo wears while performing. In the video for “Heart Shard,” styled by Women’s History Museum, Maratta and Silva pose in a series of shredded gowns and harnesslike netted layers. Their upcoming European tour includes a performance in the Some Ware presentation at Paris Fashion Week.

The range of venues they perform at has, they noted, gained them a perhaps suspect reputation as an “art band.” I imagine that such flexibility is also an asset in a precarious creative economy. While their punk-rock predecessors often responded to such precariousness by embracing minimalism, Odwalla1221’s take on DIY is propelled by embellishment, finding a sort of femme urgency in materials that might have once been coded as excess.

These associations with fashion belie—or perhaps complicate—Maratta and Silva’s bare-bones sound. In their live shows, each holds a mic and gazes unflinchingly into the audience, trading spoken phrases that sometimes overlap. Of their writing process, Maratta said, “the words part is kind of like a faucet.” Both contribute passages of lyrics, which, she continued, “are pushed or joined together.” Added Silva, “The words come naturally, and the sounds we forage.” They mentioned making lists of kinds of audio to seek out, and describe “surfing for sounds,” plumbing Youtube, snippets of live audio, and packs of samples on the file sharing network Soulseek. Driven by the rhythm of their spoken-word lyrics, these sounds are sparsely applied, providing scorched beats bookended by generous amounts of dry, empty space.

Their music takes an observational approach, drawing on what surrounds them, particularly elements of femininity. Their lyrical references to Girl Scout uniforms and mall jewelry conjure a specific experience of American girlhood, reworked to suggest something grown-up and biting. Their personal relationship is also a generative force. Maratta and Silva have a synchronized onstage dynamic. Their pared vocals come together less like a conversation or duet than two voices channeling the same emotional source. As a result, their friendship is sometimes interpreted to be the content or subject matter of their music, but it seems more apt to consider it as a raw material folded into their work. “Our lives are meshed,” Silva said. “We go through similar things, we write about similar things, we are attracted to similar things.” “It’s like there’s a little part in each of our brains that’s for each other,” continued Maratta. They described a shared language built on what Maratta called “deep references—clips and moments and snippets and experiences.”

Maratta and Silva premiered an art exhibition last weekend at the Schloss gallery in Oslo. For the opening, they performed on a stage they built as part of the exhibition, “an installation of our ideal special place to play,” said Maratta. A sheer pink curtain bisects the stage, veiling a giant pair of ballet slippers laid flat on the stage. Each has a yellow satin pillow, suggesting two sleeping bags the band might use after the performance ended. The environment serves as a home that isn’t tied to any one spot, anchored instead in its creators. Whether collaging experiences in sound, creating an outfit, or building an art installation, Odwalla1221’s practice grows out of what there is to do and make, un-do and un-make.